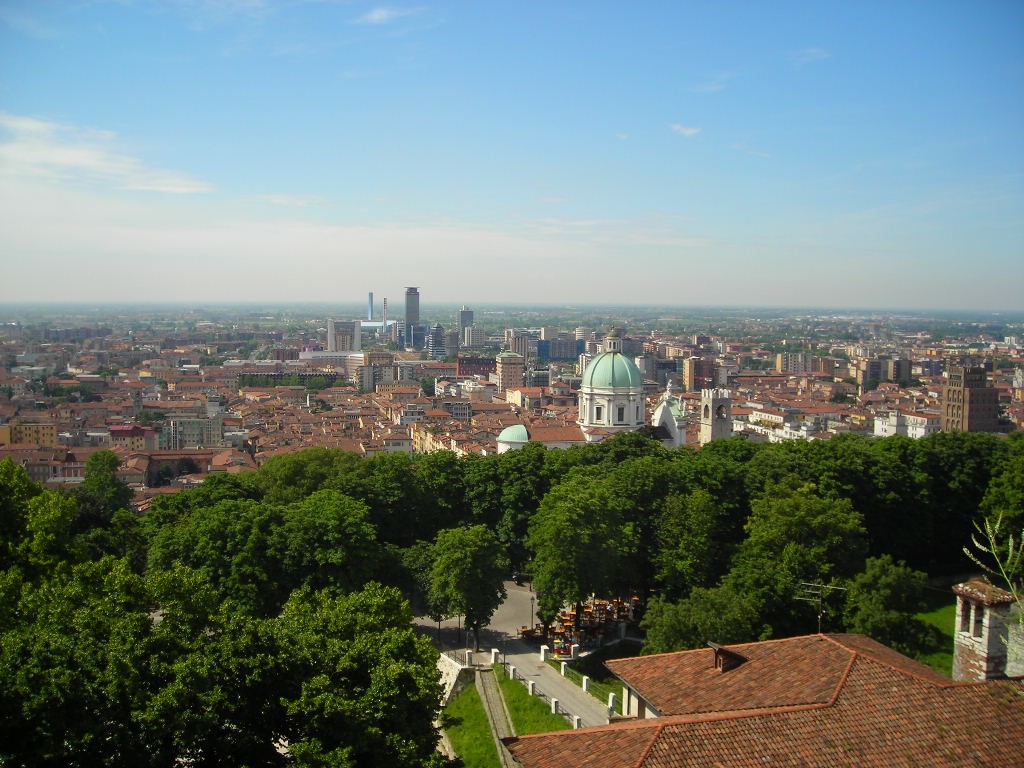 Brescia (Lombard: "Brèsa") is a city in the region of in northern . It is situated at the foot of the , between the Mella and the Naviglio, with a population of around 190000. It is the second largest city in , after the capital, .

The city is the administrative capital of the , one of the largest in Italy, with about 1200000 inhabitants. The ancient city of , Brescia has been an important regional centre since pre-Roman times and a number of Roman and monuments are preserved, among which is the prominent castle. The city is at the centre of the third-largest Italian industrial area, concentrating on mechanical and automotive and machine tools. Its companies are typically small or medium- sized enterprises, often with family managements. The financial sector is also a major employer, and the tourist trade benefits from the proximity of , and the Alps.

The plan of the city is rectangular, and the streets intersect at right angles, a peculiarity handed down from Roman times, though the area enclosed by the medieval walls is larger than that of the Roman town, which occupied the eastern portion of the present one. The Piazza del Foro marks the site of the forum, and the museum on its north side is ensconced in a Corinthian temple with three "cellae", by some attributed to Hercules, but more probably the Capitolium of the city, erected by in AD 73 (if the inscription really belongs to the building [cf. Th. Mommsen in "Corp. Inscrip. Lat." v. No. 4312, Berlin, 1872] , which was excavated in 1823. The museum houses a famous bronze statue of Victory, found in 1826. Scanty remains of a building on the south side of the forum, called the curia, but which may have been a basilica, and of the theatre, east of the temple, still exist.

Different mythological versions of the foundation of Brescia exist: one assigns it to , while another attributes it to "Altilia" ("the other Ilium") by a fugitive from the siege of . According to a further one, the founder was the king of the Cidnus, who had invaded the Padan Plain in the late . Other scholars attribute the foundation to the Etruscans.

Invaded by the Cenomani, allied of the Insubri, in the 4th century BC, it became their capital; the city became Roman in 225 BC, when the Cenomani submitted to Virginia. During the "Brixia" was usually allied of the Romans: in 202 BC it was part of a Celt confederation against them, but, after a secret agreement, changed side and attacked by surprise the Insubri, destroying them. Subsequently the city and the tribe entered peacefully in the Roman world as a faithful allied, maintaining a certain administrative freedom. In 89 BC it was recognized as "civitas" ("city") and in 41 BC received the Roman citizenship. founded a civil (not a military) colony here in 27 BC, and he and Tiberius constructed an aqueduct to supply it. The Roman Brixia had at least three temples, an aqueduct, an , a forum with a further temple built under , and some baths.

When Constantine advanced against in 312, an engagement took place at Brescia in which the enemy was forced to retreat as far as . In 402 the city was ravaged by the of . During the invasion of the under , the city was again besieged and sacked (452) while, some forty years later, it was one of the first conquests of the Goth general in his war against .

In 568 or 569 Brescia was occupied by the , who made it the capital of one of their semi-independent duchies. First duke was one Alachis, who died in 573. Later dukes included the future king and , and Alachis II, a fervent anti-Catholic who was killed in the batte of (688). The last king of the Lombard, , had been also duke of Brescia. In 774 captured the city and ended the existence of the Lombard kingdom in northern Italy.

Notingus was the first (prince-)bishop (in 844) who bore the title of (see ). Later the power of the bishop as imperial representative was gradually defied by the local citizens and nobles, Brescia becoming a free commune around the early 12th century. Subsequently it expanded in the nearby countryside, first at the expenses of the local landholders, and later against the neighbouring communes, notably and . Brescia defeated the latter two times at , and then at the Grumore (mid-12th century) and in the battle of the Malamorte(Bad Death) (1192). In the successive struggles between the Lombard cities and the emperors, Brescia was implicated in some of the leagues and in all of the uprisings against them. In the the contingent from Brescia was the second in size after that of . The (1183) that ended the war with confirmed officially the free status of the commune. In 1201 the "" made peace and established a league with , , and . Memorable is also the siege laid to Brescia by the emperor Frederick II in 1238 on account of the part taken by this city in the (, ). Brescia came through this assault victorious. After the fall of the , republican institutions declined at Brescia as in the other free cities and the leadership was contested between powerful families, chief among them the Maggi and the Brusati, the latter of the (pro-imperial, anti-papal) party. In 1258 it fell into the hands of Eccelino of Verona.

In 1311 laid siege to Brescia for six months, losing three-fourths of his army. Later the of Verona, aided by the exiled Ghibellines, sought to place Brescia under subjection. The citizens of Brescia then recoursed to John of Luxemburg, but expelled the governor appointed by him. His mastery was soon contested by the Visconti of Milan, but not even their rule was undisputed, as in 1406 took possession of the city, but in 1416 bartered it to , who in 1426 sold it to the Venetians. The Milanese nobles forced Filippo to resume hostilities against the Venetians, and thus to attempt the recovery of this city, but he was defeated in the (1427), near Brescia. In 1439 Brescia was once more besieged by , captain of the Venetians, who defeated , Filippo's . Thenceforward Brescia acknowledged the authority of Venice, with the exception of the years between 1512 and 1520, when it was occupied by the French armies under . Early in the 16th century it was one of the wealthiest cities of Lombardy, but has never recovered from its sack by the French. It subsequently shared the fortunes of the Venetian republic until 1796, when it came under Austrian dominion.

After the end of the ic era, Brescia was annexed to the Austrian puppet state called . Brescia revolted in 1848. It distinguished again for the revolt called the (march 1849), for which the poet called it "Leonessa d'Italia" ("Italian Lioness"), being the only Lombard town to rally to Charles Albert in the latter year; but was taken after ten days' obstinate street fighting by the Austrians under Haynau.

In 1769 the city was devastated when the Church of San Nazaro was struck by . The resulting fire ignited 90000 kg (200000 lb) of being stored there, causing a massive explosion which destroyed one sixth of the city and killed 3000 people.

Brescia was annexed to Italy in 1859.

The city was awarded a Gold Medal for its resistance against Fascism, in .

*"Piazza della Loggia", a noteworthy example of "piazza", with the eponymous (the current Town Hall) built in 1492 by the architect Filippino de' Grassi. On the square was the location of a terrorist bombing.
*"Duomo Vecchio" ("Old Cathedral"), also known as "La Rotonda". It is an exteriorly rusticated Romanesque church, striking for its circular shape. The main structure was built in the 11th century on the ruins of an earlier basilica. Near the entrance is the pink Veronese marble sarcophagus of Berardo Maggi, while in the presbitery is the entrance to the crypt of San Filastrio. The structure houses paintings of the "Assumption", the "Evangelists Luke and Mark", and "Feast of the Paschal Lamb" , and "Eli and the Angel" by Alessandro Bonvicino (known as "il Moretto"); two canvasses by , and other paintings by , , Bonvicino, and others [ [http://www.bresciainvetrina.it/bresciaarte/duomovecchio.htm#top| Duomo Vecchio] ] .
*"Duomo Nuovo" ("New Cathedral"): Construction on the new cathedral began in 1604 and continued till 1825. While initially a contract was awarded to Palladio, economic shortfalls awarded the project, still completed in a Palladian style, to the young Brescian architect , with decorative projects were directed mainly by . The facade is mainly owed to the designs Giovanni Battista and , while the cupola was designed by . Interior frescoes including the "Marriage, Visitation, and Birth of the Virgin", as well as the "Sacrifice of Isaac", were frescoed by Bonvicino. The main attractions is the "Arch of Sts. Apollonius and " (1510) [ [http://www.bresciainvetrina.it/bresciaarte/duomonuovo.htm| Duomo Nuovo.] ] .
*The "", formerly the Province Hall. It is a massive building of the 12th and 13th centuries with a lofty tower.
*In Piazza del Foro is the most important array of Roman remains in Lombardy. These include the Capitoline Temple, built by Vespasianus in 73 AD.
*The "monastery of San Salvatore" (or "Santa Giulia"), dating from the Lombard age but later renovated several times. It is one of the best example of High Middle Ages architecture in northern Italy.
*"" (1488-1523), with a fine façade by , decorated with bas-reliefs and a Renaissance "".
*The Romanesque-Gothic church of St. Francis, with a Gothic façade and cloisters.
*The castle, at the north-east angle of the town, commands a fine view.
*Church of "San Nazario e Celso", with the "" by .
*Church of "San Clemente", with numerous painting by (generally known as Moretto).
*Church of "San Giovanni", with a refectory partly painted by the Moretto and partly by .
*The , the local art gallery hosts works of the painters of the classical Brescian school, Romanino, Bonvicino, and Bonvicino's pupil, .
*Biblioteca Queriniana, containing rare early manuscripts, including a 14th-century manuscript of , and some rare .

The city has no less than seventy-two public fountains. The stone quarries of , 20 km east of Brescia, supplied marble for the in Rome.

Brescia is the start and the arrival of the historical car race that takes place every year in May and also the now defunct , one of the first ever sport motor races. It is also the home of football club and .