A foreign language is a language indigenous to another country. It is also a language not spoken in the native country of the person referred to, i.e. an English speaker living in Japan can say that Japanese is a foreign language to him or her. These two characterisations do not exhaust the possible definitions, however, and the label is occasionally applied in ways that are variously misleading or factually inaccurate. 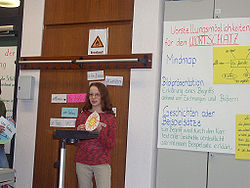 Some children learn more than one language from birth or from a very young age: they are bilingual or multilingual. These children can be said to have two, three or more mother tongues: neither language is foreign to that child, even if one language is a foreign language for the vast majority of people in the child's birth country. For example, a child learning English from her English father and Japanese at school in Japan can speak both English and Japanese, but neither is a foreign language to her.

In some countries, learners have lessons taken entirely in a foreign language: for example, more than half of European countries with a minority/regional language community use partial immersion to teach both the minority and the state language.

In 1995, the European Commission's White Paper on Education and Training emphasised the importance of schoolchildren learning at least two foreign languages before upper secondary education. The Lisbon Summit of 2000 defined languages as one of the five key skills[citation needed].

Despite the high rate of foreign language teaching in schools, the number of adults claiming to speak a foreign language is generally lower than might be expected. This is particularly true of native English speakers: in 2004 a British survey showed that only one in 10 UK workers could speak a foreign language and less than 5% could count to 20 in a second language. In 2001, a European Commission survey found that 65.9% of people in the UK spoke only their native tongue.[citation needed]

Since the 1990s, the Common European Framework of Reference for Languages has tried to standardise the learning of languages across Europe.

In 2004 a report by the Michel Thomas Language Centre in the United Kingdom suggested that speaking a second language could increase an average worker's salary by £ 3000 (€ 3 300) a year, or £145 000 (€ 159 000)in a lifetime. Further results showed that nine out of 10 British companies thought their businesses could benefit from better language skills. Studies show that a person that is bilingual or multilingual, can make a greater salary than a computer programmer or engineer because they can use their abilities in foreign language to obtain success in a wide range of career paths. Also due to the increase of international population, a multilingual person can easily communicate and translate to perspective viewers.

Other research has shown that early exposure to a second language increases divergent thinking strategies, helping not only in language-related tasks, but also in areas such as math. Children early on have different ways of expressing themselves, such that they better understand there is more than one way to look at a problem and that there is more than one solution.

There are not any major differences in different definitions that different writers have provided about foreign language and second language, although not many of them differentiate these two terms. The distinction between acronyms TESL (Teaching of English as a Second Language) and TEFL (Teaching of English as a Foreign Language) shows some attention of different researchers to the concepts of foreign language and second language.

Richards and Schmidt (2002: 472) provide this information about second language:

"In a broad sense, any language learned after one has learnt one's native language [is called second language]. However, when contrasted with foreign language, the term refers more narrowly to a language that plays a major role in a particular country or region though it may not be the first language of many people who use it. For example, the learning of English by immigrants in the US or the learning of Catalan by speakers of Spanish in Catalonia (an autonomous region of Spain) are cases of second (not foreign) language learning, because those languages are necessary for survival in those societies. English is also a second language for many people in countries like Nigeria, India, Singapore and the Philippines (plus Spanish), because English fulfils many important functions in those countries (including the business of education and government) and Learning English is necessary to be successful within that context. (Some people in these countries however may acquire English as a first language, if it is the main language used at home)."

They also define a "foreign language" as a language which is not the native language of large numbers of people in a particular country of region, is not used as a medium of instruction in schools and is not widely used as a medium of communication in government, media etc. They note that foreign languages are typically taught as school subjects for the purpose of communicating with foreigners or for reading printed materials in the language (Richards and Schmidt, 2002: 206).

Crystal (2003) notes that "first language" is distinguishable from "second language" (a language other that one's mother-tongue used for a special purpose, e.g. for education, government) distinguishable in turn from "foreign language (where no such special status is implied). He also notes that the distinction between the latter two is not universally recognised (especially not in the USA).

Stern (1983) believes that there is today consensus that a necessary distinction is to be made between a non-native language learnt and used within one country to which the term 'second language' has been applied and a non-native language learnt and used with reference to a speech community outside national or territorial boundaries to which the term 'foreign language' is commonly given. He argues that while the distinction between 'second' and 'foreign' has a certain justification, it is perhaps less important that it has sometimes been made out to be and it may be misleading. He notes that the distinction became popular after World War II in international organisations, such as UNESCO, in order to meet nationalist susceptibilities in discussions on language questions. Fasold and Connor-Linton (2006), Falk (1978) and Hudson (2000) provide similar definitions for the two terms. O'Grady et al. (1384) don't mention the exact terms 'second' and 'foreign' language, but they emphasise on the role of learning environment in teaching non-native languages.

There are some major differences between foreign and second language teaching and learning. In second language learning, one can receive input for learning both inside and outside the classroom. He or she can readily put to use what is learned, as can the child learning its first language, so lots of naturalistic practice is possible.

Second language learners are usually more successful in developing non-native language skills and what is learned may be essential for getting along in the community, so motivation is stronger.

Acculturation that is a main aspect of learning a language is easier in the case of second language learning and the emotional role of language (as opposed to communicational role) is easier to use for learners.

1. Psycho-social demands of classroom: The school classroom requires adjustment of the learner to the group processes, classroom discipline and procedures. The learner receives only a limited amount of individual attention. Regular attendance is required.

2. Preselected language data: The teacher generally introduces preselected target language items. Spontaneity is limited. A planned curriculum is followed with the teacher attempting to realize certain goals regarding the language that is to be learned.

3. Grammatical rules presented. The teacher may describe a rule in the native language to explain a grammatical structure. The teacher is expected to understand, assimilate and later apply the abstract rule.

4. Unreal limited situations. Situations for language use in the classroom are limited in variety and scope as compared to those outside of the classroom. The situations which are employed are often simulated.

5. Educational aids and assignments. In order to assist learning and achieve teacher goals, books, writing or a language lab, for example, may be used. Work assignments may be given to be completed in the class or at home.

There are some other issues in teaching and learning foreign language and second language including the type of motivation and the distinction between 'learning' and 'acquisition' that I will discuss them in separate parts.

There is often a distinction between acquisition and learning in linguistic and pedagogic literature. Children are described as 'acquiring' their native language, where there is no previous information and knowledge in their mind. On the other hand, adults are said to 'learn' a non-native language. Acquisition is viewed as a natural, unconscious, untaught and probably unteachable process, while learning is somewhat artificial, usually conscious and possibly dependent on instruction and study.

The distinction between acquisition and learning can be used in this discussion, because the general conditions in the case of second language offer opportunities for acquisition, because it is informal, free, undirected or naturalistic. On the other hand, educational treatment in the case of foreign language may offer opportunities mainly for learning.