/ˈpɛmbrʊkʃɪər/, /ˈpɛmbrʊkʃər/, or /ˈpɛmbroʊkʃɪər/; Welsh: Sir Benfro) is a county in the south west of Wales. It borders Carmarthenshire to the east and Ceredigion to the north east. The county town is Haverfordwest where Pembrokeshire County Council is headquartered.

The county is home to Pembrokeshire Coast National Park, the only coastal national park of its kind in the United Kingdom and one of three national parks in Wales, the others being Snowdonia and Brecon Beacons national parks.

Much of Pembrokeshire, especially the south, has been English in language and culture for many centuries. The boundary between the English and Welsh speakers is known as the Landsker Line. South Pembrokeshire is known as Little England Beyond Wales. 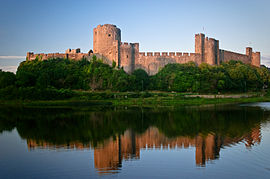 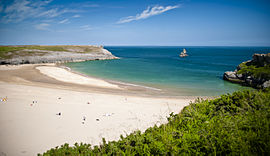 Pembrokeshire is a maritime county, bordered by the sea on three sides, by Ceredigion to the north east and by Carmarthenshire to the east. The local economy relies heavily on tourism but agriculture is still important. Since the 1950s, Petrochemical and liquid natural gas industries have developed along the Milford Haven Waterway.

The administrative headquarters, historic county town and largest town is Haverfordwest. Other settlements include Pembroke itself, Pembroke Dock, Milford Haven, Fishguard, Tenby, Saundersfoot, Narberth, Neyland and Newport. St David's, in the North west of the county, is the United Kingdom's smallest city with a population of around just 2,000.

The highest point of the county is at Foel Cwmcerwyn (1759 ft/536 m) in the Preseli Hills.

The county's coastline comprises internationally important seabird breeding sites and numerous bays and sandy beaches. Pembrokeshire contains a predominantly coastal park, Pembrokeshire Coast National Park, which includes a 186-mile walking trail, the Pembrokeshire Coast Path.[1] A large estuary and natural harbour at Milford Haven cuts deeply into the coast, formed by the confluence of the Western Cleddau (which goes through Haverfordwest), the Eastern Cleddau and rivers Cresswell and Carew. The estuary is bridged by the large Cleddau Bridge (toll bridge) which bears the A477 between Neyland and Pembroke Dock; upstream bridges are found crossing the Cleddau at Haverfordwest and Canaston.

Large bays are Newport Bay, Fishguard Bay, St Bride's Bay and a portion of Carmarthen Bay. There are several small islands off the Pembrokeshire coast, the largest of which are Ramsey Island, Grassholm Island, Skomer Island and Caldey Island.

In the north of the county are the Preseli Hills (Mynydd Preseli), a wide stretch of high moorland with many prehistoric monuments and the source of the bluestones used in the construction of the inner circle of Stonehenge in England.

Elsewhere the county is relatively flat, most of the land being used for lowland farming of dairy cows, arable crops, oil seed rape, and the well-known Pembrokeshire Potato.

Human habitation of the region of Pembrokeshire extends back to 125,000 and 70,000 BCE.[2] By the late Roman Empire period, an Irish tribe known as the Déisi settled in the region between AD 350 and 400, with their realm known as Demetae.

In the post Roman period, the Irish Déisi merged with the local Welsh, with the name of the region evolving into Dyfed, which existed as an independent petty kingdom until its heiress, Elen, married Hywel the Good in AD 904.[2]

Hwyel merged Dyfed with his own maternal inheritance of Seisyllwg, forming the new realm of Deheubarth.[2] The region suffered from devastating and relentless Viking raids during the Viking Age, with the Vikings establishing settlements and trading posts at Haverfordwest, Fishguard and Caldey Island.[2] 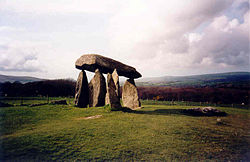 Dyfed, the region of Pembrokeshire, remained an integral province of Deheubarth but this was contested by invading Normans and Flemings who arrived between 1067 and 1111.[2] The region became known as Pembroke, after the Norman castle built in the Penfro cantref. But Norman/Flemish presence was precarious given the hostility of the native Welsh Princes. In 1136 Prince Owain Gwynedd to avenge the execution of his sister the Princess Gwenllian of Deheubarth and her children, with Gwenllian's husband the Prince Rhys swept down from Gwynedd with a formidable army and at Crug Mawr near Cardigan. There they met and destroyed the 3000 strong Norman/Flemish army. The remnants of the Normans fled across the bridge at Cardigan which collapsed and the Teifi river was choked with drowned Men at Arms and horses.

The county has long been divided between an English-speaking south (known as "Little England beyond Wales") and a historically more Welsh-speaking north, along an imaginary line called the Landsker.

The Lord Rhys, Prince of Deheubarth, Princess Gwenllian's son, reestablished Welsh control over much of the region and threatened to retake all of Pembrokeshire, but died in 1197.[2] After Deheubarth was split by a dynastic feud, Llywelyn the Great almost managed to retake the region of Pembroke between 1216 and his death in 1240.[2]

In 1457 Henry Tudor was born at Pembroke Castle and, 28 years later, landing an army not far from his birthplace, he rallied support, marched through Wales to Bosworth field in Leicestershire and defeated the larger army of Richard III. As Henry VII he founded the Tudor dynasty which successfully ruled England until 1603.

The Act of Union of 1536 divided the county into hundreds, which followed with some modifications the lines of the ancient division into cantrefs, which went back to before the Norman conquest. The 1536 hundreds were (clockwise from the north-east): Cilgerran or Kilgerran, Cemais or Kemes, Dewisland or Dewsland, Roose, Castlemartin, Narbeth and Dungleddy or Daugleddau. The Genuki web pages on Pembrokeshire include a list of the parishes within each hundred.

Narberth is home to Radio Pembrokeshire, Radio Carmarthenshire and Scarlet FM broadcasting to 100,000 listeners every week.[4]

A new voluntary media organisation called Cleddau Community Media began in Pembroke Dock in 2004. Since then the company has broadcast three community radio pilot broadcasts from custom built studios in Llanreath under the name.

There are five local newspapers based in Pembrokeshire. The most widely read is the Western Telegraph (part of the Newsquest group).

The artists Gwen John and her brother Augustus were both born in Pembrokeshire. Graham Sutherland painted locally between 1934 and 1936, gaining inspiration from the landscape.

The main towns in the county are well served with bus and train services, but those living in more rural parts have little or no access to public transportation.

The nearest motorway to the county town of Haverfordwest is the M4 which terminates at Pont Abraham in Carmarthenshire, some 46 miles (74 km) to the east.

The A477 which runs from St. Clears to the port of Pembroke Dock is 24 miles (39 km) long, of which only 2 miles (3.2 km) are part-dual carriageway. This road is heavily used by businesses and tourists visiting Pembrokeshire and improvements to the road have been made in recent years.

There are three branch railway lines, terminating at Fishguard, Pembroke Dock and Milford Haven. The latter two have 2-hourly services but the Fishguard branch has only 2 services each day, timed to meet the ferries to Ireland

Tenby, Saundersfoot and the surrounding areas attract the most visitors. 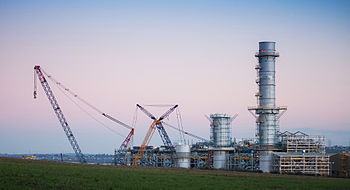 The banks of the Milford Haven Waterway are dominated by the oil and gas industry with two oil refineries, two large liquified natural gas (LNG) terminals and a new 2000 MW gas-fired Pembroke Power Station is currently under construction on the site of a previous oil-fired power station which closed in 1997 and demolished in 2000.

The two oil refineries in Pembrokeshire are:

At the peak, there were a total of five refineries served from around the Haven.

The LNG terminals on the north side of the river, just outside Milford Haven are now complete, and opened in 2008. A completed but controversial pipeline runs through many rural farms and country sides connecting Milford Haven to Tilbury in Gloucestershire.

Pembrokeshire's mild climate means that crops such as its famous new potatoes often arrive in British shops earlier in the year than produce from other parts of the UK. As well as arable crops such as potatoes, the other main agricultural activities are dairy farming of cattle for milk and cheese, sheep farming, beef production and some other arable crops, such as rapeseed.

Falling farm incomes have led to diversification into other novel farming and tourism related activities. From 1,700 km² of land, about 1,260 (74%) are used by agriculture. The majority of this land (60%) is down to permanent grassland and 26% is arable. Farm revenues are less than the UK average, but agriculture still provides 7,000 jobs.[citation needed]

The flag of Pembrokeshire consists of a yellow cross on a blue field. In the centre of the cross is a green pentagon bearing a red and white Tudor rose. The rose is divided quarterly and counterchanged: the inner and outer roses have alternating red and white quarters.[7][8]

On television and film

Pembrokeshire's diverse landscape of rugged coastline, unspoilt beaches, woodland, lakes, hills and quaint little villages have proved popular with film makers as a filming location for film and television. The following is a list of some of the productions that have utilised Pembrokeshire's landscape as a backdrop for their work: