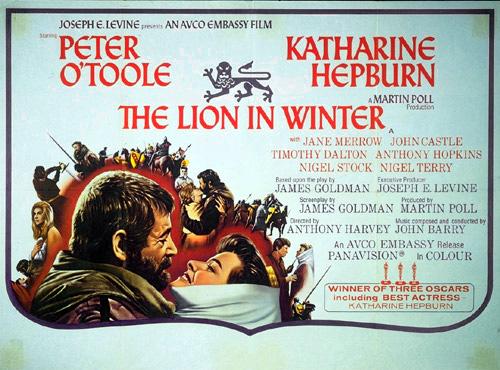 "The Lion in Winter" is a 1968 historical made by Avco Embassy Pictures, based on the Broadway play by . It was directed by and produced by from Goldman's adaptation of his own play, "".

"The Lion in Winter" occurs during at Henry 's château and primary residence in , , within the of medieval . Henry wants his son Prince John (1166-1216, the future King 1199-1216) to inherit his throne, while his wife Queen (whom he keeps locked in Salisbury Tower) wants their son Prince (1157-1199, the future King 1189-1199). Meanwhile, King , the son of Eleanor's ex-husband, has given his half-sister Alais, who is currently Henry's mistress, to the future heir, and demands either the wedding or the return of her dowry.

As a ruse, Henry agrees to give Alais to Richard and make him heir. He makes a side deal with Eleanor for her freedom in return for Aquitaine, to be given to John. The deal is revealed at the wedding, making Richard refuse to go through with it. Having believed Henry's intentions, John (at the direction of his other brother Prince (1158-1186)) plots with Philip to make war on England. Henry finds out, dismisses all three sons as unsuitable, and locks them in the dungeon. He makes plans to travel to Rome for an annulment, so he can have new sons with Alais, but she says he won't ever be able to release his sons from prison or they will threaten the new sons. Henry sees that she is right and condemns them to death, but can't do it and lets them escape. He and Eleanor go back to hoping for the future.

"The Lion in Winter" is fictional: there was no Christmas Court at Chinon in 1183; there was a Christmas court at in 1182; none of the dialogue and action is historic, though the outcomes of the characters and the background are historically accurate. In reality, Henry had many mistresses and many illegitimate children; the "Rosamund" mentioned in the film was Henry II's mistress until she died. The article on the describes the historical events leading to the play's events.

The film was shot at in , , and on location in Ireland, , and in at Abbaye de Montmajour, , Château de Tarascon, , and Tavasson, .

An interesting aspect of the film was that Hepburn was 61 years old and thus the same age that her character Eleanor of Aquitaine was in 1183, the film's plot year.

Hepburn won an for her role. The musical score by John Barry also won an Oscar, as did Goldman's adaptation of his play.