The Edge of Love

The Edge of Love 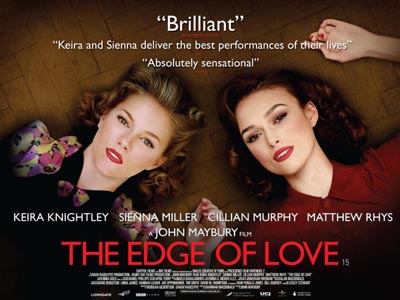 The story is based loosely on real events and people. During , Vera Phillips () runs into her first love, charismatic Welsh poet (), and their feelings for each other are renewed, despite that Dylan is now married to the spirited (). Despite their rivalry, the two women become friends and the trio have happy times together. When Vera marries soldier William Killick (), Dylan becomes jealous at the addition of him to the group, and Caitlin notices. But William is soon deployed abroad, and the remaining trio moves to the Welsh countryside, where Vera's feelings for Dylan intensify. When William comes home from the war, his jealousy compounded by his traumatic experiences explodes and he shoots up the house Dylan is staying in. All the actors give strong performances, but it is Keira Knightley and Sienna Miller who really shine. Essentially the movie centres upon their friendship. Despite the emotional turmoil and the conflict, brought about by the self adoring Thomas, the two women find ways to keep their understanding from snapping. [ [http://www.capitolfilms.com/Film/Edge_Of_Love_The "The Edge of Love"] , CapitolFilms.com. Accessed .]

Filming began in 2007. was attached to star in early 2007, but dropped out in late April 2007, just before filming was to begin. [ [http://www.dailymail.co.uk/pages/live/articles/showbiz/showbiznews.html?in_article_id=449865&in_page_id=1773&in_a_source= "Best of times? Not for Keira and Lindsay"] , "The Daily Mail", . Accessed .] Miller joined the project on . [Nicholl, Katie. [http://www.comingsoon.net/news/movienews.php?id=20028 "Miller, Not Lohan, Has the Time of Her Lives"] , Comingsoon.net, . Accessed .] When Lohan was attached to star, she told about the storyline, "Keira is older than me, but she kind of has a mysterious relationship with my lover and there's somewhat of a lesbian undertone" [ [http://www.lse.co.uk/ShowbizNews.asp?Code=RI165037R&headline=lindsay_lohans_lesbian_role "Lindsay Lohan's lesbian role"] , "Life Style Extra", . Accessed .] Dead link|date=October 2008 Screenwriter Macdonald, however, said there is no lesbian storyline. [Smith, David. [http://observer.guardian.co.uk/uk_news/story/0,,2068046,00.html "Keira's new scriptwriter is...her mum"] , "The Observer", . Accessed .]

The film made its world premiere opening the on . It will be released in London and Dublin two days later, with a Welsh premiere taking place in (the birth place of Dylan Thomas) on the same night, to be attended by . A national release follows in the and on .

Critics gave the film very good reviews. As of , the review aggregator reported that 91% of the T-Meter critics gave the film positive reviews, based on 11 reviews, with excellent reviews for both Knightley and Miller. [cite web|url=http://www.rottentomatoes.com/m/1189844-the_bank_job/ |title=The Edge of Love - Movie Reviews, Trailers, Pictures - Rotten Tomatoes |accessed |publisher=] The Hollywood Reporter critic Ray Bennett commented that the Edge of Love is a "wonderfully atmospheric tale of love and war" and stated about Knightley and Miller that; "the film belongs to the women, with Knightley going from strength to strength (and showing she can sing!) and Miller again proving that she has everything it takes to be a major movie star.". [http://www.hollywoodreporter.com/hr/film/reviews/article_display.jsp?&rid=11261."]

described the film as "inert" and said that the script was "flawed but not without merit" [http://www.bbc.co.uk/radio/aod/fivelive_aod.shtml?fivelive/kermode_200608] . felt that "Maybury's stylisation makes the film more interesting than it would have been if directed by your average British journeyman, but it finally adds up to earnest heritage romance. " [http://www.independent.co.uk/arts-entertainment/film-and-tv/film-reviews/the-edge-of-love-15-851886.html]

"The Edge Of Love" soundtrack was supervised by . It was recorded with the singers and . Siouxsie stated she performed one song for the soundtrack, as well as singing four tracks.