Dungans (Russian: Дунгане, Turkish: Tungani) are a people who call themselves and are called by Chinese and translated in Chinese language as Hui ("回族"). However, they are called "Dungan" by neighboring Turkic and Tajik peoples as well as by the Russians. They are an ethnic group of Persian origin. They are dispersed people, comprising the majority population of Ningxia Autonomous Region, and scattered in other parts of China. They also have middle-scale communities in Kazakhstan, Kyrgyzstan, Uzbekistan, and Russia.

The term “Dungan” is from the Turkic word döñän ("one who turns"), which has a similar meaning with the Chinese version of Dungans’ name "回回" (HuíHuí, "turnback"). The Chinese scholars tend to associate the name with Chinese word "东干" (Dong Gan), which means 'Eastern Gansu' (东甘), the region to which many Dungans can trace their ancestry. However the term "Dungan" ("Tonggan", "Donggan") has been used by Central Asian Turkic- and Tajik-speaking people for several centuries, and many Dungans can trace their ancestry to Shaanxi, therefore this theory is widely questioned (in fact, "Huihui" everywhere are referred to by Middle Asian Turks and Tajiks as Dungans). 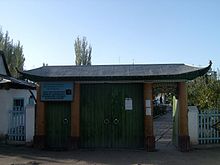 The gate of the Dungan Mosque in Karakol, Kyrgyzstan. The sign is in Kyrgyz—both in the Cyrillic script and a version of the Arabo-Persian script.

The Dungans, or as ancient Chinese called "Huihui", is originally Persians and Turks which resides in Khwarazm since ancient times. Yelü Dashi, the 12th-century founder of the Kara-Khitan Khanate, defeating the Huihui Dashibu (回回大食部) people near Samarkand – apparently, referring to his defeat of the Khwarazm ruler Ahmed Sanjar in 1141.[5] Khwarazm is referred to as Hui-hui-guo (which means “the country of Dungans”) in the Secret History of the Mongols as well.

Between 1220 and 1231, the Mongols crashed the Khwarazmids by order of Gengkis Khan, and forced local Persians, Turks and Bukharian Jews to serve for Mongol army in China, who were classified later by Mongols as Semu. The Semu from Khwarazm suffered greatly under the mistreatment of Mongol Empire. Genghis Khan forced foreign Jews and Muslims in China to stop Halal and Kosher methods of preparing food:[6]

Among all the [subject] alien peoples only the Hui-hui say “we do not eat Mongol food”. [Cinggis Qa’an replied:] “By the aid of heaven we have pacified you; you are our slaves. Yet you do not eat our food or drink. How can this be right?” He thereupon made them eat. “If you slaughter sheep, you will be considered guilty of a crime.” He issued a regulation to that effect ... [In 1279/1280 under Qubilai] all the Muslims say: “if someone else slaughters [the animal] we do not eat”. Because the poor people are upset by this, from now on, Musuluman [Muslim] Huihui and Zhuhu [Jewish] Huihui, no matter who kills [the animal] will eat [it] and must cease slaughtering sheep themselves, and cease the rite of circumcision.

Though classified higher than Han Chinese, Dungans eventually resisted the mistreatment of Mongol Empire with Han Chinese and constructed Ming Dynasty together. The Ming Dynasty employed many Dungans and the Ming Emperor treated Dungans relatively freely. Hui troops were also used by the Ming Dynasty to crush the Miao and other aboriginal rebels during the Miao Rebellions, and were also settled in Changde, Hunan, where their descendants still live.[7] Muslims in Ming Dynasty Beijing were given relative freedom by the Chinese, with no restrictions placed on their religious practices or freedom of worship, and being normal citizens in Beijing. In contrast to the freedom granted to Muslims, followers of Tibetan Buddhism and Catholicism suffered from restrictions and censure in Beijing.[8]

Among the whole Ming Dynasty, the comunication between Dungans and Middle Asia proceeded continuously. Joseph Fletcher cites Turkic and Persian manuscripts related to the preaching of the 17th century Kashgarian Sufi master Muhammad Yūsuf (or, possibly, his son Afaq Khoja) inside the Ming Empire (in today's Gansu and/or Qinghai), where the Kashgarian preacher is told to have converted 'ulamā-yi Tunganiyyān (i.e., "Dungan ulema") into Sufism.[9]

The Dungans first re-appeared in Middle Asia were prisoners and captive exiled from Gansu and Ningxia to Kuldja and Kashgar after the Revolt of Jahriyya Dungans caused by the imprisonment of Ma Mingxin. The Han Chinese sold the captured women and children to Middle Asian slavetraders. They mostly served in private wealthy households. After the abolition of slavery by the Russian conquest of Central Asia, female Dungan slaves still stayed where they were originally held captive, a Russian ethnographer Validimir Petrovich Nalivkin and his wife said that "women slaves almost all remained in place, because they either were married to workers and servants of their former owners, or they were too young to begin an independent life." Dungan women slaves were of mean status, and not regarded highly in Bukhara.[10]

Up to early 19th century, the Dungans became a major ethnic group in East Turkestan (Xinjiang). Marshall Broomhall, who has a chapter on "the Tungan Rebellion" in his 1910 book, referred the translation of the report on "Tungans" by an Ottoman writer named Abd-ul-Aziz. Abd-ul-Aziz divides the "Tungan people" into two branches: "the Tungans of China proper", as he also talks e.g. about the Tungans having 17 mosques in Beijing), and "The Tungans of Chinese and Russian Turkestan", who still look and speak Chinese, but have often also learned the Turkish language.[11] 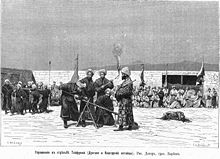 The Dungans currently exists in the former Soviet republics are refugees who fled China in the nineteenth century, escaping retaliation of Han Chinese after the Muslim uprising in Northwestern China. In this uprising Dungans and Uighurs united to resist the enslavery of Chinese.[12]

Muhammad Ayyub (Chinese: Bai Yan-Hu(白彦虎)) was the biggest leader of this Dungan uprising, often called by his followers Akhund Muhammad Ayyub or Imam Muhammad Ayyub (he was the highest Imam of Shaanxi). Under the pressure of Chinese Army, his army went to East Turkestan (Xinjiang), making an alliance with Yaqub Beg. After the falldown of Yaqub Beg, Muhammad Ayyub asked for protection of the Russian Empire. General Zuo Zongtang (called by Middle Asians as "Butcher Tso(Zuo)" for his responsibility to the massacre of millions of Dungan and Uighur civilians) demanded the extradition of Muhammad Ayyub and his followers, instantly refused by Russian government.

According to Rimsky-Korsakoff (1992), three separate groups of the Dungans fled to the Russian Empire across the Tengri Tagh during the exceptionally severe winter of 1877/78:

The next wave of re-immigration followed in the early 1880s. In accordance with the terms of the Treaty of Saint Petersburg (1881), which required the withdrawal of the Russian troops from the Upper Ili Basin (the Kulja area), the Dungans and (Uyghurs) were allowed to opt for moving to the Russian side of the border. Many chose that option; according to Russian statistics, 4,682 Dungans remained in Xinjiang moved to the Russian Empire under the treaty. They migrated in many small groups between 1881 and 1883, settling in south-eastern Kazakhstan and northern Kyrgyzstan.

The Dungans and the Russians maintain a very close and solid relationship. During the Russian Civil War, many Dungans joined Red Army to protect other Middle Asians and fight with White movement. Magaza Masanchi (Dungan: Магәзы Масанчын; Chinese: 马三奇) was their leader. Because of his bravery and leadership in Russian Civil War, Karakunuz was renamed Masanchi (sometimes spelt as "Masanchin") after him in 1965.

During World War II, most Dungan men are ordered for military service, during which many of them died. Mansuza Vanakhun (Cyrillic Dungan: мансуза ванахун; Mandarin Chinese:曼苏尔·王阿洪) was a Dungan National Hero who led a mortar battery.[13]

Dungan settlements in Kazakhstan and Kyrgyzstan 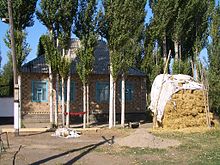 Nowadays many Dungan people live in cities such as Almaty, Taraz, Bishkek, Tokmok, Karakol, Tashkent, Andijan and Samarkand. Some of them still live in countryside.

The following table summarizes location of Dungan villages in Kazakhstan and Kyrgyzstan, alternative names used for them, and their Dungan population as reported by Ma Tong (2003). The Cyrillic Dungan spelling of place names is as in the textbook by Sushanlo, Imazov (1988); the spelling of the name in Chinese character is as in Ma Tong (2003).

The position of the Kazakhstan villages within the administrative division of Zhambyl Province, and the total population of each village can be found at the provincial statistics office web site.[14]

By the time of Khwarazmian dynasty the Dungans used Farsi (Persian), which had great currency among Dungans even after they were brought to China. Turkic languages and Arabic were spoken by foreingn residents in China, but the most important non-Chinese language was Persian, spoken by many of the conscripted artisans and soldiers from Central Asia, merchants and all the educated nobility and imams.[15] In 1289 the Mongol Qubilai (Hu-bi-lie) Khan (1260-¬94), on the recommendation of the department of state affairs (Shang-shu Sheng), established a Muslim national university in Da-du (Khanbaliq, modern Beijing) for “the sons of officials and the rich” (gong-qing dai-fu ji fu-min zhi zi); a scholar from the elite Hanlin academy, Yi-fu-de-ha-lu¬-ding (probably Efteḵār-al-Dīn) was charged with responsibility for teaching it.[16]

Since the Ming Dynasty the Dungans were restricted to use Persian in public, therefore the Dungans are forced to learn Mandarin as interracial language, mixing many Farsi words, which is now often called as Dungan language (Хуэйзў йүян or Huejzw jyian). After the Dungan uprising in 1860-1870s, with the arrival of Muslim Brotherhood, a few Dungans in China began to use Arabic instead of Persian privately, while remaining use Mandarin in normal life.

Unlike other minority nationalities in Central Asia, such as the Middle Asian Koreans, the Dungans are trilingual. More than two-thirds of the Dungans speak Russian, and a small proportion can speak Kyrgyz or other languages belonging to the titular nationalities of the countries where they live.

The Dungans are famous for their hospitality, bravery and respect of honor. The urban Dungans are mostly highly-respected rich merchants (some of them are bankers). Those who live in countryside are farmers, growing rice, vegetables and raise dairy cattles.

The Dungan culture are basically similar to other ethnic nationalities in Middle Asia, especially Tajiks. The Dungan crafts and cuisine have Persian origin. Although Dungan finery had been influenced by Chinese fashion in the past (men wore Ma Gua(马褂) with Taqiyah while women wore Cheongsam), the Dungans now wear Russian clothes with Ushanka.

Around the late 19th century the Bride Price was between 240 to 400 rubles for Dungan women. Dungans take other women such as Kirghiz and Tatars as brides willingly, or kidnap Kirghiz girls.[17] Though marriage customs of Dungans are conservative, Dungan men are allowed to marry Turkish girls, or even Russian and Jewish girls (in Middle Asia marriage between muslim men and non-muslim women are very common).

The Dungans who settle in Middle Asia define themselves as the descendants of Hui-hui-guo (Khwarezm) and an ethnic group of Middle Asia, rather than Chinese. But the Hui people in China, though share same blood and ancestry with the Dungans, consider themselves Chinese citizen and devote themselves to their country, meanwhile insist that they are an individual ethnic group and are not Han Chinese who converted to Islam. As Ding (2005) notes, "[t]he Dungan people derive from China's Hui people, and now live mainly in Kyrgyzstan and Kazakhstan. Their population is about 110,000. This people have now developed a separate ethnicity outside China, yet they have close relations with the Hui people in culture, ethnic characteristics and ethnic identity."

The Middle Asians also recognize Dungans and Han Chinese as two different groups. Marshall Broomhall’s book introduces "the name Tungan or Dungan, by which the Muslims of these parts [i.e., NE China] are designated, in contradistinction as the Chinese Buddhists who are spoken of as Kithay"; the reference to "Khitay" shows that he was viewing the two terms as used by Turkic speakers.[18]

The large majority of Dungans are Gedimu muslims, with a Sufi minority (mostly Jahriyya)[citation needed]. Many Dungan villages contain a mosque run by village elders. Islam came to the Dungans in the manner it came to Hui people. See the article on Gedimu, Jahriyya, Khwarazmian Dynasty, and Hui people for more information.