Chinese Australian (simplified Chinese: 华裔澳洲人; traditional Chinese: 華裔澳洲人; pinyin: Ào​zhōu​ huá​yì; Cantonese Yale: ou3jau1wa4yeui6​) is an Australian of Chinese heritage. In the 2006 Australian Census, 669,890 Australian residents identified themselves as having Chinese ancestry, either alone or with another ancestry.

The early history of Chinese Australians had involved significant immigration from villages of the Pearl River Delta in Southern China. Less well known are the kind of society Chinese Australians came from, the families they left behind and what their intentions were in coming. Many Chinese were lured to Australia by the gold rush. (Since the mid-19th century, Australia was dubbed the New Gold Mountain after the Gold Mountain of California in North America.) They sent money to their families in the villages, and regularly visited their families and retired to the village after many years, working as a market gardener, shopkeeper or cabinet maker. As with many overseas Chinese groups the world over, early Chinese immigrants to Australia established Chinatowns in several major cities, such as Sydney (Chinatown, Sydney), Brisbane (Chinatown, Brisbane) and Melbourne (Chinatown, Melbourne).

The White Australia Policy of the early 20th Century severely curtailed the development of the Chinese communities in Australia. However, since the advent of Multiculturalism as a government policy in the 1970s, many ethnic Chinese from Hong Kong, Mainland China, Taiwan, and Southeast Asia (Indonesia, Malaysia, Singapore, Vietnam, Cambodia) have immigrated to Australia.

In 2005-6 China (not including Hong Kong or Macau) was the third major source of permanent migrants to Australia behind the United Kingdom and New Zealand but with more migrants than from India. Between 2000–01 and 2005–06, the number of skilled migrants coming to Australia from China more than tripled, from 3,800 to 12,500 people.[1]

From the very beginning of the colony of New South Wales, links with China were established when several ships of the First Fleet, after dropping off their convict load, sailed for Canton to pick up goods for the return to England. The Bigge Report attributed the high level of tea drinking to 'the existence of an intercourse with China from the foundation of the Colony …' That the ships carrying such cargo had Chinese crew members is likely and that some of the crew and possibly passengers embarked at the port of Sydney is probable. Certainly by 1818, Mak Sai Ying (also known as John Shying) had arrived and after a period of farming became, in 1829, the publican of The Lion in Parramatta. John Macarthur, a prominent pastoralist, employed three Chinese people on his properties in the 1820s and records may well have neglected others.

Individuals such as Macarthur’s employees were part of the varied mix that was early Sydney Town. It was the increasing demand for labour after convict transportation ceased in the 1840s that led to much larger numbers of Chinese men arriving as indentured labourers, to work as shepherds and irrigation experts for private landowners and the Australian Agricultural Company. These workers seemingly all came from Fujian via the port then known as Amoy (Xiamen) and some may have been brought involuntarily, as kidnapping or the 'sale of pigs', as it was called, was common.

Between 1848 and 1853, over 3,000 Chinese workers on contracts arrived via the Port of Sydney for employment in the NSW countryside. Resistance to this cheap labour occurred as soon as it arrived, and, like such protests later in the century, was heavily mixed with racism. Little is known of the habits of such men or their relations with other NSW residents except for those that appear in the records of the courts and mental asylums. Some stayed for the term of their contracts and then left for home, but there is evidence that others spent the rest of their lives in NSW. A Gulgong resident who died at age 105 in 1911 had been in NSW since 1841 while in 1871 the Keeper of Lunacy still required the Amoy dialect from his interpreters.

Large numbers of Chinese people were working on the Victorian goldfields and fewer on the smaller NSW fields in the mid 1850s, when major gold finds in NSW and the passing of more restrictive anti-Chinese legislation in Victoria resulted in thousands of miners moving across the border in 1859. Many more Chinese goldseekers came by ship through Twofold Bay and Sydney and onto the various diggings. Fish curing, stores and dormitories in places such as The Rocks, soon developed to support the miners on the fields as well as those on their way to the diggings or back to China. The presence of numerous Chinese on the diggings led to anti-Chinese agitation, including violent clashes such as the Lambing Flat riots, the immediate result of which was the passing of an Act in 1861 designed to reduce the number of Chinese people entering the colony. 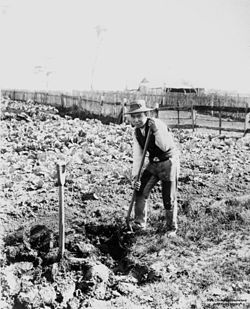 Colonies of Australia occurred in 1873 in the far north of Queensland at the Palmer River, and by 1877 there were 20,000 Chinese there. After the ending of this Queensland rush, people either returned to China or dispersed, including a significant number[quantify] coming into NSW either immediately or in subsequent years. This openness of the land borders and the rise in Chinese numbers after a period of decline again raised anti-Chinese fears in NSW, resulting in restrictive Acts in 1881 and 1888.

Mining was a risky endeavour and very soon after arrival Chinese people began trying other ways of earning a living. People opened stores and became merchants and hawkers, while a fishing and fish curing industry operating north and south of Sydney supplied dried fish in the 1860s and 1870s to Chinese people throughout NSW as well as Melbourne. By the 1890s Chinese people were represented in a wide variety of occupations including scrub cutters, interpreters, cooks, tobacco farmers, market gardeners, cabinet-makers, storekeepers and drapers, though by this time the fishing industry seemed to have disappeared. At the same time, Sydney’s proportion of the Chinese residents of NSW had steadily increased. One prominent Chinese Australian at this time was Mei Quong Tart, who ran a popular tea house in the Queen Victoria Building in Sydney.The Chinese were not very popular with the British-population as they found more gold from mining. 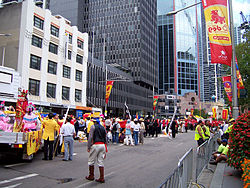 By the time of Australian Federation, there were around 29,000 ethnic Chinese in Australia:[2] Chinese people in NSW were a significant group, running numerous stores, an import trade, societies and several Chinese language newspapers. They were also part of an international community involved in political events in China such as sending delegates to a Peking Parliament or making donations at times of natural disaster. The NSW immigration restrictions of 1888 had not had a great impact on total numbers and a continued inflow of Chinese from Queensland mitigated even this. The passing of the Immigration Restriction Act of 1901, however, froze the Chinese communities of the late 19th century into a slow decline.

Continued discrimination, both legal and social, reduced the occupational range of Chinese people until market gardening, always a major occupation, became far and away the representative role of 'John Chinaman'. It was as gardeners that most pre-1901 now granted status as ‘domiciles’ under the 1901 Act, visited their villages and established families throughout the first 30 years or so of the 20th century, relying on the minority of merchants to assist them to negotiate with the Immigration Restriction Act bureaucracy. Only the rise of a new generation of Australian-born Chinese people, combined with new migrants that the merchants and others sponsored, both legally and illegally, prevented the Chinese population of NSW disappearing entirely.

By the war period numbers had nevertheless fallen greatly and Australian-born people of Chinese background began to predominate over Chinese-born people for the first time. Numbers increased rapidly again when refugees began to enter Australia as the result of Japan’s war in China and the Pacific. Some were Chinese crew members who refused to return to Japanese-held areas and others were residents of the many Pacific islands evacuated in the face of the Japanese advance. Still others included those with Australian birth who were able to leave Hong Kong and the villages on the approach of the Japanese. At the same time the anti-Japanese War helped inspire the development of organisations focused on China rather than the districts and villages of people's origin only, and aimed at making Australia aware of the danger of Japan and the need to assist China. A few of these organizations, such as the Chinese Youth League, survive to this day.

In the post-war period, assimilation became the dominant policy and this led to some extension of rights with gradual changes to citizenship laws. At the same time cafes began to replace market gardens as the major source of employment and avenue for bringing in new migrants, both legal and illegal. These changes, combined with the increased number of Australian-born Chinese, the final return of the last of the domiciles who still wished to do so and the arrival of Chinese background students under the Colombo Plan from various parts of Asia, brought about the end of the dominance of south China in the link between China and Australia that had existed for nearly 100 years.

Re-migration and multiculturalism: 1973 to the present 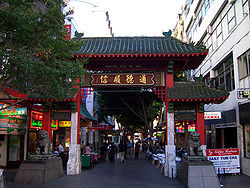 The final end of the White Australia Policy saw new arrivals from the Chinese diaspora and for the first time significant numbers from non-Cantonese speaking parts of China. The first wave of arrivals were ethnic Chinese refugees from Vietnam and Cambodia during the 1970s; this was followed by economic migrants from Hong Kong in the 1980s and 1990s, whose families often settled in Sydney while the breadwinner returned to Hong Kong to continue earning an income – a significant reversal of the traditional migration pattern.

New institutions were established for these arrivals and old ones such as the Chinese Chamber of Commerce revived; Chinese language newspapers were once again published. The equality of citizenship laws and family reunion immigration after 1972 meant that an imbalance of the sexes, once a dominant feature of the Chinese communities in Australia, was not an issue in these later migrations.

Chinese newspapers are published in Australia and three shortwave and longwave radio channels broadcast in Cantonese and Mandarin. The Australian public broadcaster SBS also provides television and radiprate on weekends. Chinese Australian social websites like 新足迹 (www.oursteps.com.au), FREEOZ (www.freeoz.org) also blossomed. Several Chinese Australians have received the Order of Australia award and there are current representatives in both State and Federal parliaments.

In the late 1990s, many of the suburbs in Sydney and Melbourne have turned to Satellite Chinatowns, such as the Chatswood area, Hurstville area, Carlingford/Eastwood/Epping area, Box Hill, Auburn, Burwood, Springvale, Beverly Hills, Glen Waverley, Campsie and Parramatta. 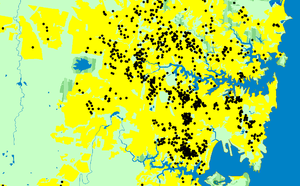 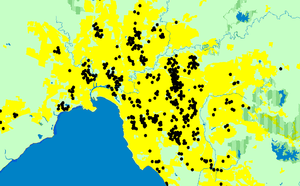 According to the 2006 Australian Census, 206,591 Australians declared they were born in China (excludes SARs and Republic of China (Taiwan)).[3] A further 71,803 declared they were born in the Hong Kong SAR, 2,013 in the Macau SAR and 24,368 in Taiwan:[3] a total of 304,775 or 1.5% of those counted by the Census.[4] Chinese ancestry was claimed by 669,896, either alone or with another ancestry, and Taiwanese ancestry was claimed by 5,837 persons.[5] The 2001 Australian Census reported that Chinese was the sixth most common self-reported ancestry.[6] Just under 40% of those claiming Chinese ancestry were born in mainland China, Hong Kong or Taiwan; 26% were born in Australia with other notable birth places being Malaysia (10%) and Vietnam (8%).[6]

In Sydney there were 292,338 persons, or approximately 7% of the population, who identified themselves as having Chinese ancestry (either exclusively or with another ancestry). Other Australian cities with large Chinese populations include Melbourne (182,550 or 5.1%), Perth (53,390 or 3.7%) and Brisbane (50,908 or 2.9%).[9] 53% of mainland China-born and 51% of Hong Kong born residents were enumerated in Sydney, while the largest portion of Taiwanese-born residents are in Brisbane (34%).

Chinese migrants are drawn from the Chinese diaspora. The 2001 Australian Census[citation needed] lists the main source countries and regions for overseas born ethnic Chinese as:

In the 2006 Census, among persons born in Mainland China, the religious breakdown was as follows: 57.8% declared no religion or atheism, 17.6% declared Buddhism, 15.1% declared Christianity, 0.6% declared other religions and 8.6% did not answer the question.[10]