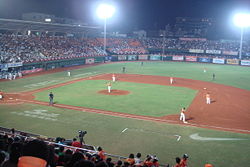 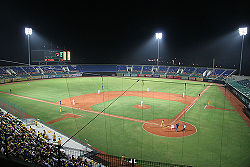 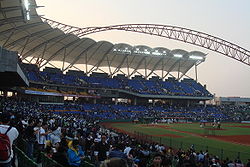 The Chinese Professional Baseball League (Traditional Chinese: 中華職業棒球大聯盟), or CPBL, is the top-tier professional baseball league in Taiwan. The league was established in 1989[1]. CPBL eventually absorbed the competing Taiwan Major League in 2003. As of 2008, the CPBL has four teams with average attendance of approximately 3,000 per game.

Baseball was first introduced to Taiwan during Japanese rule, and gained popularity when the national little league baseball teams won numerous Little League World Series championships in the 1970s and 1980s. The national baseball team also performed exceptionally well in many international competitions. However, the development of baseball in Taiwan was limited due to the lack of a professional league, and therefore many players were reluctant to commit to the sport.

The idea of forming a professional baseball league in Taiwan was first suggested and realized by local Brother Hotel's chairman Hung Teng-Sheng (洪騰勝). He formed his amateur Brother Hotel baseball team in 1984, and intended to professionalize his team and form a professional league within a few years. Throughout 1988 and 1989, Hung visited numerous Taiwanese businesses, trying to convince them to form professional baseball clubs. Most of his requests were rejected, but Wei Chuan Corporation, Mercuries Chain Stores, and Uni-President Corporation were supportive of his idea. The Chinese Professional Baseball League was established on October 23, 1989, with Hung Teng-sheng acting as secretary-general. Because of his contribution to baseball in Taiwan, Hung is sometimes referred to as the "Father of the CPBL."

In 1997, the newly founded Taiwan Major League presented a serious challenge to CPBL's monopoly of Taiwan's professional baseball industry. The two leagues engaged in a heated competition, and, after running at a loss, TML was finally absorbed by CPBL.

All teams are owned and named after large Taiwanese corporations, a similar pracitice seen in Japan's NPB and South Korea's KBO. Each team manages a regional market with a home city, but does not play its games exclusively in that market. Other than the home cities, regular season games are also held in Hsinchu, Douliou, Chiayi, Pingtung, Luodong, Hualien, and Taitung with less frequency.

Each season spans from March to October, with a one-week all-star break in June or July, which separates the season into first and second half-seasons. Playoffs are held in late October or early November, with three teams competing in two rounds. A team may qualify for playoffs either by winning a half-season title, or be awarded a wild card berth by attaining the highest place in the seasonal ranks. If a team wins a half-season title, it will not be considered in the seasonal ranks when the winner of the wild card is being decided. If both half seasons were won by the same team, another wild card berth will be given through the same mechanism after the first berth has been awarded.

Due to recent reduction in the number of teams, the regulation above may be modified to better apply to the current situation.

Since 2005 the champion team will represent Taiwan in the Asia Series to compete with other champion teams from Japan, South Korea and China's professional baseball leagues.

Foreign players, from regions other than Japan and South Korea, are given Chinese epithets to increase familiarity with Taiwanese fans. These epithets, usually two to three characters in length, are generally loose transliterations of the players' names and are generally chosen as terms meant to convey strength or might. One example is Jeff Andra, whose epithet is Feiyong (飛勇) — meaning, literally, a flying brave man. Recently however, most foreign players are just simply given a direct Chinese transcription. Some players (mostly foreign players) have now adopted the custom in the rest of the world by placing their surnames on the back of their jerseys using the Latin alphabet. 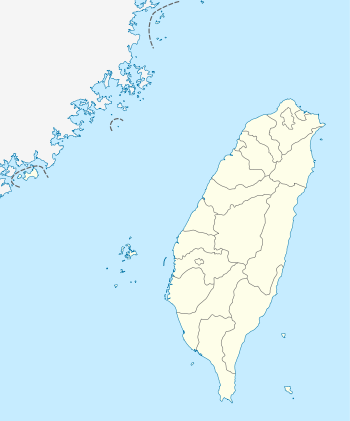 Bulls
Location of the member organizations

* Brother Elephants did not reach an agreement with Taipei County government, but nonetheless play their home games in the regional market.

CPBL Minor League took shape in late 2003 as a result of cooperation with Chinese Taipei Baseball Association. Alternative service draftees, players deemed eligible to complete their national service obligation in the field of baseball, were sent to CPBL member organizations to fill their roster. There are currently four minor league teams, each plays about 80 games annually. Similar to NPB's minor leagues, the minor league teams are each owned by CPBL members as reserve teams rather than independent organizations.

*Taiwan Series was not held in 1992, 1994 and 1995 because Brother Elephants and Uni-President 7-Eleven Lions won the titles by virtue of winning both half-seasons, resulting in no losers in the 3 seasons' Taiwan Series.

Rookie of the Year Award

CPBL Manager of the Year Award

CPBL MVP of the Month

Despite its young age, professional baseball in Taiwan had suffered game-fixing scandals several times. These led to sharp declines in game attendance.

The first sign of the scandals was the "August 3 Incident" when a group of weapon-carrying local gang members rushed into a Taichung hotel and threatened five Brother Elephants players, including then star pitcher Chen Yi-Hsin (陳義信), to cooperate with them and fix games for their gambling business in the evening of August 3, 1996. CPBL reported to the police immediately and the gang members were soon arrested, but rumors abounded.

The rumors came true in January 1997, just before the season started. With solid evidences, prosecutors arrested several CPBL players suspected of being in game-fixing operations. During the judicial process, more players, mostly from the China Times Eagles, were found involved in game-fixing and were promptly expelled by CPBL. In June 1997, only two Taiwanese players on the roster of China Times Eagles remained clean, and the other six teams had to lend their players to the Eagles for the team to finish the season.

China Times Eagles were disbanded the next year as a result, and CPBL's average attendance declined sharply, from the peak 6,000 in 1994 to merely 1,500 in 1998. However, the ordeal does not stop. In August 1997, several Mercuries Tigers players were threatened under similar circumstance as the August 3 Incident. In April 1999, Wei Chuan Dragons' then manager Hsu Sheng-ming (徐生明) was attacked near his Taipei residence. Mercuries Tigers and Wei Chuan Dragons also did not survive the financial loss brought about and closed down after the 1999 season. The whole event was later nicknamed as "The Black Eagles Incident" due to the fact that the China Times Eagles was most seriously involved.

In July 2005, another gambling-related scandal surfaced when local Next Magazine published a story with photographs of Chinatrust Whales' Australian pitcher Brad Purcell at a Taipei lounge bar along with several local gang members. This article further points out several suspicious games in May and June 2005, and listed nearly ten players involved, mostly foreign players.

Local prosecutor Hsu Wei-Yueh (徐維嶽) took up the case and imprisoned La New Bears catcher Chen Chao-Ying (陳昭穎) and Macoto Cobras coach Tsai Sheng-Fong (蔡生豐) on July 27, both of whom were immediately expelled. However, on August 22 Hsu released the two, stating that "they had made full confessions". Bradley Purcell himself had been released earlier by Chinatrust Whales and left Taiwan in advance before the judicial action started.

Hsu later summoned a total of near fifteen players, including Sinon Bulls American pitcher Jeff Andra, La New Bears Puerto Rican infielder Victor Rodriguez and Chinatrust Whales Dominican pitcher Emiliano Giron, and claimed they were implicated. None of them admitted to be involved but Hsu still ruled that most of them needed bail of NT$ 100,000 to be released. CPBL immediately expelled those players who needed to post bail. Only Brother Elephants and Uni-President Lions remain unaffected by this scandal.

The circumstance remains unclear, with the lack of investigative progress and indictments, and the fact that Hsu Wei-Yueh himself was later arrested for his involvement in a bribery scandals, which led to his trial and sentence in 2005.

On October 8, 2008, Banciao district attorney's office called the owner of dmedia T-REX Shih Chien-hsin, the team's GM, spokesperson, one coach, and three players to the office for alleged game-fixing scandal. The three players, Chen Yuen-chia (陳元甲), Chen Ke-fan (陳克帆), and Cory Bailey, were later released after posting their bails. In accordance with CPBL policy, the three were immediately expelled and they were banned from playing professionally in the league. Due to the involvement of management/operation personnel in the scandal, the team was expelled from CPBL on October 23, 2008.

Chinatrust Whales also announced its disbandment on November 11, after their twelve years history in CPBL. The league now has only four teams.

The day after the 2009 Taiwan Series's final game, authority raided Brother Elephants' dormitory in Taipei and ordered several players to report to the prosecutors' office for questioning regarding game-fixing allegation. In the following weeks, multiple players from Brother Elephants, Sinon Bulls, and La New Bears were questioned, and some of them were arrested and eventually charged. Furthermore, Elephants manager Shin Nakagomi was also charged and later plead guilty in exchange for being released and allowed to return to Japan. Some of the convicted players were given prison sentences ranging from one to four years.

The CPBL has long been criticized for lacking protection for players' rights, and players do not enjoy the benefits of a union like MLB, NPB, and KBO players. Players are often given one-year contracts that sometimes include terms that favor the management. Players do not have the freedom to join another team at the end of their contracts, since the CPBL does not have a free-agent system due to fears that teams with less financial backing could be forced out of the market. If a player wishes to join another team for any reason, he must acquire the consent of the original team or be barred from the CPBL. The restriction does not apply to players seeking to join a team in another country.

The CPBL is governed by a General Managers' Council, whose members are the general managers of each team. This is unlike professional baseball organizations in other countries, whose governing body usually consists of a committee of selected individuals unaffiliated with any member franchises. The CPBL governing structure effectively renders the league helpless in the regulation and enforcement of its policies, for it has no means to impose its rule over the member organizations. Since any reform would require a unanimous approval of the council, it is difficult to initiate reforms on a large scale.