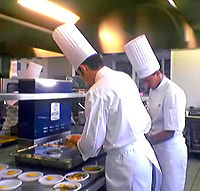 A cook is a person who prepares food for consumption. In Germany, Austria, Switzerland and Canada this profession requires government approval (examination after three years apprenticeship).

A cook is sometimes referred to as a chef, although in the professional kitchen, the terms are not interchangeable. The executive chef or sous chef is generally never referred to as a "cook."

The term "cook" within a restaurant kitchen usually refers to a person with little to no creative influence on a menu and little to no command over others within the kitchen, such as a line cook. These are usually all members of a restaurant kitchen that are underneath the sous chef in the brigade de cuisine. Other establishments may have a relatively constant menu, often only having people that can prepare food quickly and consistently, having little need for an executive chef or sous chef. The kitchens in these particular restaurants would thus be entirely run by cooks. An example would be a short order cook, who is a cook who prepares fast, easily-assembled meals to order, often working in a diner or cafe.

A head chef is a person in charge of one kitchen whereas an executive chef is in charge of more kitchens or of a larger kitchen-brigade. The name "executive" refers to the Latin meaning "acting" power, whereby the Property Manager (Director) or GM (General Manager) would be the "legislative" - deciding power.

When used of residential staff the word cook may refer to the head of the kitchen in a great house or to a cook-housekeeper, responsible for cleaning as well. See Cook (servant).

The first Olympic champion listed in the records was a cook, Coroebus of Elis, who won the sprint race in 776 BC.[1]

Saint Lawrence is said to be the patron saint of cooks. He is reported to have said as he was being burned at the stake in the third century, "I'm roasted on this side. If you want me well done, it's time to turn me over."[2]