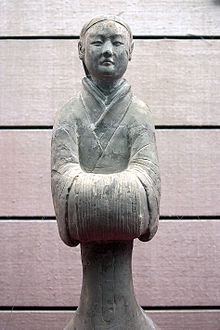 A domestic worker is a man, woman or child who works within the employer's household. Domestic workers perform a variety of household services for an individual or a family, from providing care for children and elderly dependents to cleaning and household maintenance, known as housekeeping. Responsibilities may also include cooking, doing laundry and ironing, food shopping and other household errands. Some domestic workers live within the household where they work.

Servant is an older English term for "domestic worker", though not all servants worked inside the home. 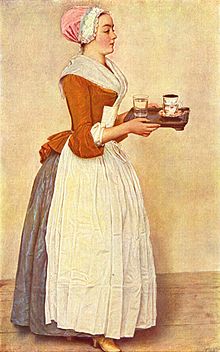 Domestic service, or the employment of people for wages in their employer's residence, was sometimes simply called "service". It evolved into a hierarchical system in various countries at various times.

The United Kingdom's Master and Servant Act of 1823 was the first of its kind and influenced the creation of domestic service laws in other nations, although legislation tended to favour employers. However, before the passing of such Acts servants, and workers in general, had no protection in law. The only real advantage that domestic service provided was the provision of meals, accommodation, and sometimes clothes, in addition to a modest wage. Service was normally an apprentice system with room for advancement through the ranks.

In Britain this system peaked towards the close of the Victorian era, perhaps reaching its most complicated and rigidly structured state during the Edwardian period, which reflected the limited social mobility of the time. The equivalent in the United States was the Gilded Age.

Current situation around the world 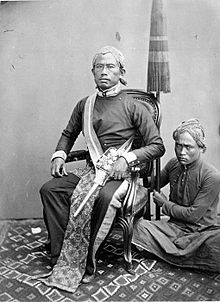 Aristocrat from Bandoeng with a servant sitting on the floor, Dutch East Indies, 1870s.

In July 2011, at the annual International Labour Conference, held by the ILO, conference delegates adopted C189, the Convention on Domestic Workers (2011) by a vote of 396 to 16, with 63 abstentions. The Convention recognizes domestic workers as workers with the same rights as other workers. The Convention text can be found on the ILO website here.

Throughout the world, most domestic workers are from the same country in which they work.[citation needed] They may live at home, though they are usually "live-in" domestics, meaning they receive room and board as part of their salaries. Because of the large gap between urban and rural incomes, and the lack of employment opportunities in the countryside, even an ordinary middle class urban family can afford to employ a full-time live-in servant. The majority of domestic workers in China, Mexico, India, and other populous developing countries, are people from the rural areas who are employed by urban families.

'In Guatemala, it is estimated that eight percent of all women work as domestic workers. They hardly have any legal protection. According to Guatemalan labour law, domestic work is “subject neither to a working time statute nor to regulations on the maximum number of working hours in a day”. Legally, domestic helpers are only entitled to ten hours of free time in 24 hours, and one day off per week. But very often, these minimal employment laws are disregarded, and so are basic civil liberties.' [1]

In Brazil, domestic workers must be hired under a registered contract and have most of the rights of any other workers, which includes a minimum wage, remunerated vacations and a remunerated weekly day off. It is not uncommon, however, to hire servants without registering them. Since servants come almost always from the lower, uneducated classes, they are sometimes ignorant of their rights, especially in the rural zone. Nevertheless, domestics employed without a proper contract sometimes sue their employers to get compensation from abuses.[citation needed]

In the United States, domestic workers are excluded from many of the legal protections afforded to other classes of worker, including the provisions of the National Labour Relations Act.[2] Traditionally domestic workers have mostly been women and are likely to be immigrants.[3] 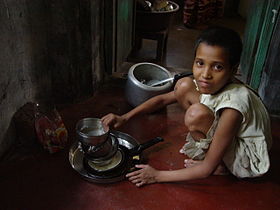 Child maid servant in India. Child domestic workers are common in India, with the children often being sent by their parents to earn extra money, although it is banned by the government.

The use of children as domestic servants continues to be common in parts of the world, such as Latin America or parts of Asia. Such children are very vulnerable to exploitation: often they are not allowed to take breaks or are required to work long hours; many suffer from a lack of access to education, which can contribute to social isolation and a lack of future opportunity. UNICEF considers domestic work to be among the lowest status, and reports that most child domestic workers are live-in workers and are under the round-the-clock control of their employers. [4] Some estimates suggest that among girls, domestic work is the most common form of employment.[5] Child domestic work is common in countries such as Bangladesh or Pakistan.[6] [7]It has been estimated that globally, at least 10 million children work in domestic labor jobs.[8] 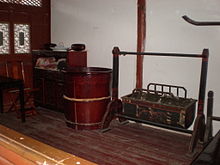 Servant's room in the Mu Mansion located in the Old Town of Lijiang, Yunnan

Employers may require their domestic workers to wear a uniform, livery or other "domestic workers' clothes" when in their employers' residence. The uniform is usually simple, and was even in the 19th century and 20th centuries. Female servants wore long, plain, dark-coloured dresses or black skirts with white belts and white blouses, and black shoes, and male servants and butlers would wear something from a simple suit, or a white dress shirt, often with tie, and knickers. In traditional portrayals, the attire of domestic workers especially was typically more formal and conservative than that of those whom they serve. For example, in films of the early 20th century, a butler might appear in a tailcoat, while male family members and guests appeared in lounge suits or sports jackets and trousers depending on the occasion. In later portrayals, the employer and guests might wear casual slacks or even jeans, while a male domestic worker wore a jacket and tie or a white dress shirt with black pants, necktie or bowtie, maybe even waistcoat, or a female domestic worker either a blouse and skirt (or trousers) or a dress.

Many domestic workers are live-in domestics. Though they often have their own quarters, their accommodations are not usually as comfortable as those reserved for the family members. In some cases, they sleep in the kitchen or small rooms, such as a box room, sometimes located in the basement or attic. 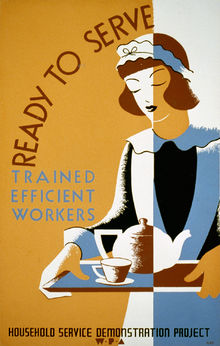 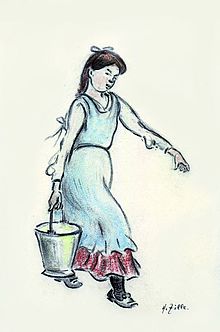