The province is located in the southwest of the country, and includes Mangyshlak Peninsula. It has much of Kazakhstan's Caspian Shore. It also borders neighboring countries Turkmenistan and Uzbekistan. Mangystau also borders two other Kazakh provinces(counter-clockwise), Aktobe Province and Atyrau Province. The area of the province is 165,600 square kilometers. Engineers discovered petroleum in the area in the days of the Soviet Union, drilling commenced, and much of the area was built up around the industry.

Due to its vast territory, the province has a wide variety of climate conditions. The climate of north Mangystau is cold in winter due to its settlement in Usturt plateau, the location of the plateau is mainly above sea level. On the whole, the climate is continental with cold winters and mild summers. The average temperature −3 °C (27 °F) in January and +26 °C (79 °F) in July. The average annual rainfall is 150 millimetres (5.9 in).

The first written sources on Mangystau province dates back to the 1890s. 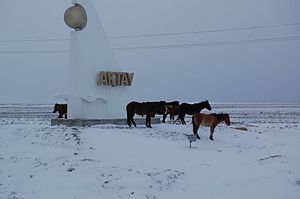