Mooncake
Not to be confused with Moon pie.

Mooncake (simplified Chinese: 月饼; traditional Chinese: 月餅; pinyin: yuè bĭng) is a Chinese bakery product traditionally eaten during the Mid-Autumn Festival / Zhongqiu Festival. The festival is for lunar worship and moon watching; mooncakes are regarded as an indispensable delicacy on this occasion. Mooncakes are offered between friends or on family gatherings while celebrating the festival. The Mid-Autumn Festival is one of the four most important Chinese festivals.

Typical mooncakes are round or rectangular pastries, measuring about 10 cm in diameter and 4–5 cm thick. A rich thick filling usually made from red bean or lotus seed paste is surrounded by a relatively thin (2–3 mm) crust and may contain yolks from salted duck eggs. Mooncakes are usually eaten in small wedges accompanied by Chinese tea. Today, it is customary for businessmen and families to present them to their clients or relatives as presents,[1] helping to fuel a demand for high-end mooncake styles. Mooncake energy content can vary with the filling and size; the average moon cake carries 800 to 1200 kcal, mainly from fats and sugar. 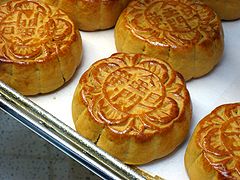 Most mooncakes consist of a thin, tender skin enveloping a sweet, dense filling, and may contain one or more whole salted egg yolks in its center to symbolise the full moon. Very rarely, mooncakes are also served steamed or fried.

Traditional mooncakes have an imprint on top consisting of the Chinese characters for "longevity" or "harmony", as well as the name of the bakery and the filling inside. Imprints of the moon, the Chang'e woman on the moon, flowers, vines, or a rabbit (symbol of the moon) may surround the characters for additional decoration.

Mooncakes are considered a delicacy; production is labor-intensive and few people make them at home. Hence, most prefer to buy them from commercial outlets, which may range from smaller individual bakery shops to high-end restaurants. The price of mooncakes usually ranges from US$10 to US$50 for a box of four, although cheaper and more expensive mooncakes can also be found.

The festival is intricately linked to the legends of Chang E, the mythical Moon Goddess of Immortality. According to "Li-Ji", an ancient Chinese book recording customs and ceremonies, the Chinese Emperor should offer sacrifices to the sun in spring and the moon in autumn. The 15th day of the 8th lunar month is the day called "Mid-Autumn". The night on the 15th of the 8th lunar month is also called "Night of the Moon". Under the Song Dynasty (420), the day was officially declared for Mid-Autumn Festival.

There is a folk tale about the overthrow of Mongol rule facilitated by messages smuggled in moon cakes.

Mooncakes were used as a medium by the Ming revolutionaries in their espionage effort to secretly distribute letters to overthrow the Mongolian rulers of China in the Yuan dynasty. The idea is said to have been conceived by Zhu Yuanzhang (朱元璋) and his advisor Liu Bowen (劉伯溫), who circulated a rumor that a deadly plague was spreading, and the only way to prevent it was to eat special mooncakes. This prompted the quick distribution of mooncakes, which were used to hide a secret message coordinating the Han Chinese revolt on the 15th day of the eighth lunar month.[2] 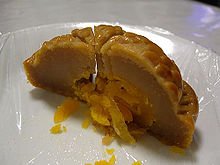 Many types of fillings can be found in traditional mooncakes according to the region's culture:

Traditional mooncakes vary widely depending on the region where they are is produced. Most regions produce them with many types of fillings, but with only one type of crust. Although vegetarian mooncakes may use vegetable oil, many mooncakes use lard in their recipes for a better taste. Three types of mooncake crust are used in Chinese cuisine:

There are many regional variants of the mooncake. Types of traditional mooncake include: 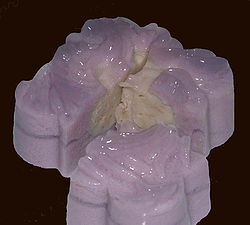 Over time, both the crusts and the composition of the fillings of mooncakes have diversified, in particular due to a commercial need to drive up sales in the face of intense competition between producers and from other food types. Part of these trends are also to cater to changing taste preferences, and because people are more health-conscious. Most of these contemporary styles were therefore especially prominent amongst the cosmopolitan and younger Chinese and amongst the overseas Chinese community, although traditional mooncakes are often sold alongside contemporary ones to cater to individual preferences.

Some of the earliest forms of diversification were by changing the fillings with ingredients considered unusual then. Taro paste (芋泥, yù ní), pineapple and durian were amongst the first to be introduced, especially amongst the overseas Chinese communities in Southeast Asia. The crust itself also evolved, particularly with the introduction of "snowskin mooncakes". Miniature mooncakes also appeared, in part to allow for easier individual consumption without the need to cut the large cakes.

To adapt to today's health-conscious lifestyle, fat-free mooncakes also appeared. Some are made of yogurt, jelly, and fat-free ice-cream. Even high-fibre low-sugar mooncakes have made their appearance. Customers pick and choose the size and filling of mooncakes that suits their taste and diet. For added hygiene, each cake is often wrapped in airtight plastic, accompanied by a tiny food preserver packet.

Contemporary-style mooncakes, while increasingly popular, have their detractors. Pricey ingredients have pushed up prices, causing worry of a "mooncake bubble" forming in China.[7] Food critics sometimes point out that "chocolate mooncakes" are in reality just chocolate shaped into mooncakes, and not mooncakes made of chocolate, while others complain that food chains appear intent on coming up with exotic flavours to take advantage of the market, without much thought for how well the tastes fuse together.[8] 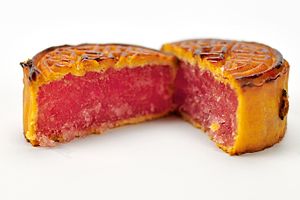 Fillings in contemporary style mooncakes has diversified to include just about anything which can be made into a paste. Mooncakes containing taro paste and pineapple, which were considered novelty items at their time of invention have in recent years become commonplace items. In addition, filling with ingredients such as coffee, chocolate, nuts (walnuts, mixed nuts, etc.), fruits (prunes, pineapples, melons, lychees, etc.), vegetables (sweet potatoes, etc.), and even ham have been added to give a modern twist to the traditional recipes. It is also increasingly popular to change the base of the paste to a custard-style.

Some other examples include

Some bakeries and restaurants have attempted to go up-market, often with excellent results. Gold-plated mooncakes were popular when they first appeared, and it is now possible to even find entire mooncakes made of pure gold. Traditional Chinese delicacies such as ginseng and bird's nest were soon followed by abalone and shark fin. Foreign food companies have also tried to cash in. Häagen-Dazs were one of the first to create an ice-cream mooncake, with a choice of either the "traditional," snow-skin, or Belgian white, milk, and dark chocolate crusts. Other ice-cream and restaurant chains soon followed up with their own versions. Other western ingredients, including champagne ganache, malt whisky, volcanic-salt caramel and even Black truffles, caviar and foie gras has made it into mooncakes. 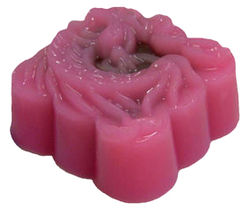 Snowy mooncakes first appeared on the market in the early 1980s. These non-baked, chilled mooncakes usually come with two types of crusts:

Use in other countries 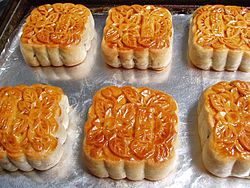 Vietnamese mooncakes fresh out of the oven. The Sino-Vietnamese characters on the cakes say "Nguyễn Family."

In Indonesia, there are hundreds of types of moon cakes, from the traditional to the modern mooncakes. The very traditional mooncake has been there ever since the Chinese and Japanese entered Indonesia, they are circular like a moon, white and rather thin. Fillings may include pork, chocolate, cheese, milk, durian, jackfruit and many other exotic fruits, however before 1998 it was only sold in small markets or villages. Now the traditional moon cake is easy to find in supermarkets and mini marts, rather than the modern mooncakes. The "modern" mooncakes finally entered Indonesia after 1998.

Mooncakes in Japan are known as geppei (月餅?), a direct translation of the Chinese name. They are associated with Chinese culture and are sold all year round, mainly in Japan's Chinatowns. Azuki (red bean) paste is the most popular filling for these mooncakes, but other sorts of beans as well as chestnut are also used. Unlike some types of Chinese mooncakes, mooncakes in Japan almost never contain an egg yolk in the center.

In Vietnam, mooncakes are known as bánh trung thu (literally "Mid-Autumn cake"). Unlike other countries, Vietnamese mooncakes always come in pairs. Each pair consists of a baked and a snowskin. The fillings may contain a variety such as savory roasted chicken, pork, shark fin, mung beans, coconut or durian. However, the traditional ones are made of lotus seeds, sugar coated winter melon, Chinese sausage, peanut and sesame seeds.

In the Philippines, while traditional moon cakes are available from local sources, Chinese-Filipinos have also created a variant called hopia (literally: "good cake"), and has a number of available fillings including hopiang munggo ("mung-bean hopia"), hopiang baboy ("pork hopia"), hopiang Hapon ("Japanese hopia", not related to moon cakes in Japan despite the name), and hopiang ube ("purple-yam paste hopia").

In Thailand, mooncakes (in Thai ขนมไหว้พระจันทร์) are sold in Thai-Chinese bakeries during festival season. In Bangkok, traditional and modern moon cakes are not limited to Chinatown-Yaowarat, but also are found in stalls of large supermarkets. Durian-filled mooncakes are ones of the most popular sold, especially with one or two salted egg yolk.