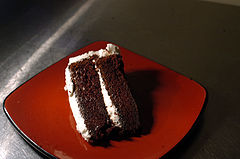 Devil's food cake is a moist, airy, rich chocolate layer cake. It is considered a counterpart to the white or yellow angel food cake. Due to differing recipes and changing ingredient availability over the course of the twentieth century, it is difficult to precisely qualify what distinguishes devil's food from the more standard chocolate cake. The cake is usually paired with a rich chocolate frosting.

Devil's food cake is generally more moist and airy than other chocolate cakes, and often uses cocoa as opposed to chocolate for the flavor as well as coffee.[1] The lack of melted chocolate and the addition of coffee is typically what distinguishes a 'devil's food cake' from a chocolate cake, though some recipes call for all, resulting in an even richer chocolate flavor. The use of hot, or boiling water as the cake's main liquid, rather than milk, is also a common difference.

A similar cake, the red velvet cake, is closely linked to a devil's food cake, and in some turn of the century cookbooks the two names may have been interchangeable. Most red velvet cakes today use red food coloring, but even without it, the reaction of acidic vinegar and buttermilk tends to better reveal the red anthocyanin in the cocoa. When used in cakes, acid causes reddening of cocoa powder when baked, and before more alkaline "Dutch Processed" cocoa was widely available, the red color would have been more pronounced. This natural tinting may have been the source for the name "Red Velvet" as well as "Devil's Food" and a long list of similar names for chocolate cakes.[3]