A mille-feuille pastry that has combed glazing

Traditionally, a mille-feuille is made up of three layers of puff pastry (pâte feuilletée), alternating with two layers of pastry cream (crème pâtissière), but sometimes whipped cream, or jam are substituted. The top is usually glazed with icing or fondant in alternating white (icing) and brown (chocolate) strips, and combed. Alternatively the top pastry layer may be dusted with confectioner's sugar, cocoa, or pulverized nuts (e.g. roasted almonds).

The exact origin of the mille-feuille is unknown. François Pierre La Varenne described a version in Le Cuisinier françois, 1651.[citation needed] It was later improved by Marie-Antoine Carême. Carême, writing in the early 19th century, considered it of "ancient origin."

Traditionally, a mille-feuille is made up of three layers of puff pastry, and two layers of crème pâtissière. The top is glazed with icing, in alternating white (icing) and brown (chocolate) strips, and then combed. Today, there are also savory mille-feuille, with cheese and spinach or other savory fillings. 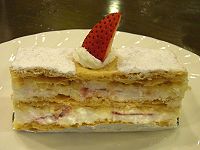 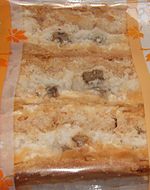 According to La Varenne, it was earlier called gâteau de mille-feuilles (English: cake of a thousand sheets), referring to the many layers of pastry. Using traditional puff pastry, made with six folds of three layers, it has 729 layers; with some modern recipes it may have as many as 2,048.[2]

The variant name of Napoleon appears to come from napolitain, the French adjective for the Italian city of Naples, but altered by association with the name of Emperor Napoleon I of France. The Larousse Gastronomique does not mention the Napoléon, although a gateau napolitain is listed, with a note that while the cake itself is not often seen, small biscuits known as fonds napolitains are still made, decorated with butter cream or conserves.[3] There is no evidence to connect the pastry to the emperor himself. In France, a Napoléon is a mille-feuille filled with almond flavoured paste.

In Australia, it is called a "vanilla slice" or "custard slice" and is filled with vanilla custard. It usually has only a top and bottom pastry layer. The sweet is often dusted with icing sugar, or topped with a plain or passionfruit flavoured icing. The filling is often flavoured with chocolate.

In Italy, it is called mille foglie and contains similar fillings. A savory Italian version consists of puff pastry filled with spinach, cheese or pesto, among other things. Another important distinction of the Italian variety is that it often consists of a layer of puff pastry with layers of sponge cake as well (e.g. from bottom to top, puff pastry, sponge cake strawberries and cream and then puff pastry).

In New Zealand, it is usually called a ‘custard square.’

In the United Kingdom, the cake is most often called a "vanilla slice" or a "cream slice", but can, on occasion, be named "mille-feuille" or "Napoleon" on branded products.

In Canada, mille-feuille is more commonly named 'gâteaux Napoléon,' or 'Napoleon Slice,' (in English Canada) due to the country's long French history. It is sold either with custard, whipped cream, or both, between three layers of puff pastry. Almond paste is the most common flavoured variety. There is a French Canadian way where the mille-feuille is done with graham crackers instead of puff pastry, and where pudding replaces the custard layer.

In South Africa and Zimbabwe, it is called a "custard slice".

In Sweden as well as in Finland, the Napoleonbakelse (Napoleon pastry) is a mille-feuille filled with whipped cream, custard, and jam. The top of the pastry is glazed with icing and currant jelly. In Denmark and Norway, it is simply called Napoleon-cake.[4]

In Belgium and the Netherlands, the tompouce or tompoes is the equivalent pastry. Several variations exist in Belgium, but in the Netherlands, it is iconic and the market allows preciously little variation in form, size, ingredients and colour.

In the Spanish milhojas, the puff pastry is thin and crunchy and the filling is only crème fraîche. They are often far deeper than solely of three layers of the pastry, and reach up to .5 feet (0.15 m) tall.

In Hong Kong, the 拿破侖 (Napoleon pastry) is layered with buttercream, chiffon cake and, occasionally, walnuts.

In Iran, the pastry is called "نون ناپلئوني" (Nûn Nâpeloni, literally "Napoleonic Bread") after Napoleon Bonaparte. It consists of thin puff pastry with only crème fraîche filling and often topped with powdered sugar.

In Argentina milhojas, various layers of puff pastry are layered with dulce de leche and confectioner sugar on top.

In Poland, the pastry is called a "kremówka", or "napoleonka", after Napoleon Bonaparte. They consist of layers of pastry, between which is thick cream. The whole pastry is then covered with powdered sugar.

In Greece, the pastry is called "Μιλφέιγ", which is the transcription of the word mille-feuille using Greek letters. The filling between the layers is cream whereas Chantilly cream is used at the top of the pastry.

An annual competition for the best vanilla slice baker is the Great Australian Vanilla Slice Triumph held in Ouyen in western Victoria. Judging criteria include "when tasted, should reveal a custard with a creamy smooth texture and a balance of vanilla taste with a crisp, crunchy pastry topped with a smooth and shiny glaze/fondant".[5]