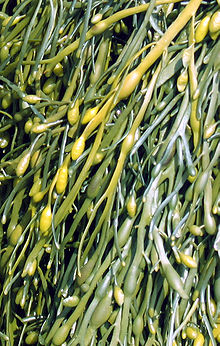 Ascophyllum nodosum exposed to the sun in Nova Scotia, Canada 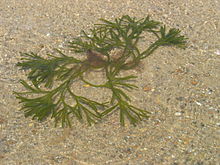 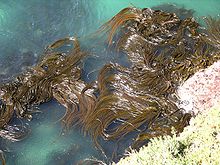 The top of a kelp forest in Otago, New Zealand

Seaweed is a loose, colloquial term encompassing macroscopic, multicellular, benthic marine algae.[1] The term includes some members of the red, brown and green algae. Seaweeds can also be classified by use (as food, medicine, fertilizer, industrial, etc.).

A seaweed is in the kingdom Algaeil and may belong to one of several groups of multicellular algae: the red algae, green algae, and brown algae. As these three groups are not thought to have a common multicellular ancestor, the seaweeds are a polyphyletic group. In addition, some tuft-forming bluegreen algae (Cyanobacteria) are sometimes considered as seaweeds — "seaweed" is a colloquial term and lacks a formal definition.

The stipe and blade are collectively known as the frond.

Two specific environmental requirements dominate seaweed ecology. These are the presence of seawater (or at least brackish water) and the presence of light sufficient to drive photosynthesis. Another common requirement is a firm attachment point. As a result, seaweeds most commonly inhabit the littoral zone and within that zone more frequently on rocky shores than on sand or shingle. Seaweeds occupy a wide range of ecological niches. The highest elevation is only wetted by the tops of sea spray, the lowest is several meters deep. In some areas, littoral seaweeds can extend several miles out to sea. The limiting factor in such cases is sunlight availability. The deepest living seaweeds are some species of red algae.

A number of species such as Sargassum have adapted to a fully planktonic niche and are free-floating, depending on gas-filled sacs to maintain an acceptable depth.

Others have adapted to live in tidal rock pools. In this habitat seaweeds must withstand rapidly changing temperature and salinity and even occasional drying.[2] 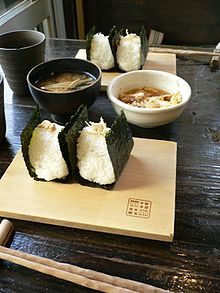 Small plots being used to farm seaweed in Indonesia, with each rectangle belonging to a different family

Seaweed has a variety of purposes, for which it is farmed[3] or foraged from the wild.[4]

At the beginning of 2011, Indonesia produced 3 millions tonnes of seaweed and surpassed Philippines as the world's largest seaweed producer. By 2012 the production will hit 10 million tonnes.[5]

In Asia, Nori（海苔）(in Japan), Zicai (紫菜) (in China), and Gim (김) (in Korea) are sheets of dried Porphyra used in soups or to wrap sushi. Chondrus crispus (commonly known as Irish Moss or carrageenan moss) is another red alga used in producing various food additives, along with Kappaphycus and various gigartinoid seaweeds. Porphyra is a red alga used in Wales to make laver. Laverbread, made from oats and the laver, is a popular dish there. Affectionately called "Dulce" in northern Belize, seaweeds are mixed with milk, nutmeg, cinnamon, and vanilla to make a common beverage.

Seaweeds are also harvested or cultivated for the extraction of alginate, agar and carrageenan, gelatinous substances collectively known as hydrocolloids or phycocolloids. Hydrocolloids have attained commercial significance as food additives.[7] The food industry exploits their gelling, water-retention, emulsifying and other physical properties. Agar is used in foods such as confectionery, meat and poultry products, desserts and beverages and moulded foods. Carrageenan is used in salad dressings and sauces, dietetic foods, and as a preservative in meat and fish products, dairy items and baked goods. 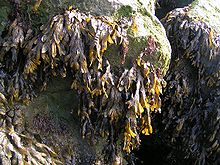 Seaweed-covered rocks in the United Kingdom 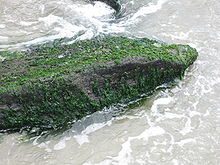 Alginates are used in wound dressings, and production of dental moulds. In microbiology research, agar is extensively used as culture medium.[citation needed]

Seaweed is a source of iodine,[8] necessary for thyroid function and to prevent goitre.

Seaweeds may have curative properties for tuberculosis, arthritis, colds and influenza, worm infestations and even tumors.[9][dubious – discuss]

Seaweed extract is used in some diet pills.[10][11][12] Other seaweed pills exploit the same effect as gastric banding, expanding in the stomach to make the body feel more full.[13][14]

Other seaweeds may be used as fertilizer.[citation needed] Seaweed is currently under consideration as a potential source of bioethanol.[15][16] Seaweed is an ingredient in toothpaste, cosmetics and paints.[3]

Alginates enjoy many of the same uses as carrageenan, and are used in industrial products such as paper coatings, adhesives, dyes, gels, explosives and in processes such as paper sizing, textile printing, hydro-mulching and drilling.

The high iodine content of seaweed can produce iodine toxicity if large amounts of seaweed are consumed.

Rotting seaweed is a potent source of hydrogen sulfide, a highly toxic gas, and has been implicated in some incidents of apparent hydrogen-sulfide poisoning.[17] It can cause vomiting and diarrhea. 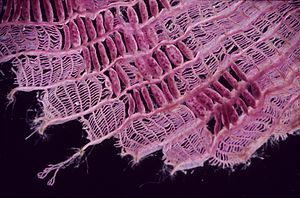 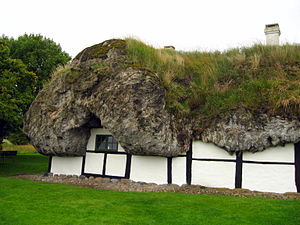