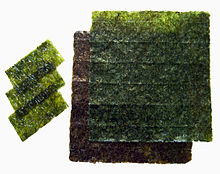 Roasted sheets of nori are used to wrap sushi. 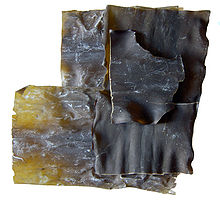 Edible seaweed are algae that can be eaten or used in the preparation of food. They may belong to one of several groups of multicellular algae: the red algae, green algae, and brown algae. Seaweeds are used extensively as food in coastal cuisines around the world. Seaweed has been a part of diets in China, Japan, and Korea since prehistoric times.[1] Seaweed is also consumed in many traditional European societies, especially in northern and western Ireland, Wales (see Laver in the list below), Iceland and western Norway. Seaweed is also eaten in some coastal parts of South West England[2] and the Atlantic coast of France as well as Nova Scotia and Newfoundland. The Māori people of New Zealand traditionally used a few species of red and green seaweed.[3] Most edible seaweeds are marine algae as most freshwater algae are toxic. While marine algae are not toxic, some do contain acids that irritate the digestion canal, while some others can have a laxative and electrolyte balancing effect.[4] Japan consumes no fewer than 7 types of seaweed identified by name, and the general term for seaweed is used primarily for science and not in menus. Seaweed contains high levels of iodine relative to other foods.[5] In the Philippines, Tiwi, Albay residents discovered a new pancit or noodles made from seaweed, which can be cooked into pancit canton, pancit luglug, spaghetti or carbonara and is claimed to have health benefits such as being rich in calcium, magnesium and iodine.[6]

In some parts of Asia, nori 海苔 (in Japan), zicai 紫菜 (in China), and gim 김 (in Korea) are sheets of the dried red alga Porphyra and are used in soups or to wrap sushi or onigiri. Chondrus crispus (commonly known as Irish moss) is another red alga used in producing various food additives, along with Kappaphycus and various gigartinoid seaweeds.

Seaweeds are also harvested or cultivated for the extraction of alginate, agar and carrageenan, gelatinous substances collectively known as hydrocolloids or phycocolloids. Hydrocolloids have attained commercial significance, especially in food production as food additives.[7] The food industry exploits the gelling, water-retention, emulsifying and other physical properties of these hydrocolloids.

Polysaccharides in seaweed may be metabolized in humans through the action of bacterial gut enzymes. Research has failed to find such enzymes in North-American population, while being frequent in Japanese population.[8]