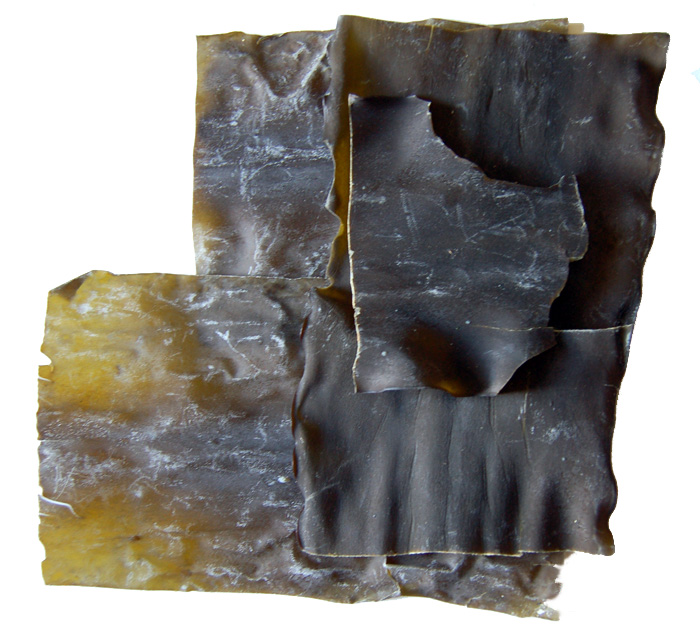 Over 90 percent of Japanese kombu is cultivated, and most is harvested, in . It is cultivated as far south as the .

The earliest written record of kombu appeared in in as a gift and tax from the . Its actual use is believed to be much earlier, most likely dating back to the period, but as it easily decomposes, no archaeological evidence can be found. During the , a newly developed drying technique allowed kombu to be stored for more than a few days and kombu became an important export from the Tohoku area Fact|date=March 2008. By the , as Hokkaidō was colonized and shipment routes were organized, the use of kombu became widespread throughout Japan. Traditional n cuisine relies heavily on kombu as a part of the diet; this practice began in the Edo period. In Okinawa, the consumption of kombu per household is the highest of all prefectures. In the 20th century, a way to cultivate kombu was discovered and kombu became cheap and readily available everywhere.

In 1867 the word "kombu" first appeared in an English-language publication - "A Japanese and English Dictionary," by James C. Hepburn.

Starting in the 1960s, the word "kombu" started to be used widely in the United States, and the product (imported in dried form from Japan) became widely avaialable at natural food stores and Asian-American grocery stores, due to the influence of the macrobiotic movement, and in the 1970s with the growing number of Japanese restaurants and sushi bars.

Kombu is used extensively in s as one of the three main ingredients needed to make , a soup stock. Kombu is usually sold dried or in a dried shred called "Oboro kombu". It may also be eaten fresh as . Making kombu dashi is simple though kombu dashi powder may also be used. A strip of dried kombu in cold water is brought to a boil as the very first step of making dashi and the softened kombu is commonly eaten after cooking. It can also be sliced and used to make "", a dish that is simmered in soy sauce and mirin.

It is also important in and .

Kombu may be pickled with sweet and sour flavoring and are cut into small strips 5 or 6 centimeters long and 2 centimeters wide. These are often eaten as a snack with .

It is often included when cooking beans, putatively to add nutrients and improve their digestibility.

Kombu naturally contains , an amino acid responsible for , a Japanese word for one of the proposed five basic tastes.

Glutamic acid is often used as a food additive and flavour enhancer in the form of (MSG), a sodium salt.