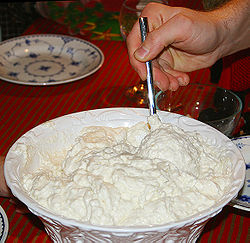 "Ris a la mande" being served during the traditional Scandinavian Christmas meal, in Denmark

Rice pudding is a dish made from rice mixed with water or milk and sometimes other ingredients such as cinnamon and raisins. Different variants are used for either desserts or dinners. When used as a dessert, it is commonly combined with a sweetener such as sugar.

Rice pudding around the world 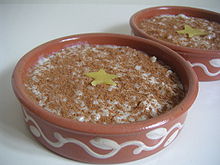 Arroz con leche (Rice with milk) is the Spanish type of rice pudding.

Rice puddings are found in nearly every area of the world. Recipes can greatly vary even within a single country. The dessert can be boiled or baked.[1] Different types of pudding vary depending on preparation methods and the ingredients selected. The following ingredients are regularly found in rice puddings.

The following is a short list of various rice puddings from different places.

Technically, many types of rice-based dishes resembling rice pudding could be found in various countries in Southeast Asia, many of which have Chinese influences. Owing to Chinese usage, they are almost never referred to as rice pudding by the local populations (whether ethnic Chinese origin or not) but instead called sweet rice porridge. The term pudding in various modern East Asian languages denotes a cornstarch or gelatin-based jelly-like set dessert, such as mango pudding. 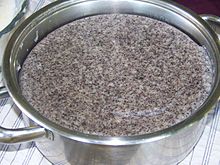 Audio (help·info) is a typical rice pudding with black poppy seeds for the region of Kocani, Republic of Macedonia. 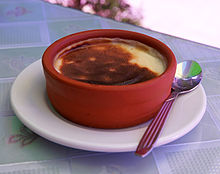 In the Nordic countries, rice porridge is a common breakfast, and sometimes dinner. It is made as a warm dish from rice cooked in milk. When served, it is commonly sprinkled with cinnamon and sugar and served with milk. In Iceland, it is sometimes served with cold slátur (English: Slaughter, a type of blood sausage, see þorramatur). In different languages it is called risengrød (Danish, eaten at winter for dinner), risengrynsgrøt (Norwegian), risgrynsgröt (Swedish), riisipuuro (Finnish), Grjónagrautur (Icelandic), hrísgrjónagrautur (Icelandic), and rísgreytur (Faroese).

The rice porridge dinner is used as a basis for rice cream dessert. There are many different variants of this dessert but the basis is the same. Cold rice porridge (the dinner variant) is mixed with whipped cream and something sweet. In Sweden, it is sometimes mixed with oranges and is then called apelsinris. Ris á l'amande (Danish, after French: Riz à l'amande, rice with almonds) is cold risengrød with whipped cream, vanilla, and chopped almonds, often served with hot or chilled cherry (or strawberry) sauce. In Norway, the dessert is called riskrem and sometimes served with red sauce (usually made from strawberries or raspberries). Rice cream dessert is called ris à la Malta in Sweden, while what is referred to as risgrynspudding is made with eggs instead of cream.

In Scandinavia, rice pudding has long Christmas traditions. It sometimes goes by the names julegröt/julegrøt/julegrød (Yule porridge), or tomtegröt/nissegrød (see tomte). The latter name is due to the old tradition of sharing the meal with the guardian of the homestead, called tomte or nisse (see also blót).

A particular Christmas tradition that is often associated with eating rice pudding or porridge is hiding a whole almond in the porridge. Not everyone does that. In Sweden and Finland, popular belief has it that the one who eats the almond will be in luck the following year. In Norway, Denmark, Iceland and the Faroe Islands, the one who finds it will get the almond present as a prize. In Denmark, Norway and the Faroe Islands, the almond tradition is usually done with Ris a la mande served as dessert at Julefrokost (Christmas lunch) or on Christmas Eve. In Sweden and Finland, it is more commonly done with a rice porridge dinner, sometimes a few days before Christmas Eve, but the tradition is not followed by everybody.

In the United Kingdom, rice pudding is a traditional dessert and is very popular. The earliest rice pudding recipes were called whitepot and date from the Tudor period; one of the earliest recipes was written down by Gervase Markham in 1615.[5] Rice pudding is traditionally made with pudding rice, milk, cream, and sugar and is often, but not always, flavoured with vanilla, nutmeg, jam and/or cinnamon. It can be made in two ways: in a saucepan or by baking in the oven.

In a saucepan, it is made by gently simmering the milk and rice until tender, and then the sugar is carefully mixed in. Finally, the cream is mixed in, and it can either be left to cool and be served at room temperature, or it can be heated and served hot. It should have a very creamy consistency.

When made in the oven, the pudding rice is placed into a baking dish, and the milk, cream and sugar are mixed in. The dish is then placed in the oven and baked at a low temperature for a few hours, until the rice is tender and the pudding has a creamy consistency. Whilst cooking, the pudding may develop a thick crust, which adds an interesting texture to the pudding.

An alternative recipe, frequently used in the North of England, uses butter instead of cream, adds a small pinch of salt, and requires the pudding mixture to stand for an hour or so prior to being cooked. Such puddings tend to set firmly when cooled, enabling slices to be cut and eaten like cake. If eaten hot, the pudding was traditionally served with cream poured on top in wealthy households, and with full fat milk where cream was not available. A spoonful of sweet jam or conserve is also a very popular topping for the pudding.

A specific type of rice is available and widely used for Rice Pudding called 'Pudding Rice'. The grain is round and short, and when cooked produces a creamier consistency than savoury rice. However, short gained rice such as risotto rice can be used as a substitute.

Ready-made rice pudding, which is pre-cooked and ready to eat, is sold in tin cans or pots and is very widely available in most supermarkets and shops. Because it is canned, it has a very long shelf life.

Canada and the United States

In Canada and the United States, most recipes have descended from European immigrants. In the latter half of the twentieth century, Asian, Middle Eastern and Latin American recipes have become more common. In the New England region of the United States, the most popular pudding is made with long grain rice, milk, sugar, or in Vermont, maple syrup. This may be combined with nutmeg, cinnamon, and/or raisins. The pudding is usually partially cooked on top of the stove in a double boiler, and then "finished" in an oven.

Rice pudding is mentioned frequently in literature of the Victorian and Edwardian eras, typically in the context of a cheap, plain, familiar food, often served to children or invalids, and often rendered boring by too-frequent inclusion in menus.

In Edward Bulwer-Lytton's Kenelm Chillingly, a would-be host reassures a prospective guest: "Don't fear that you shall have only mutton-chops and a rice-pudding...". In Henry James' A Passionate Pilgrim, the narrator laments: "having dreamed of lamb and spinach and a salade de saison, I sat down in penitence to a mutton-chop and a rice pudding."

Charles Dickens relates an incident of shabby treatment in A Schoolboy's Story: "it was imposing on Old Cheeseman to give him nothing but boiled mutton through a whole Vacation, but that was just like the system. When they didn't give him boiled mutton, they gave him rice pudding, pretending it was a treat. And saved the butcher."

In Ethel Turner's Seven Little Australians, the children express dissatisfaction with their food. "My father and Esther... are having roast fowl, three vegetables, and four kinds of pudding", Pip says angrily. "It isn't fair!" His sister notes that "we had dinner at one o'clock." "Boiled mutton and carrots and rice pudding!" her brother replies, witheringly.

T.S. Eliot, in the poem "Bustopher Jones: The Cat About Town," writes: "If he looks full of gloom/Then he's lunched at The Tomb/On cabbage, rice pudding, and mutton."

Rice pudding is mentioned with much more affection in an incident related by Walt Whitman in Specimen Days. Whitman visited an invalid soldier who "was very sick, with no appetite... he confess'd that he had a hankering for a good home-made rice pudding—thought he could relish it better than anything... I soon procured B. his rice pudding. A Washington lady, (Mrs. O'C.), hearing his wish, made the pudding herself, and I took it up to him the next day. He subsequently told me he lived upon it for three or four days."

In the play Arcadia by Tom Stoppard, Thomasina Coverly uses the example of stirring jam into rice pudding as an illustration of chaos. She wonders why it isn't possible to separate the jam from the pudding by stirring backwards. Her tutor Septimus Hodge asserts that it is because our universe is deterministic, according to the theories of Isaac Newton.

In The Hitchhiker's Guide to the Galaxy by Douglas Adams the supercomputer Deep Thought derives the existence of rice pudding from first principles. This is to counterpoint between the complexity of Deep Thought and its task of exploring the eternal verities, with simplicity of the pudding.

In Dutch and Flemish Christian folklore it is believed that rice porridge is the meal given to people who go to heaven, and it is eaten out of a bowl with a golden spoon.[citation needed]