Egg yolk
Not to be confused with yoke. 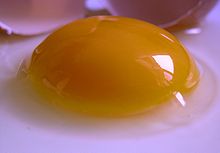 An egg yolk is a part of an egg which feeds the developing embryo. The egg yolk is suspended in the egg white (known alternatively as albumen or glair/glaire) by one or two spiral bands of tissue called the chalazae. Prior to fertilization, the yolk together with the germinal disc is a single cell, one of the few single cells that can be seen by the naked eye.

As a food, yolks are a major source of vitamins and minerals. They contain all of the egg's fat and cholesterol, and about one-fifth of the protein. If left intact while cooking fried eggs, the yellow yolk surrounded by a flat blob of whites creates the distinctive sunny-side up form of the food. Mixing the two components together before frying results in the pale yellow form found in omelettes and scrambled eggs.

The yolk makes up about 33% of the liquid weight of the egg; it contains approximately 60 calories, three times the caloric content of the egg white.

All of the fat-soluble vitamins (A, D, E, and K) are found in the egg yolk. Egg yolk is one of the few foods naturally containing vitamin D.

The composition (by weight) of the most prevalent fatty acids in egg yolk is typically as follows:[1]

Egg yolk is a source of lecithin.

The yellow color is due to lutein and zeaxanthin, which are yellow or orange carotenoids known as xanthophylls.

The different yolk proteins have distinct roles. Phosvitins are important in sequestering calcium, iron and other cations for the developing embryo. Phosvitins are one of the most phosphorylated (10%) proteins in nature, the high concentration of phosphate groups providing efficient metal-binding sites in clusters.[2][3] Lipovitellins are involved in lipid and metal storage, and contain a heterogeneous mixture of about 16% (w/w) noncovalently bound lipid, most being phospholipid. Lipovitellin-1 contains two chains, LV1N and LV1C.[4][5]

Double-yolk eggs occur when ovulation occurs too rapidly, or when one yolk becomes joined with another yolk. These eggs may be the result of a young hen's reproductive cycle not yet being synchronized.[6] Some hybrid breeds of hens also produce double yolk eggs by default. Such eggs are produced in West Bengal, India and in particular by Arambagh Hatcheries in Arambagh.

Some hens will rarely lay double-yolked eggs as the result of unsynchronized production cycles. Although heredity causes some hens to have a higher propensity to lay double-yolked eggs, these occur more frequently as occasional abnormalities in young hens beginning to lay.[citation needed] Usually a double-yolked egg will be longer and thinner than an ordinary single-yolk egg. Double-yolked eggs usually only lead to observed successful hatchlings under human intervention, as the chickens interfere with each other's hatching process and die.[7]

Eggs without yolk are called "dwarf" or "wind" eggs.[8] Such an egg is most often a pullet's first effort, produced before her laying mechanism is fully ready. In a mature hen, a wind egg is unlikely, but can occur if a bit of reproductive tissue breaks away, stimulating the egg producing glands to treat it like a yolk and wrap it in albumen, membranes and a shell as it travels through the egg tube. This has occurred if, instead of a yolk, the egg contains a small particle of grayish tissue. An archaic term for a no yolk egg is a "cock" egg.[9] Since they contained no yolk and therefore can't hatch, it was traditionally believed that these eggs were laid by roosters.[citation needed] This type of egg occurs in many varieties of fowl. They have been found in chickens, both standard and bantams, guineas and coturnix quail. See Cock egg.