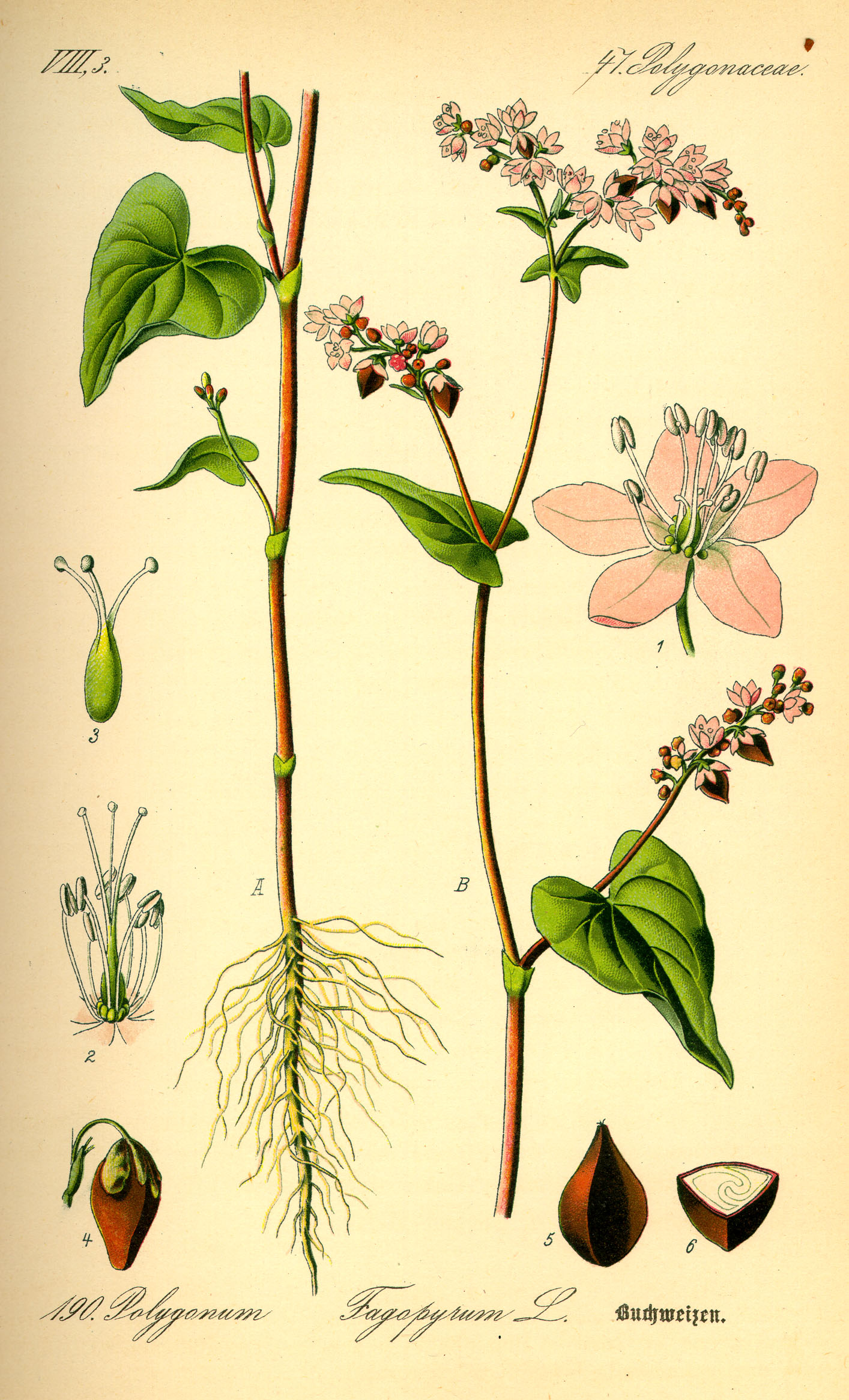 Buckwheat refers to plants in two genera of the family : the Eurasian genus "", and the North American genus "". The crop plant, common buckwheat, is "Fagopyrum esculentum". Tartary buckwheat ("F. tataricum" Gaertn.) or "bitter buckwheat" is also used as a crop, but it is much less common. Despite the common name and the grain-like use of the crop, buckwheats are not grasses (and are therefore considered s) and are not related to nor other s. The agricultural weed known as ("Fallopia convolvulus") is in the same family, but not closely related to the crop species.Within "Fagopyrum", the cultivated species are in the cymosum group, with "F. cymosum" L. (perennial buckwheat), "F. giganteum" and "F. homotropicum". [cite journal|author=T. Sharma, S. Jana|year=2002|title=Species relationships in "Fagopyrum" revealed by PCR-based DNA fingerprinting|journal= Theoretical and Applied Genetics
doi=10.1007/s00122-002-0938-9|volume=105|pages=306–312] The wild ancestor of common buckwheat is "F. esculentum" ssp."ancestrale". "F. homotropicum" is interfertile with "F. esculentum" and the wild forms have a common distribution, in . The wild ancestor of tartary buckwheat is "F. tataricum" ssp. "potanini". [cite journal|author=Ohnishi, O., Matsuoka, Y.|year=1996|title=Search for the wild ancestor of buckwheat II. Taxonomy of "Fagopyrum" (Polygonaceae) species based on morphology, isozymes and cpDNA variability|journal= Genes and Genetic Systems|volume=71|pages=383–390 | doi = 10.1266/ggs.71.383]

The name "buckwheat" or "beech wheat" comes from its triangular seeds, which resemble the much larger seeds of the beech nut from the beech tree, and the fact that it is used like wheat. The etymology of the word is explained as partial translation of Middle Dutch boecweite : boek, beech; see PIE bhago- + weite, wheat.

Common buckwheat was domesticated and first cultivated in , possibly around 6000 BC, and from there spread to Europe and to and . Domestication most likely took place in the western Yunnan region of China. [cite journal
author=Ohnishi, O
year=1998
title=Search for the wild ancestor of buckwheat III. The wild ancestor of cultivated common buckwheat, and of tatary buckwheat
journal=Economic Botany
volume=52
pages=123–133] Buckwheat is documented in Europe in the Balkans by at least the (circa 4000 BC) and the oldest known remains in China so far date to circa 2600 BC, and buckwheat pollen has been found in Japan from as early as 4000 BC. It is the world's highest elevation domesticate, being cultivated in on the edge of the or on the Plateau itself. Buckwheat was one of the earliest crops introduced by Europeans to North America. Dispersal around the globe was complete by 2006, when a variety developed in Canada was widely planted in China.

Buckwheat is a short season crop that does well on low-fertility or acidic soils, but the soil must be well drained. Too much fertilizer, especially nitrogen, will reduce yields. In hot climates, it can only be grown by sowing late in the season, so that it will bloom in cooler weather. The presence of s greatly increases the yield. The nectar from buckwheat flower makes a dark colored honey. Buckwheat is sometimes used as a , as a plant for control, or as wildlife cover and feed.

In the northeastern United States, buckwheat was a common crop in the 18th and 19th centuries. Cultivation declined sharply in the 20th century due the use of nitrogen fertilizer, to which maize and wheat respond strongly. Over a million acres (4,000 km²) were harvested in the United States in 1918. By 1954 that had declined to 150,000 acres (600 km²), and by 1964, the last year that production statistics were gathered, only 50,000 acres (200 km²) were grown.

The fruit is an , similar to seed, with a single seed inside a hard outer hull. The starchy endosperm is white and makes up most or all of buckwheat flour. The seed coat is green or tan, which darkens buckwheat flour. The hull is dark brown or black, and some may be included in buckwheat flour as dark specks. The dark flour is known (exaggeratedly) as "blé noir" ("black wheat") in French, along with the name "sarrazin" ("saracen").

Buckwheat s play a major role in the cuisines of (),

Buckwheat are commonly used in western and eastern . The porridge was common, and is often considered the definitive peasant dish. It is made from roasted groats that are cooked with broth to a texture similar to rice or . The dish was brought to America by Russian and Polish immigrants who called it "" and used it mixed with pasta or as a filling for es and es, and hence buckwheat groats are most commonly called "kasha" in America. Groats were the most widely used form of buckwheat worldwide during the 20th century, with consumption primarily in Russia, Ukraine and Poland.

Buckwheat , sometimes raised with , are eaten in several countries. They are known as buckwheat blinis in , s in (savoury crêpes which are especially associated with ), s in and "boûketes" (that is, named the same as the plant they are made of) in . Similar pancakes were a common food in American pioneer days. They are light and foamy. The buckwheat flour gives them an earthy, mildly mushroom-like taste. In Ukraine, yeast rolls called "hrechanyky" are made from buckwheat.

made from groats are used for breakfast food, , and thickening materials in s, gravies, and dressings. In , buckwheat is used to make a jelly called . It is also used with , or in and products.

Buckwheat contains no , and can thus be eaten by people with or gluten allergies. Many bread-like preparations have been developed.

Besides the seeds, from which buckwheat flour is produced, buckwheat is also a good plant, producing a dark, strong .

Buckwheat greens can be eaten. However, if consumed in sufficient quantities, the greens, or, more commonly, their juice, can induce sensitization of the skin to sunlight known as fagopyrism. [cite web
title=Are Buckwheat Greens Toxic?
author=Gilles Arbour
url=http://www.gillesarbour.com/buckwheat_assets/Buckwheat%20Greens.pdf
month=December | year=2004
work=Townsend Letter for Doctors &amp; Patients
accessdate = 2004-06-15
format=PDF] Fair skinned people are particularly susceptible, as are light pigmented livestock. Enthusiasts of , however, eat the very young buckwheat (four to five days of growth) for their subtle, nutty flavour and high nutritional value. They are widely available in Japan.

A buckwheat protein has been found to bind cholesterol tightly. It is being studied for reducing plasma cholesterol in people with an excess of this compound. [cite journal|author=H. Tomotake, I. Shimaoka, J. Kayashita, F. Yokoyama, M. Nakajoh and N. Kato.|year=2001|title=Stronger suppression of plasma cholesterol and enhancement of the fecal excretion of steroids by a buckwheat protein product than by a soy protein isolate in rats fed on a cholesterol-free diet.|journal= Bioscience Biotechnology and Biochemistry|volume=65|pages=1412–1414 | doi = 10.1271/bbb.65.1412]

Buckwheat hulls are used as filling for a variety of upholstered goods, including s and . The hulls are durable and do not conduct or reflect heat as much as synthetic fills. They are sometimes marketed as an alternative natural fill to feathers for those with allergies.

In recent years, buckwheat has been used as a substitute for other grain in . Buckwheat is used in the same way as to produce a that can form the basis of a mash that will brew a without or (together ) and therefore can be suitable for or others sensitive to certain . [cite web
author=Carolyn Smagalski
year = 2006
url = http://www.glutenfreebeerfestival.com
title = Gluten Free Beer Festival]

The buckwheat plant is celebrated in at their [http://www.buckwheatfest.com/map_wv.html Buckwheat Festival] where people can participate in swine, cow, and sheep judging contests, vegetable contests, and craft fairs. The area fire departments also play an important role in the series of parades that occur there. Each year there is a King and Lady Fireman elected. Also there are many rides and homemade, homegrown buckwheat cakes and sausage.

In Hinduism, people eat items made of buckwheat flour in the fasting days. There are many great recipes available varying all over India. People in Rajasthan and Maharashtra call this KUTTU KA ATTA.

Buckwheat is also a common ingredient in many raw food dishes. It is easily sprouted and can be dehydrated for later or sprinkled on salads and other dishes.