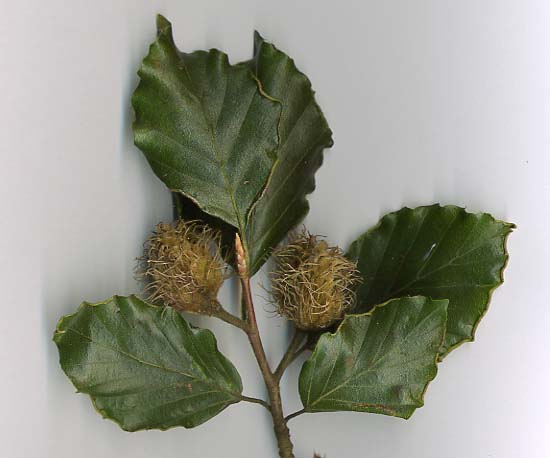 Beech ("Fagus") is a genus of ten of s in the family , native to temperate and .

The leaves of beech trees are entire or sparsely toothed, from 5&ndash;15 cm long and 4&ndash;10 cm broad. The s are small single-sex (), the female flowers borne in pairs, the male flowers wind-pollinated s, produced in spring shortly after the new leaves appear. The bark is smooth and light gray. The is a small, sharply three&ndash;angled nut 10&ndash;15 mm long, borne singly or in pairs in soft-spined husks 1.5&ndash;2.5 cm long, known as cupules. The nuts are edible, though bitter (though not nearly as bitter as acorns) with a high content, and are called beechmast.

Beech grows on a wide range of soil types, acid or basic, provided they are not waterlogged. The tree canopy casts dense shade, and carpets the ground with dense leaf litter, and the ground flora beneath may be sparse.

The southern beeches "" previously thought closely related to beeches, are now treated as members of a separate family, Nothofagaceae. They are found in , , , and .

The ("Grylloprociphilus imbricator") is a common pest of beech trees. Beeches are also used as food plants by some species of (see ).

The beech most commonly grown as an ornamental tree is the ("Fagus sylvatica"), widely cultivated in North America as well as its native Europe. Many varieties are in cultivation, notably the weeping beech "F. sylvatica" 'Pendula', several varieties of Copper or purple beech, the fern-leaved beech "F. sylvatica" 'Asplenifolia', and the tricolour beech "F. sylvatica" 'roseomarginata'. The strikingly columnar Dawyck beech ("F. sylvatica" 'Dawyck') occurs in green, gold and purple forms, named after Dawyck Garden in the Scottish Borders, one of the four garden sites of the .

The European species, "Fagus sylvatica", yields a utility timber that is tough but dimensionally unstable. It is widely used for furniture framing and carcass construction, flooring and engineering purposes, in plywood and in household items like plates, but rarely as a decorative timber.

Beech wood is an excellent , easily split and burning for many hours with bright but calm flames. Chips of beech wood are used in the brewing of Budweiser as a fining agent. Beech logs are burned to dry the s used in some German smoked beers, to give the beers their typical flavor. Beech is also used to smoke some cheeses.

Beech wood is excellent for furnitures as well. Some drums are made from beech, which has a tone generally considered to be between and , the two most popular drum woods.

Also, beech pulp is used as the basis for manufacturing a textile fibre known as Modal.

The fruit of the beech, also called "Beechnuts", are found in the small burrs that drop from tree in Autumn. They are small and triangular, are edible, have a sweet taste and are highly nutritious. (~ 20% protein and also ~ 20% oil content). However, they do contain organic substances which are slightly toxic (it has been reported that eating approx. 50 nuts may make you ill) so that they should not be eaten in larger quantities.Fact|date=October 2007 The oil pressed from them does not have this effect any more. It was in common use in Europe in times of abundant labor but scarce food sources, such as in Germany in the years immediately after ; people would go into the woods and collect beechnuts, then swap them for oil at small private or community-owned oil mills; the mill would keep and sell a certain percentage to cover its operating costs. As collecting beechnuts is time-consuming work, use of the oil dropped sharply when mass-produced oils became more available again.

Beech was a late entrant to after the last glaciation, and may have been restricted to basic soils in the south of England [http://linnaeus.nrm.se/flora/di/faga/fagus/fagusylv.jpg] . The beech is classified as a native in the south of England and as a non-native in the north where it is often removed from 'native' woods [ [http://www.forestry.gov.uk/newsrele.nsf/WebPressReleases/1A301105A92950FE80257012002508A0 Forestry Commission] ] .

Beech is not native to Ireland, however it was widely planted from the 18th Century, and can become a problem shading out the native woodland understory. The say that the best policy is to remove young, naturally regenerating beech while retaining veteran specimens with biodiversity value [ [http://friendsoftheirishenvironment.net/fnn/index.php?action=view&id=109 Friends of the Irish Environment] ] .

Climate change is having a negative impact on the beech in the south of England [ [http://www.cityoflondon.gov.uk/Corporation/media_centre/files2006/182_06.htm City of London] ] . This has led to a campaign by Friends of the Rusland Beeches [ [http://www.woodland-trust.org.uk/ancient-tree-forum/atfgallery/featuresstories/marianne/marianne.htm Friends of the Rusland Beeches] ] and South Lakeland Friends of the Earth [ [http://www.foe.co.uk/app/localgroups?action=display&groupid=11512 South Lakeland Friends of the Earth] ] launched in 2007 to reclassify the beech as native in Cumbria [http://www.nwemail.co.uk/news/viewarticle.aspx?id=596732] . The campaign is backed by MP who tabled a motion on 3rd December 2007 regarding the status of beech in Cumbria [ [http://edmi.parliament.uk/EDMi/EDMDetails.aspx?EDMID=34582&SESSION=891 UK Parliament - Early Day Motions By Details ] ] .

Today, beech is widely planted for hedging and in deciduous woodlands, and mature, regenerating stands occur throughout mainland Britain below about 650 m [Preston, Pearman & Dines (2002) New Atlas of the British Flora. Oxford University Press] . The tallest and longest hedge in the world (according to the ) is the Meikleour Beech Hedge in , , .