Stephen Chow began as a temporary actor for TVB.[3][4] He entered TVB in early 1980s, and was trained there, although he had few opportunities to appear in films.[3] Chow graduated from TVB's acting classes in 1982.[5] Chow began to find some success with the children programme 430 Space Shuttle ,[6] which he co-hosted with Tony Leung Chiu-Wai.[7]

In 1987, Chow entered into the movie industry through the film Final Justice, which won him the Taiwan Golden Horse Award for Best Supporting Actor.[6][7]

While Chow became quite well known on TVB for his comedies (especially 1989's The Final Combat), he shot to stardom in 1990's All for the Winner. This film made him and his older sidekick Ng Man-Tat two of the most sought-after stars in the Hong Kong film industry.[6] Chow would collaborate with Ng on many of his more successful comedies, including Shaolin Soccer. Chow became Hong Kong's undisputed No. 1 comedian, taking over the mantle of Michael Hui. Unlike Hui, Chow's comedies are of the mo lei tau genre. With his expert comic timing and "rubber-faced mannerisms" ,[6] Chow ranked alongside Andy Lau, Chow Yun-fat and Jackie Chan as the major box office draws of the 1990s.[8]

In 1994 Chow began directing films, starting with From Beijing with Love, which he co-directed with Lee Lik-Chi. In the later half of the 1990s, mainland China began to warm to Stephen Chow movies. His film duology A Chinese Odyssey (1994) became (and remains) a cult classic in mainland China, baffling many Hong Kong observers, as the duology did only moderately well in Hong Kong. Nonetheless, on the mainland Chow rapidly became one of Hong Kong's most iconic film stars. [9]

In 2001 his film Shaolin Soccer grossed over 60 million HK dollars.[10] The film won Best picture, and Chow won Best Actor and Best Director at the 2002 Hong Kong Film Awards, receiving a total of seven wins from 2001–2003, including the Blue Ribbon Award for Best Foreign Language Film and the Golden Bauhinia Award for Best Picture and Best Director.[11] It was his first international hit and established his reputation in the West. In 2004 he directed the film Kung Fu Hustle winning 18 awards including BAFTA Best Film not in the English Language, five Golden Horse Awards and six Hong Kong Film Awards.[12]

Chow's film CJ7 began filming in July 2006 in the eastern Chinese port of Ningbo.[13] In August 2007 the film was given the title CJ7 (長江七號 Chang Jiang qi hao), a play on China's successful Shenzhou manned space missions—Shenzhou 5 and Shenzhou 6.[14] This film introduced newcomer Kitty Zhang as his romantic lead. In 2011, news was released that Chow had started work on a new Chinese Odyssey project. He is to star as well as co-direct, produce and screenwrite. He is to co-direct with Derek Kwok. Other names have included for the project are Anthony Wong, Show Luo and Shu Qi The film is to be more CGI based than the original version. .[15]

Chow often casts relatively new young actresses to play opposite him, especially as romantic leads, and many of these actresses have gone on to have successful film or music careers of their own. These actresses are collectively called the "Sing girls", and include Karen Mok, Vicki Zhao, Sharla Cheung, Athena Chu, Michelle Reis, Christy Chung, Gigi Leung, Cecilia Cheung, Huang Shengyi, and Zhang Yuqi.[16] 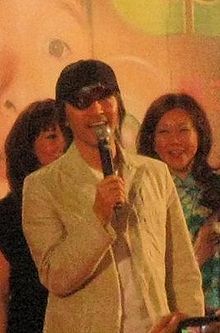