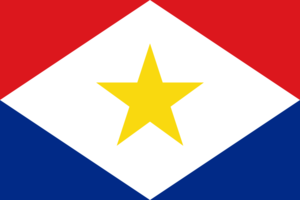 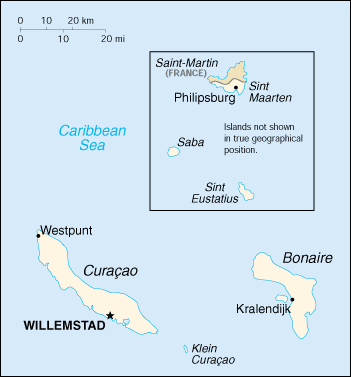 Its current major settlements include The Bottom, Windwardside, Hell's Gate and St. Johns. Despite the island's Dutch affiliation, English is the principal language spoken on the island and has been used in its school system since 1986. The Netherlands Antillean guilder is the official currency, but the is accepted everywhere on the island.

Saba is home to the , which was established by American expatriates in coordination with the Netherlands government. The school adds over 300 residents when classes are in session, and it is the prime educational attraction. A.M. Edwards Medical Center is the major provider of healthcare for local residents.

Saba is slated to become a special municipality within the country of the , but the schedule for this transition has been delayed indefinitely. [ [http://www.thedailyherald.com/news/daily/k006/steer006.html St. Maarten-St. Martin - Consensus, but no date set for new status ] ]

The origin of the name "Saba" is believed to be a variant of Dutch for "shoe", because the major industry of the island was shoemaking when visited by the Dominican monk in 1701. Another theory is that the island's name is derived from the Arawak Indian word for "rock", which was "siba".
is said to have sighted Saba on , , but did not land, as the island's perilously rocky shores were a major deterrent to Columbus and his crew. In 1632 a group of shipwrecked landed upon Saba; they stated they found the island uninhabited when they were retrieved by others. But there has been some evidence found indicating that Carib or Arawak Indians may have been on the island. In 1635 a stray Frenchman claimed Saba for and around the year 1640, the sent people from the neighboring island of to colonize the island. These settlers were then in 1664 evicted to St. Maarten by Sir , the notorious English , on one of the very few occasions that the nearly vertical rocky island was successfully invaded. finally took possession of Saba in 1816 after a spell of British occupation during the .

Through the 17th and 18th centuries its major industries were and , and, later, , particularly lobster fishing. In the 1600s Saba was believed to be a favorable hideout for n . England also deported its "undesirable" people to live in the Caribbean colonies. They too became pirates, taking haven on Saba. The most notable native Saban pirate was , who famously quipped "Dead Men Tell No Tales." Legitimate sailing and trade later became important and many of the island's men took to the seas, during which time Saba lace became an important product made by the island's women.

The remains of the 1640 settlements can be found on the west side at .

The environment of Saba is mainly composed of woodland forest with ferns and damp soil, and many mango trees. There used to be forests of trees until a hurricane in the 1960s destroyed many of the trees. The trees are considered at risk of going extinct on the island. Visitors refer to Saba's forests as "the Elfin Forest" because of its high altitude mist and mossy appearance. Since then there has been a woodland reserve created and aptly named "Elfin Forest Reserve". Saba's lush plant and animal wildlife are diverse and are looked after by the Saba Conservation Foundation.

4.3 km southwest of Saba is the , a large submerged of rich biodiversity, and a prime fishing ground, particularly for lobster.

The population of Saba consists of only 1,424 people who come from all over the world. The island's small size has led to a fairly small number of island families, who can trace their last names back to around a half-dozen families. This means that many last names are shared around the island, the most numerous being Hassell and Johnson. Most families are a rich intermixing of Dutch, Scottish, and n heritage. The population is also descended from the Irish who were exiled from that country after the ascension of in 1625; Charles exiled these Irish to the Caribbean in an effort to quell rebellion after he had forceably procured their lands for his Scottish noble supporters.

Historically, the island was traded among the many European nations that fought for power in the region. Slaves were also imported to work on Saba. Saba was the first Caribbean island to abolish slavery, in part because white settlers had to labor side by side with black slaves in order to successfully farm the steep, rocky terrain. Both English and Dutch are used on the island and taught in schools, though Dutch is the island's official language. In more recent years Saba has become home to a large group of , and around 250 immigrants who are either students or teachers at the .Sabans are mostly by faith; however, there is also a Holiness community on the island. Other religions practiced on the island include , Seventh-day Adventist, , and faiths.

Due to the very small size of the island, as well as the difficulty with which the steep slopes made farming, many Sabans took to the sea, making their living as legitimate sailors. Their seafaring traditions made it not uncommon for many men to seek better employment in the United States Navy; forging their birth certificates to enter the U.S. Navy without obstruction was also not uncommon. Among the more notable of these Saban sailors was , who received the United States' highest military honor, the (the Navy version of the award), for heroism during the Japanese , on , . During the attack, Hill lost his life soon after performing his major duty of releasing the USS Nevada from its berth at the harbor; the Nevada was the only ship that morning to attempt to make its way out of Pearl Harbor. Hill is most noted for having released the Nevada from its mooring, and then as the battleship began to steam away, jumping into the harbor, swimming after the ship, and then climbing up the battleship onto its deck to continue the fight. It should be noted that, due to the commonplace practice of one's forging his birth certificate to enter the U.S. Navy, Hill's Saban birth cannot be absolutely proven; however, it is known that his immediate and extended family were Saban.

There is one road, aptly called "The Road". Its construction was masterminded by who, despite the common opinion of Dutch and Swiss engineers, believed that a road could be built. [cite web |url=http://www.luketravels.com/saba/ |title=Saba Dutch Carribean Travel Guide |accessdate=2007-10-06 |format= |work= |publisher=LukeTravels.com] He took a correspondence course in , and started building the road with a crew of locals in 1938. [cite web |url=http://travel.canoe.ca/Travel/Caribbean/LesserAntilles/2006/11/15/2365625-sun.html |title=Saba’s road less travelled |accessdate=2007-10-06 |author=Diane Slawych |work= |publisher=Canoe.ca Travel] After five years of work, the first section of the road, from to The Bottom, was completed. It was not until 1947, however, that the first motor vehicle arrived. In 1951, the road to Windwardside and St. Johns was opened, and in 1958 the road was completed. Driving "The Road" is considered to be a daunting occasion, and the curves in Windwardside are extremely difficult. Driving is on the right hand side.

In 1963 the island had built a 400 metre landing strip for easier trips to the island by flight: . It is one of the shortest commercial runways in the world, and as such, only three models of airplane are known to land there. Consistent air service from is, as of 2006, available through Winward Island Airways (Winair). In 1972 a pier was completed in Fort Bay to access the island and has made it easier for visitors to come there. Travel is provided by the Saba ferry "Dawn II", as well as another ferry dubbed "The Edge".

Of note in The Bottom area, are 800 steps carved from stone, to go from Ladder Bay to The Bottom. Everything was carried to the island by hand until the late 20th century.

Saba lace (also known as "Spanish work") was a major export of Saba. In the 1870s, as a young lady, Mary Gertrude Hassell Johnson, was sent to a convent in for study - where she learned the difficult craft. The lacework spread through the island. The women of Saba began a mail-order business, and would copy addresses of businesses off of shipping containers from the United States, and write to the employees. Often they would get orders for the lacework, and it started a considerable cottage industry. By 1928, the women were exporting around $15,000 (USD) worth of lace products each year.

The island of Saba is known today for tourism, especially its . Because the island is relatively new to the tourism industry, it only sees about 25,000 visitors each year. Saba is increasing in its popularity as a vacation destination because of its excellent , and . The scuba diving in particular is deep and somewhat challenging; even though Saba is a small island it actually supports not one, but two s in case of diving emergencies. There are few anchorages, and a small airport with service from St. Maarten. There is also ferry service from St. Maarten. The ferries Dawn II and The Edge both travel to Saba three times a week. Saba's brilliantly colorful and pristine coral life make it one of the most sublime places to scuba dive in the world, and is often listed as one of the Top 10 diving destinations. Many attribute the underwater life's purity to the island's remoteness and the caring of the people. The waters around the island were designated as the in 1987, subject to government regulation to preserve its coral reefs and other marine life. Thus, Saba is known as the "Unspoiled Queen" of the Caribbean.

* - 18th Century pirate who originated the phrase, "Dead men tell no tales."
* - Recipient (posthumously) of the for heroism during the Japanese , , . (Believed to be a Saban native who forged a birth certificate to enter the U.S. Navy.)