History of the Cook Islands

History of the Cook Islands 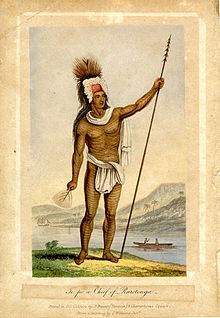 By 1900, administrative control was transferred to New Zealand; in 1965 residents chose self-government in free association with New Zealand.

The Cook Islands contain 15 islands in the group spread over a vast area in the South Pacific. The majority of islands are low coral atolls in the Northern Group, with Rarotonga, a volcanic island in the Southern Group, as the main administration and government centre. The main Cook Islands language is Rarotongan Māori. There are some variations in dialect in the 'outer' islands.

The Cook Islands were first settled around 600 AD by Polynesian people who migrated from nearby Tahiti, to the southeast. Over-population on many of the tiny islands of Polynesia led to these oceanic migrations. Tradition has it that this was the reason for the expedition of Ru, from Tupua'i in French Polynesia, who landed on Aitutaki and Tangiia, also from French Polynesia, who are believed to have arrived on Rarotonga around 800 AD. Some evidence for this is that the old road of Toi, the Ara Metua, which runs round most of Rarotonga, is believed to be at least 1200 years old. This 29 km long, paved road is a considerable achievement of ancient engineering, unsurpassed elsewhere in Polynesia.[2] Similarly, the northern islands were probably settled by expeditions from Samoa and Tonga.[3]

Spanish ships visited the islands in the 16th century; the first written record of contact with the Islands came with the sighting of Pukapuka by Spanish sailor Álvaro de Mendaña in 1595 who called it San Bernardo (Saint Bernard). Portuguese-Spaniard Pedro Fernández de Quirós, made the first recorded European landing in the islands when he set foot on Rakahanga in 1606, calling it Gente Hermosa (Beautiful People).[4]

British navigator Captain James Cook arrived in 1773 and 1777; Cook named the islands the 'Hervey Islands' to honour a British Lord of the Admiralty; Half a century later the Baltic German Admiral Adam Johann von Krusenstern published the Atlas de l'Ocean Pacifique, in which he renamed the islands the Cook Islands to honour Cook. Captain Cook navigated and mapped much of the group. Surprisingly, Cook never sighted the largest island, Rarotonga, and the only island that he personally set foot on was tiny, uninhabited Palmerston Atoll.[5]

In 1813, John Williams, a missionary on the Endeavour (not the same ship as Cook's), made the first official sighting of the island Rarotonga. [1] The first recorded landing by Europeans was in 1814 by the Cumberland; trouble broke out between the sailors and the Islanders and many were killed on both sides.

The islands saw no more Europeans until missionaries arrived from England in 1821. Christianity quickly took hold in the culture and retains that grip today.

Brutal Peruvian slave traders, known as blackbirders, took a terrible toll on the islands of the Northern Group in 1862 and 1863. At first the traders may have genuinely operated as labour recruiters, but they quickly turned to subterfuge and outright kidnapping to round up their human cargo. The Cook Islands was not the only island group visited by the traders, but Penrhyn Atoll was their first port of call and it has been estimated that three-quarters of the population was taken to Callao, Peru.[6] Rakahanga and Pukapuka also suffered tremendous losses.[7]

The Kingdom of Rarotonga was established in 1858 and in 1888 it became a British protectorate by the request of Queen Makea Takau, mainly to thwart French expansionism. Then later were transferred to New Zealand in 1901. They remained a New Zealand protectorate until 1965, at which point they became a self-governing territory in free association with New Zealand. The first Prime Minister Sir Albert Henry led the county until 1978 when he was accused of vote-rigging.

After achieving autonomy in 1965, the Cook Islands elected Albert Henry of the Cook Islands Party as their first Prime Minister. He was succeeded in 1978 by Tom Davis of the Democratic Party.

On June 13, 2008, a small majority of members of the House of Ariki attempted a coup, claiming to dissolve the elected government and to take control of the country's leadership. "Basically we are dissolving the leadership, the prime minister and the deputy prime minister and the ministers," chief Makea Vakatini Joseph Ariki explained. The Cook Islands Herald suggested that the ariki were attempting thereby to regain some of their traditional prestige or mana.[9][10] Prime Minister Jim Marurai described the take-over move as "ill-founded and nonsensical".[11] By June 23, the situation appeared to have normalised, with members of the House of Ariki accepting to return to their regular duties.[12]

The emigration of skilled workers to New Zealand and government deficits are continuing problems.

1606 — Portuguese-Spaniard Pedro Fernández de Quirós made the first recorded European landing in the islands when he set foot on Rakahanga.

1773 — Captain James Cook explores the islands and names them the Hervey Islands. Fifty years later they are renamed in his honour by Russian Admiral Adam Johann von Krusenstern.

1858 — The Cook Islands become united as a state, the Kingdom of Rarotonga.

1862 — Peruvian slave traders took a terrible toll on the islands of Penrhyn, Rakahanga and Pukapuka in 1862 and 1863.

1888 — Cook Islands are proclaimed a British protectorate and a single federal parliament is established.

1901 — The Cook Islands are annexed to New Zealand.

1924 — The All Blacks Invincibles stop in Rarotonga on their way to the United Kingdom and play a friendly match against a scratch Rarotongan team.

1946 — Legislative Council is established. For the first time since 1912, the territory has direct representation.

1965 — The Cook Islands become a self-governing territory in free association with New Zealand. Albert Henry, leader of the Cook Islands Party, is elected as the territory's first prime minister.

1979 — Sir Albert Henry is found guilty of electoral fraud and stripped of his premiership and his knighthood. Tom Davis becomes Premier.

1981 — Constitution is amended. Parliament grows from 22 to 24 seats and the parliamentary term is extended from four to five years. Tom Davis is knighted.

1984 — The country's first coalition government, between Sir Thomas and Geoffrey Henry, is signed in the lead up to hosting regional Mini Games in 1985. Shifting coalitions saw ten years of political instability. At one stage, all but two MPs were in government.

1985 — Rarotonga Treaty is opened for signing in the Cook Islands, creating a nuclear free zone in the South Pacific.

1986 — In January 1986, following the rift between New Zealand and the USA in respect of the ANZUS security arrangements Prime Minister Tom Davis declared the Cook Islands a neutral country, because he considered that New Zealand (which has control over the islands' defence and foreign policy) was no longer in a position to defend the islands. The proclamation of neutrality meant that the Cook Islands would not enter into a military relationship with any foreign power, and, in particular, would prohibit visits by US warships. Visits by US naval vessels were allowed to resume by Henry's Government.

1991 — The Cook Islands signed a treaty of friendship and co-operation with France, covering economic development, trade and surveillance of the islands' EEZ. The establishment of closer relations with France was widely regarded as an expression of the Cook Islands' Government's dissatisfaction with existing arrangements with New Zealand which was no longer in a position to defend the Cook Islands.

1995 — The French Government resumed its Programme of nuclear-weapons testing at Mururoa Atoll in September 1995 upsetting the Cook Islands. New Prime Minister Geoffrey Henry was fiercely critical of the decision and dispatched a vaka (traditional voyaging canoe) with a crew of Cook Islands' traditional warriors to protest near the test site. The tests were concluded in January 1996 and a moratorium was placed on future testing by the French government.

1997 — In November, Cyclone Martin in Manihiki kills at least six people; 80% of buildings are damaged and the black pearl industry suffered severe losses.

1999 — A second era of political instability begins, starting with five different coalitions in less than nine months, and at least as many since then.

2002 — Prime Minister Terepai Maoate is ousted from government following second vote of no-confidence in his leadership.

2006 — Parliamentary elections held. The Democratic Party keeps majority of seats in parliament, but is unable to command a majority for confidence, forcing a coalition with breakaway MPs who left, then rejoined the "Demos."