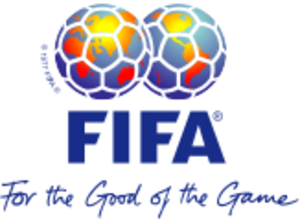 size = 163 px
motto = For the Game. For the World.
type = Sports federation
formation = ,
headquarters = ,
membership = 208 national associations
leader_title = President
leader_name =
language = English, German, French, Spanish, Italian
website= http://www.fifa.com/|The Fédération Internationale de Football Association (French for "International Federation of Association Football") , commonly known by its acronym, FIFA (usually pronEng|fifə or IPA|/fifæ/), is the international governing body of . Its headquarters are in , , and its current president is . FIFA is responsible for the organization and governance of football's major international tournaments, most notably the , held since 1930.

The need for a single body to oversee the worldwide game became apparent at the beginning of the 20th century with the increasing popularity of international fixtures. FIFA was founded in on , &mdash; the French name and acronym persist to this day, even outside French-speaking countries. Its first president was .

FIFA presided over its first international competition in 1906, but this met with little approval or success. This, in combination with economic factors, led to the swift replacement of Guérin with from , by now a member association. The next tournament staged, the football competition for the 1908 Olympics in London was more successful, despite the presence of professional footballers, contrary to the founding principles of FIFA.

Membership of FIFA expanded beyond Europe with the application of South Africa in 1909, Argentina and Chile in 1912, and Canada and the United States in 1913.

FIFA, however, floundered during , with many players sent off to war and the possibility of travel for international fixtures severely limited. Post-war, following the death of Woolfall, the organisation was run by Dutchman . It was saved from extinction, but at the cost of the withdrawal of the (of the ), who cited an unwillingness to participate in international competitions with their recent World War enemies. The Home Nations later resumed their membership.

The FIFA collection is held by the in .

Laws of the Game

The laws that govern football, known officially as the Laws of the Game, are not solely the responsibility of FIFA; they are maintained by a body called the (IFAB). FIFA has members on its board (four representatives); the other four are provided by the football associations of the : England, Scotland, Wales, and Northern Ireland, in recognition of their unique contribution to the creation and history of the game. Changes to the Laws of the Game must be agreed by at least six of the eight delegates.

FIFA is an association established under the Laws of Switzerland. Its headquarters are in Zurich.

FIFA's supreme body is the FIFA Congress, an assembly made up of a representative from each affiliated national federation. The Congress assembles in ordinary session now once every year, and extraordinary sessions have been held once a year since 1998 & now as and when requested. Only the Congress can pass changes to FIFA's by-laws.

Nations straddling the traditional boundary between Europe and Asia have generally had their choice of confederation. As a result, a number of s including Russia, Turkey, Cyprus, Armenia, Azerbaijan and Georgia have chosen to become part of UEFA despite the bulk of their land area being in Asia. Israel, although lying entirely within Asia, joined UEFA in 1994, after decades of its football teams being boycotted by many Arab and predominantly Muslim AFC countries. Kazakhstan moved from AFC to UEFA in 2002. Australia was the latest to move from OFC to AFC in January 2006.

Guyana and Suriname have always been CONCACAF members despite being South American countries.

No team from the OFC is offered automatic qualification to the World Cup. In recent World Cup qualifying cycles, the winner of their section had to play a play-off against a CONMEBOL side, a hurdle at which Australia have traditionally fallen. In an effort to improve their national and domestic teams Australia moved to the Asian Federation 2006. This allows Australia to play in Asian tournaments of a much higher standard (as well as being more numerous) such as the and the .

Australia successfully qualified for the by winning just such a playoff in a penalty shootout against Uruguay, just a few months after the clearance to move was granted. Initially, the qualification cycle was planned to provide the winner of OFC qualifying with a place in the final AFC qualification group, but this was scrapped in favour of a playoff between the OFC winner and an AFC team for a World Cup place.

In total, FIFA recognises 208 national federations and their associated men's national teams as well as 129 women's national teams; see the list of national football teams and their respective country codes. Curiously, FIFA has more member states than the , as FIFA recognises several non-sovereign entities as distinct nations, most notably the four within the . The are updated monthly and rank each team based on their performance in international competitions, qualifiers, and friendly matches. There is also a world ranking for women's football, updated four times a year.

FIFA awards, each year, the title of to the most prestigious player of the year, as part of its annual awards ceremony which also recognises team and international football achievements.

As part of its centennial celebrations in 2004, FIFA organised a "Match of the Century" between France and Brazil

FIFA frequently takes active roles in the running of the sport and developing the game around the world. One of its unique policies is to suspend teams and associated members from international competition when a government interferes in the running of FIFA's associate member organisations or if the associate is not functioning properly.

A recent high-profile suspension was of the Greek Football Federation for political interference. [ [http://news.bbc.co.uk/sport2/hi/football/internationals/5141866.stm BBC SPORT | Football | Internationals | Greece given suspension by Fifa ] ] Another recent suspension was on the Kenya Football Federation because it was not running the game in Kenya properly [ [http://sportsillustrated.cnn.com/2007/soccer/03/17/bc.soccer.africa.kenya/ SI.com - Soccer - FIFA orders Kenya to adopt 18-team league - Saturday March 17, 2007 12:15PM ] ] and also of Iraq.

The Asia wing of FIFA, the AFC is soon to force 22 leading associations in Asia to increase transparency, competition, quality training and a proper league structure with relegation, promotion and a 2nd division. Suspension will be imposed on any associate which doesn't co-operate with the reform outlines. Notably, one of the associations being targeted is that of Australia, a country whose professional sport leagues are all organised on the model of franchised teams and closed league membership, a system most commonly identified with North America. [ [http://www.taipeitimes.com/News/sport/archives/2007/02/14/2003349026 Taipei Times - archives ] ]

A 2007 FIFA ruling that a player can be registered with a maximum of three clubs, and appear in official matches for a maximum of three, in a year measured from to has lead to controversy, especially in those countries whose seasons cross that date barrier, as in the case of two former Ireland internationals.

The Iraq national team was suspended in May 2008, due to government interference with independent national sports authorities. [ [http://www.npr.org/templates/story/story.php?storyId=90864881 Soccer's FIFA Drops Iraq from Competition : NPR ] ] However the decision was overturned by FIFA on , , since the Iraqi government reversed its earlier decision in dissolving the Iraq Football Association. [ [http://www.theage.com.au/articles/2008/05/29/1211654201135.html Socceroos qualifier against Iraq to proceed] , , , .]

However, FIFA soon backed away from the proposal after international condemnation, ["": [http://www.nysun.com/article/56884 "FIFA's Altitude Ban Draws Fire From South America"] ] and under political pressure from the countries, first extending the maximum altitude to 2,800 m (9,190 ft) in June 2007, which made Bogotá and Quito viable international venues once again, and then waiving the restriction for La Paz in July 2007. [cite news |url=http://sportsillustrated.cnn.com/2007/soccer/07/06/bc.soc.fifa.altitudeban.ap/index.html |title=Blatter will wave La Paz altitude ban |work= |date=2007-07-06 |accessdate=2007-07-15]

The ban was reintroduced in December 2007 by FIFA for matches 2,750 metres above sea level, unless players were allowed to . [cite news |url=http://www.fifa.com/aboutfifa/federation/releases/newsid=660747.html#approval+refereeing+assistance+programme+upper+altitude+limit+fifa+competitions |title=Approval for Refereeing Assistance Programme and upper altitude limit for FIFA competitions |work= |date=2007-12-15 |accessdate=2008-05-27] However, the ban was again suspended by FIFA in May 2008. [cite news |url=http://www.fifa.com/aboutfifa/federation/bodies/media/newsid=779200.html#unanimous+support+fifa+club+world+cup+hosts+revealed| title=Unanimous support for 6+5, FIFA Club World Cup hosts revealed |work= |date=2008-05-27 |accessdate=2008-05-27]

In May 2006 British investigative reporter ' book "Foul" () caused controversy within the football world by detailing an alleged international cash-for-contracts scandal following the collapse of FIFA's marketing partner ISL, and revealed how some football officials have been urged to secretly repay the sweeteners they received.The book also exposed the vote-rigging that went on behind closed doors in the fight for Sepp Blatter's continued control of FIFA.

Nearly simultaneous with the release of "Foul" was a television expose by Jennings and BBC producer Roger Corke for the BBC news programme "Panorama". In this hour-long programme screened on , , Jennings and the "Panorama" team submit that Sepp Blatter is being investigated by Swiss police over his role in a secret deal to repay more than £1m worth of bribes pocketed by football officials.

All testimonies offered in the Panorama expose were provided through a disguised voice, appearance, or both, save one; , formerly a lecturer at in the (and from 2001-2003 Head of Special Projects for , a liaison to the e-FIFA project and a FIFA World Cup delegate), became the first high-level football insider to go public with substantial allegations of greed, corruption, nonfeasance and malfeasance by CONCACAF and FIFA leadership. During the Panorama expose, Brennan - the highest-level African-American in the history of world football - Jennings and many others exposed allegedly inappropriate allocations of money at CONCACAF, and drew connections between ostensible CONCACAF criminality and similar behaviours at FIFA. Brennan's book, "The Apprentice: Tragicomic Times Among the Men Running - and Ruining - World Football" is due out in late 2008 or early 2009.

Since the like the FIFA has adopted an anthem composed by the German composer . The FIFA Anthem or Hymn is played at the beginning of FIFA structured matches and tournaments such as international friendlies, the FIFA World Cup, FIFA Women's World Cup, and FIFA U-20 World Cup. [ [http://www.youtube.com/watch?v=R9I7bn1b4oc YouTube - FIFA anthem ] ]