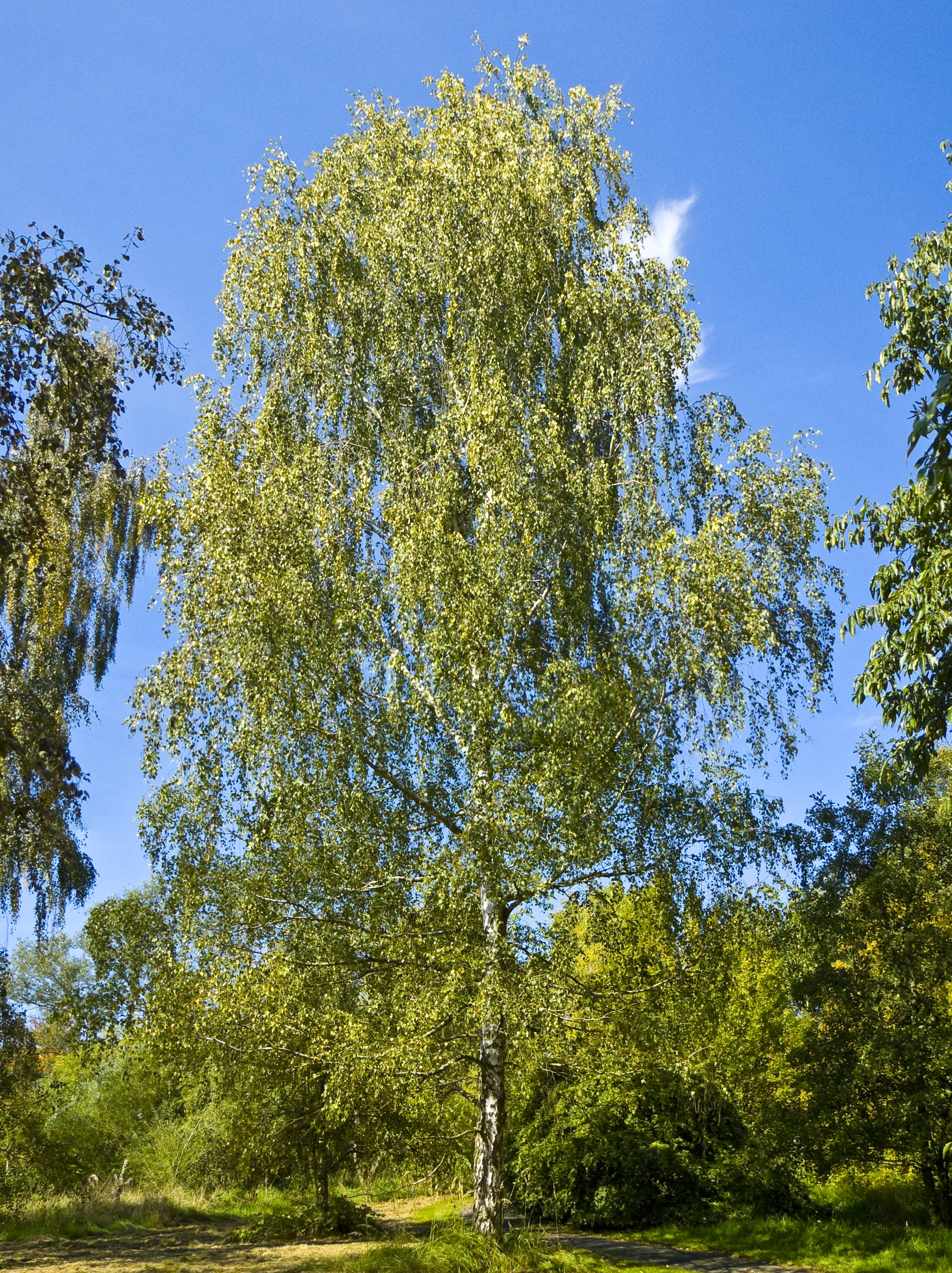 Birch species are generally small to medium-size s or s, mostly of northern climates. The simple leaves may be toothed or pointed. The fruit is a small samara, although the wings may be obscure in some species. They differ from the s ("Alnus", other genus in the family) in that the female s are not woody and disintegrate at maturity, falling apart to release the seeds, unlike the woody cone-like female alder catkins.

The bark of all birches is characteristically marked with long horizontal lenticels, and often separates into thin papery plates, especially upon the Paper Birch. It is practically imperishable, due to the resinous oil which it contains. Its decided color gives the common names Red, White, Black, Silver and Yellow to different species.

The buds form early and are full grown by midsummer, all are lateral, no terminal bud is formed; the branch is prolonged by the upper lateral bud. The wood of all the species is close-grained with satiny texture and capable of taking a fine polish; its fuel value is fair.

The leaves of the different species vary but little. All are alternate, doubly serrate, feather-veined, petiolate, and stipulate. Apparently they often appear in pairs, but these pairs are really borne on spur-like two-leaved lateral branchlets.

The flowers are monoecious, opening with or before the leaves and borne on three-flowered clusters in the axils of the scales of drooping or erect aments. Staminate aments are pendulous, clustered or solitary in the axils of the last leaves of the branch of the year or near the ends of the short lateral branchlets of the year. They form in early autumn and remain rigid during the winter. The scales of the staminate aments when mature are broadly ovate, rounded, yellow or orange color below the middle, dark chestnut brown at apex. Each scale bears two bractlets and three sterile flowers, each flower consisting of a sessile, membranaceous, usually two-lobed, calyx. Each calyx bears four short filaments with one-celled anthers or strictly, two filaments divided into two branches, each bearing a half-anther. Anther cells open longitudinally. The pistillate aments () are erect or pendulous, solitary; terminal on the two-leaved lateral spur-like branchlets of the year. The pistillate scales are oblong-ovate, three-lobed, pale yellow green often tinged with red, becoming brown at maturity. These scales bear two or three fertile flowers, each flower consisting of a naked ovary. The ovary is compressed, two-celled, and crowned with two slender styles; the ovule is solitary.

The ripened pistillate ament is called a strobile and bears tiny winged nuts, packed in the protecting curve of each brown and woody scale. These nuts are pale chestnut brown, compressed, crowned by the persistent stigmas. The seed fills the cavity of the nut. The cotyledons are flat and fleshy. All the species are easily grown from seed.

The common name "birch" is derived from an old Germanic root, "birka", with the root *"bherəg", "white, bright; to shine." The is named after the birch. The botanic name "Betula" is from the original .

Birches often form even-aged stands on light, well-drained, particularly acidic soils. They are regarded as , rapidly colonising open ground especially in al sequences following a disturbance or fire. Birches are early tree species to establish in primary successions and can become a threat to heathland if the s and saplings are not suppressed by grazing or periodic burning. Birches are generally lowland species, but some species such as "" have a distribution. Birch is used as a food plant by the e of a large number of ( and s) species, see .

:"Note: many American texts have "B. pendula" and "B. pubescens" confused, though they are distinct species with different chromosome numbers"

Birch wood is fine-grained and pale in colour, often with an attractive satin-like sheen. Ripple figuring may occur, increasing the value of the timber for veneer and furniture-making. The highly-decorative Masur (or n) birch, from "Betula verrucosa" var. "carelica" has ripple texture combined with attractive dark streaks and lines. Birch wood is suitable for veneer, and birch ply is among the strongest and most dimensionally-stable s, although it is unsuitable for exterior use.

Due to birch pulp’s short-fibre qualities, this can be used to make printing paper. In the thin bark coming off in winter was used as writing paper. This has excellent life. The paper is known as bhoorj patra. Bhoorj is the name of tree and patra means paper. This bark also has been used widely in ancient as note paper () and for decorative purposes and even making footwear — .

Extracts of birch are used for flavoring or leather oil, and in cosmetics such as or . In the past, commercial oil of wintergreen () was made from the ("Betula lenta"). "Birch tar" or "Russian Oil", extracted from birch bark [Birch Tar - How to collect it [http://www.bushcraftuk.com/index.php/DIY/Birch-Tar-How-to-collect-it.html] ] , is thermoplastic and waterproof; it was used as a glue on, for example, s, and also for medicinal purposes.

("Betula pendula") is 's national tree. Occasionally one uses leafy, fragrant twigs of silver birch to gently beat oneself in a . The twigs are called "vihta" or "vasta". This has a relaxing effect on the muscles.

Birch leaves make a and to make extracts for s and cosmetics.

Birch twigs were bound in a bundle, also called birch, to be used for , a form of corporal punishment.

Many of the of prized the birch for its bark, which due to its light weight, flexibility, and the ease with which it could be stripped from fallen trees, was often used for the construction of strong, waterproof but lightweight s, bowls, and s.

Birch is used as due to its high per unit weight and unit volume. Birch is prized by the as it burns well, without popping, even when frozen and freshly hewn. The bark is also used in starting fires. The bark will burn very well, even when wet, because of the oils it contains. With care, the bark can be split into very thin sheets that will ignite from even the smallest of sparks.

Birches also have spiritual importance in several religions, both modern and historical.

Birch ply is made from laminations of birch veneer. It is light but strong and has many other good properties. Birch ply is used to make longboards (skateboard), giving it a strong yet flexy ride. It is also used (often in very thin grades with many laminations) for making model aircraft.

Baltic Birch is among the most sought after wood in the manufacture of speaker cabinets. Birch has a natural resonance that peaks in the high and low frequencies, which are also the hardest for speakers to reproduce. This resonance compensates for the roll-off of low and high frequencies in the speakers, and evens the tone. Birch is known for having "natural EQ."

Drums are often made from Birch. Prior to the 1970s, Birch was one of the most popular drum woods. Because of the need for greater volume and midrange clarity, drums were made almost entirely from maple until recently, when advancements in live sound reinforcement and drum mics have allowed the use of Birch in high volume situations. Birch drums have a natural boost in the high and low frequencies, which allow the drums to sound fuller.

Birch wood is sometimes used as a tonewood for semi-acoustic and acoustic guitar bodies and occasionally used for solid-body guitar bodies. Birch wood is also a common material used in mallets for keyboard percussion.

In , , , , and parts of northern , is consumed as a refreshing beer, and is believed to have qualities. It is watery and pale green in color, with a slightly sweet flavor, and is bottled commercially. Birch sap may also be made into . The sap of particular birch species may also be rendered into , , (which most often turns out a sparkling wine, although of Sweden also produces a still birch wine), (a soft drink similar to ), and other foods. In contrast to , birch syrup is very difficult to produce, making it more expensive than other food syrups. It is also considerably less sweet than maple syrup and the sap for syrup production is not available until a month later than maple's. The syrup is made mainly in (from Alaska Birch) and (from several species), and more rarely elsewhere.

can also be extracted from birch, a , which has shown effectiveness in preventing, and in some cases repairing, .

According to the series "", birch is a preferred wood for the manufacture of .

In northern s birch is considered to be the most important allergenic tree , with an estimated 15-20% of sufferers sensitive to birch pollen grains.

The is an that grows on white birch trees, extracting the birch constituents and is used as a remedy for .

The bark is high in and betulinic acid, s which have potential as s, and other chemicals which show promise as industrial lubricants.Fact|date=September 2008

Birch bark can be soaked until moist in water, and then formed into a cast for a broken arm. [cite journal
author = WILLIAM ARTHUR CLARK
title = HISTORY OF FRACTURE TREATMENT UP TO THE SIXTEENTH CENTURY
journal =
volume = 19
issue = 1
pages = 61-62
publisher = The Journal of Bone & Joint Surgery, Inc.
location = Needham, MA, USA
date = 1937-01-01
quote = Another method cited was that of splints made of birch bark soaked in water until quite soft. They were then carefully fitted to the limb and tied with bark thongs. On drying, they became stiff and firm. There is no record of the use of extension, but, nevertheless, very few crippled and deformed Indians were to be seen.
url = http://www.ejbjs.org/cgi/reprint/19/1/47.pd]

The inner bark of birch can be ingested safely.

The birch is considered a national tree of Verify source|date=September 2008, where it used to be worshipped as a goddess during the Green Week in early June.