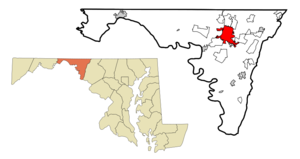 mapsize = 250x200px
map_caption = Location in Maryland and in Washington County

Hagerstown anchors the Hagerstown-Martinsburg, MD-WV Metropolitan Statistical Area, which lies just northwest of the Washington-Baltimore-Northern Virginia, DC-MD-VA-WV Combined Statistical Area in the heart of the . The population of the in 2000 was 222,771 and the 2007 estimate is 261,198 (U.S. Rank 170). Greater Hagerstown is the fastest growing metropolitan area in the State of Maryland and among the fastest growing in the United States

Hagerstown, due to the large number of roads and other transit that cross in the city, is known as the "Hub City". The nickname may also be applied to Hagerstown's status as the commercial and industrial hub for the Tri-State Area which includes much of Western Maryland, South Central , and the Eastern Panhandle of .

Hagerstown was founded in by , a volunteer Captain of Scouts, during the . Hager has been called the "Father of Washington County" due to Hager having laid the groundwork for its separation from in and the subsequent creation of Hagerstown as the county seat.

Hagerstown's strategic location at the border between the North and the South made the city a primary staging area and supply center for four major campaigns during the Civil War.

In , General 's troops used Hagerstown as a base to attack Rebels in the .

In the of , General 's command occupied the town while en route to the and Antietam.

In , the city was the site of several military incursions and engagements as General Lee’s army invaded and retreated at the .

In , Hagerstown was invaded by the Confederate Army under General . On Wednesday, July 6, Early sent 1,500 cavalry, commanded by Brigadier-General , into Hagerstown to levy a ransom for $200,000 and a large amount of clothing, in retribution for Federal destruction of farms, feed and cattle in the . McCausland misread the amount, and instead only collected $20,000. This is in contrast to neighboring , which McCausland razed on July 30 when the borough failed to supply the requested ransom of $500,000 in U.S. currency, or $100,000 in gold.

Throughout the Civil War, private physicians and citizens of Hagerstown took care of men from both the North and South in a number of locations including the Franklin Hotel, Washington House, Lyceum, Hagerstown Male Academy, Key-Mar College, and a number of private residences.

The spread of smallpox from returning soldiers to their families and friends was a substantial problem during the war. The Bethel Methodist Episcopal Church volunteered the use of its church as a smallpox hospital when an epidemic spread throughout the town. Following the war in 1872, Maryland and Virginia cooperated to re-inter Southern Confederate dead from their impromptu graves to cemeteries in Hagerstown, Frederick and . Roughly 60% however, remained unidentified. In 1877, 15 years after the , also known as the Battle of Sharpsburg, approximately 2,800 Confederate dead from that battle were re-interred in Washington Confederate Cemetery and in Rosehill Cemetery in Hagerstown [ [http://www.marylandmemories.org/civil_war.html The Crossroads of the Civil War - Hagerstown] , Hagerstown-Washington County Convention & Visitor's Bureau, Civil War, Retrieved 2007.] .

Hagerstown's nickname of the "Hub City" came from the large number of railroads (and roads) that served the city. Hagerstown was the center of the and an important city on the Pennsylvania, Norfolk and Western, Baltimore and Ohio, and Hagerstown and Frederick Railroads. Currently, the city is a vital location on CSX, Norfolk Southern, and the s.

During the era, the weathervane gained its characteristic bullet hole from a Confederate sharpshooter, who won a bet after shooting it a from a full city block away.

Finally in , the original was retired to the Museum of the Washington County Historical Society, later to be moved to its present display in the Jonathan Hager House. An exact replica has replaced it atop City Hall.

The weathervane has also been depicted in the city's annual Mummers Day Parade by Mr. Charles Harry Rittenhouse, Sr. sporting all of the necessary accoutrements of a German Soldier.

Little Heiskell is now also the mascot of .

From 1931 to 1984, was based in Hagerstown, Maryland and was by far the area's most prominent employer. The importance of the company to the city and the country as a whole earned Hagerstown its former nickname "Home of the Flying Boxcar."

Fairchild moved to Hagerstown in 1931 after Sherman Fairchild purchased a majority stock interest in Kreider-Reisner Aircraft Company of Hagerstown in 1929. Among Fairchild's products during World War II were PT-19/PT-23/PT-26 (Cornell) and AT-21 trainers, C-82 "Packet" cargo planes and missiles. At its height in World War II, Fairchild employed directly and indirectly up to 80% of Hagerstown's workforce or roughly 10,000 people.

Hagerstown is also the birthplace of -based which started out as Henson Aviation. It was founded by Richard A. Henson in 1931. Today, Hagerstown Regional Airport-Richard A. Henson Field is named as such in honor of the airlines' founder.

The city is approximately convert|70|mi|km northwest of , convert|72|mi|km west-northwest of , and convert|74|mi|km southwest of . Hagerstown is located south of the and north of the in a part of the Great Appalachian Valley known regionally as and locally as . The community also lies within close proximity of , , and . Natural landscape around Hagerstown consists of low, rolling hills with elevations of 500-800 feet above sea level and rich, fertile land that is well-suited for dairy farming, cornfields, and fruit orchards typical of Mid-Atlantic agriculture.

Hagerstown is situated in the transition between the zone and the zone (Köppen Dfa), with hot, humid summers and moderately cold winters.

The current city executive or Mayor of Hagerstown is Robert "Bob" E. Bruchey II (R) who has served the city since March 2006.

The representative body of Hagerstown is known as the City Council. Among its members are: Martin E. Brubaker, Kelly S. Cromer, Lewis C. Metzner, Penny May Nigh, and Alesia Parson-McBean.

Once primarily an industrial town, Hagerstown's economy depended heavily on railroad transportation and manufacturing, notably of aircraft, trucks, automobiles, textiles, and furniture. Today, the city has a diversified, stable business environment with modern service companies in various fields as well as continued strength in manufacturing and transportation in railroads and highways. Surrounding Hagerstown, there has been and continues to be a strong agricultural presence while tourism, especially with respect to the retail sector, provides additional boost to the local economy.

* The County Commuter buses provide extensive transportation within the city. More limited service is available to surrounding communities in Washington County.
* Miller Cabs and Turner Vans service the Hagerstown area but are usually available only upon request. Downtown Taxi! offers cab service people can hail in the downtown vicinity.
* and Atlantic Charter Buses provide coach bus service to major cities near and far including directly to Baltimore, Harrisburg, Richmond, and Washington.
* Airport codes|HGR|KHGR, also known as Richard A. Henson Field, is located approximately convert|5|mi|km due north of Hagerstown off U.S. Route 11 and Interstate 81. It is a frequent landing site for the U.S. President on the way to . Also, the airport will be commercially serviced again by with flights to and from starting 14 November 2008 [ [http://www.herald-mail.com/?cmd=displaystory&story_id=203697&format=html Joshua Bowman, "Allegiant announces service to Hagerstown; flights to Orlando to begin in November"] , The Herald-Mail ONLINE, Published 17 September 2008, Retrieved 17 September 2008.] . Alternatively, one can use , , , or , all of which are within convert|60|mi|km to convert|75|mi|km of Hagerstown.
* There is no passenger rail service in Hagerstown. offers and service to Union Station in while nearby offers MARC commuter rail service as well.

Hagerstown's location at the center of the so-called Historic HighlandsFact|date=October 2007 makes it an ideal starting point for touring, especially with respect to the Civil War. , the site of the bloodiest single day in American history, is located in nearby . South Mountain State Battlefield is also located in Washington County in Boonsboro. Gettysburg, Monocacy, and Harpers Ferry battlefields are all located within a 30 minute drive of Hagerstown.

, which features a restored fort used in the , is west of the city in nearby .

near Boonsboro pays tribute to the country's first president, . It is the oldest structure to honor the 'father of our country.'

Hagerstown is also home to the Headquarters.

Within the city, there are numerous parks including , which is home to the , Mansion House Art Gallery, Western Maryland 202 Locomotive Display and Museum, and the Hager House and Museum (once home of , founder of Hagerstown). Outside of the Park, showcases exhibits of Hagerstown's early railroad history. , located downtown, is a hands-on science and technology museum featuring exhibits in numerous galleries and display areas, including the [http://www.hagerstownaviationmuseum.org Hagerstown Aviation Museum] .

Hagerstown is home to the Maryland Theater, a symphony house that plays host to the and the annual Beauty Pageants. The city also has the [http://www.washingtoncountyplayhouse.com Washington County Playhouse] , a traditional dinner theatre. Academy Theater is set to open downtown to house the theatre group Potomac Playmakers. And the Barbara Ingram School for the Arts will be opening as a for gifted art students in downtown Hagerstown's arts and entertainment district.

Downtown Hagerstown recently has enjoyed a resurgence and now hosts several popular annual events. [http://www.downtownlivehagerstown.com Downtown Live!] is a alternative festival that features live reggae and rock music and entertainment held at various times throughout the year. The city draws thousands every year around May-June to the [http://www.blues-fest.org Western Maryland Blues Fest] , which showcases blues artists from around the country. The popular [http://www.augustoberfest.org Augustoberfest] celebrates Hagerstown's German heritage

Hagerstown is home to the minor-league baseball team. The Suns play in the and are a affiliate of the . They play in Municipal Stadium.

Hagerstown shares a radio market, the 166th largest in the United States, with Chambersburg, Pennsylvania and [ [http://www.arbitron.com/radio_stations/mm001050.asp Market Ranks and Schedules 151-200] , Arbitron, Fall 2007, Retrieved 22 March 2008.] . The following box contains all of the radio stations in the area:

* , a branch of the University of Maryland offering various associate's, bachelor's, and master's degree programs in connection with other state colleges and universities in Maryland.

The metropolitan area's population in 2000 was 222,771. The 2007 estimate is 261,198, making Greater Hagerstown the 170th largest metropolitan area in the United States. The growth rate from 2000-2007 is +17.2%, the 46th highest among metropolitan areas in the entire country and the highest in Maryland (and in West Virginia). The growth is mostly due to the influx of people from Washington, D.C. and Baltimore, MD.