Ocean City, sometimes known as OC, or OCMD, is an Atlantic Ocean resort town in Worcester County, Maryland, United States. Ocean City is widely known in the Mid-Atlantic region of the United States and is a frequent destination for vacationers in that area. The population was 7,173 at the 2000 census, although during summer weekends the city hosts between 320,000 and 345,000 vacationers.[1]

The land the city was built on, as well as much of the surrounding area, was once owned by Englishman Thomas Fenwick. In 1869, businessman Isaac Coffin built the first beach-front cottage to receive paying guests. During those days, people arrived by stage coach and ferry. They came to fish off the shore, to enjoy the natural beauty of the Atlantic Ocean pounding against the long strip of sandy beach, to collect seashells, or just to sit back and watch the rolling surf.

Soon after, other simple boarding houses were built on the strip of sand, with the activity attracting prominent businessmen from the Maryland Eastern Shore, Baltimore, Philadelphia, and Wilmington. They came not so much to visit as to survey the spit. A decision was made to develop it and 250 lots were cut into it, and a corporation was formed to help with the development of the land. The corporation stock of 4,000 shares sold for $25 each.

Prior to 1870, what is now Ocean City was known as "The Ladies' Resort to the Ocean."

The Atlantic Hotel, the first major hotel in the town, opened July 4, 1875. Besides the beach and ocean, it offered dancing and billiard rooms to the visitors of its more than 400 rooms, and for years it was the northern-most attraction in Ocean City. By 1878 tourists could come by railroad from Berlin to the shores of Sinepuxent Bay across from the town. By 1881, a line was completed across Sinepuxent Bay to the shore, bringing rail passengers directly into the town. 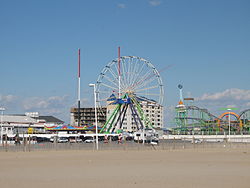 Ocean City's inlet during the off season

The Ocean City Inlet was formed during a major hurricane in 1933, which also destroyed the train tracks across the Sinepuxent Bay. The inlet separated what is now Ocean City from Assateague Island. The Army Corps of Engineers took advantage of nature's intervention and made the inlet at the south end of Ocean City permanent. The inlet eventually helped to establish Ocean City as an important Mid-Atlantic fishing port as it offered easy access to the fishing grounds of the Atlantic Ocean.

By the 1970s, big business flourished and gave birth to the construction of more than 10,000 condominium units, creating a spectacular sight of high-rise condominiums that assured every investor of a glimpse of the ocean and pounding surf. However, throughout the 1980s and into the early 90's, the width of the beach began to shrink, prompting the first of a series of beach replenishment projects.

The original pier was destroyed by a fire in 1994. There was a small water park and giant walk-through haunted house with live actors near the end of the pier and a New Orleans-style Hollywood in Wax Museum on the boardwalk side. In the late nineties the Wax Museum was turned into a Photon laser tag arena. The building now houses the Ripley's Believe it or Not! museum.

In 2002, Ocean City undertook the most recent of many, multi-million dollar, beach restoration programs, in an attempt to slow the westward migration of its beaches. The program pumped tons of sand from offshore and deposited it onto the beach. A dune line was also re-established in front of Ocean City's building line. Another similar project began after the 2006 tourist season closed. 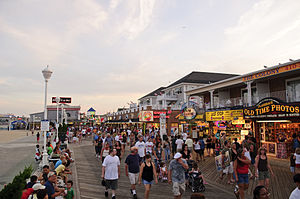 A view of the Ocean City boardwalk looking south.

Today, the Ocean City area continues to sprawl westward across the bay and toward Berlin and Ocean Pines. It is part of the Ocean Pines Micropolitan Statistical Area. The resort area accommodates approximately 8 million visitors per year.[2]

Ocean City now extends just over 9 miles (~15 km) from the southern inlet to the Delaware line. The strip now supports hotels, motels, apartment houses, shopping centers, residential communities, and condominiums. The southern tip houses the Ocean City Boardwalk. The boardwalk is the main shopping district and entertainment area of the town. The boardwalk has many prominent businesses including Fisher's Caramel Popcorn & Thrashers French Fries. Other notable boardwalk businesses are Dolle's Salt Water Taffy, the Atlantic Stand & Dumser's Dairyland. The Boardwalk has two amusement parks, Trimpers Rides and The Pier, which was recently renamed Jolly Roger at The Pier, after its sister uptown local amusement park. The downtown neighborhood is marked by Victorian style houses and other older buildings, many of which have been razed in recent years to construct more parking lots, hotels and condos. 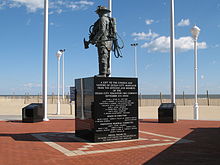 The firefighter memorial located on the boardwalk.

Ocean City has a long history of fishing, both commercial and recreational. The town bills itself as the "White Marlin Capital of the World." During the summer numerous charter and private boats fish for billfish, tuna, wahoo, and other game fish. In early August, one of the largest fishing tournaments in the world, the White Marlin Open, is held. Prize money for the largest White Marlin, Blue Marlin, and Tuna can range over 1 million dollars.

The town supports a year-round population of about 8,000, with the town itself being a major employer. Summer employment in Ocean City rises many multiples above that level, supported by a large number of college-age and young adults - many native to Eastern Europe and the United Kingdom - attracted by numerous job opportunities. In the summer, businesses and government agencies are augmented with about 100 seasonal police officers, plus extra firefighters and other workers.

A view of the Ocean City boardwalk at twilight looking north.

Tourism in the winter has picked up pace. Where once even many traffic lights were shut down or bagged up, increased traffic from golfers and Ocean City Convention Center conventions has convinced many seasonal restaurants and hotels to remain open. Many bars and restaurants that close during the winter re-open for St. Patrick's Day.

The city has erected a memorial to the firefighters who lost their lives on September 11. This memorial is located on the boardwalk, about six blocks from the inlet. The memorial consists of a firefighter statue, engraved brick and stone, and a piece of one of the twin towers that collapsed in New York City.

Ocean City is on the barrier spit, which encompasses Ocean City, South Bethany, Delaware, and Fenwick Island, Delaware. Ocean City's southern point is an inlet formed by the 1933 Chesapeake–Potomac hurricane. Rainfall and tides swelled the rivers and bays surrounding Ocean City until the overflowing water cut a 50 foot crevasse from the bay to the ocean. Ocean City businessmen had long sought funding to create an inlet to support a harbor, so residents seized upon the opportunity and built jetties to ensure the city's land remained divided from what is now Assateague Island.[4]

Ocean City's location in the middle of the East Coast affords it a mild Humid subtropical climate, with hot, humid summers and mild, wet winters. Summer highs often reach into the 80s, but ocean breezes keep the immediate coast cooler than inland locations. Due to the prominence of the Outer Banks of North Carolina, which lie to the south and east, tropical storms and hurricanes are very rare. 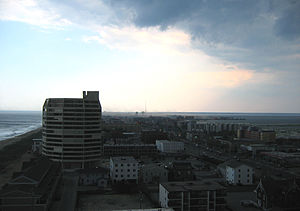 Ocean City's many high-rises offer a view of both the ocean and the bay.

There were 3,750 households out of which 11.6% had children under the age of 18 living with them, 39.2% were married couples living together, 6.4% had a female householder with no husband present, and 51.2% were non-families. 39.1% of all households were made up of individuals and 13.7% had someone living alone who was 65 years of age or older. The average household size was 1.91 and the average family size was 2.47.

Ocean City has only a single major north–south thoroughfare, Maryland Route 528, known as the Coastal Highway for most of its length, and as Philadelphia Avenue at its southern end. MD 528 continues north into Delaware as Delaware Route 1. East-west streets are numbered, starting at Division Street in the south, and continue until 146th street at the Delaware/Maryland border. Locations in the city are usually given as Oceanside (east of Coastal Highway) or Bayside (west of Coastal Highway).

Three bridges connect the spit to the mainland. U.S. Route 50 crosses the Harry W. Kelly Memorial Bridge and connects to MD 528 at Division Street. Maryland Route 90, a two-lane freeway, crosses the Assawoman Bay Bridge and connects to MD 528 at 62nd Street. Delaware Route 54 can also be used to reach Ocean City, as it meets Coastal Highway just north of the border. Ocean City is the eastern terminus of U.S. Route 50. Near Sacramento, California along U.S. 50 is a mileage sign whimsically stating the distance to Ocean City, MD (3073 miles.)

The Ocean City Transits fleet consists mainly of Thomas built buses. The CL960 model and the TL960 model both in 40-foot (12 m) lengths. They do run Eldorado National XHF buses in a 35-foot (11 m) length. Off season they run the Inlet to Delaware line and the summer season the West Ocean City Park and ride shuttle. The West Ocean City Park and Ride stop connects Ocean City's bus system to that of Shore Transit on the mainland peninsula. Ocean City did purchase a new order of at least 8 Blue Bird Xcel 102s in a 40-foot (12 m) length this year. They were purchased to replace the oldest set of Thomas built buses on the Ocean City fleet. Which were also numbered as 270s. Ocean City Transit is scheduled to receive somewhere from 10-17 Articulated buses from the Maryland Transit Administration which were built by North American Bus Industries in 1997 as Maryland Transit Administration is receiving 30 new hybrid articulated buses built by New Flyer.

Ocean City also maintains a fleet of open-air shuttles which run along the Boardwalk. The shuttles run the entire length of the boardwalk from the Inlet to 27th Street. South of 5th Street, the shuttle has a separate paved road it runs on parallel to the boardwalk. North of this, a painted lane down the middle of the boardwalk warns pedestrians of the shuttle. Passengers board and alight at any point along the route by notifying the driver.

Ocean City is known for its "Senior Week" activities. Recently graduated high school seniors from Maryland and surrounding states travel to Ocean City to spend a week with friends and away from parental supervision. Senior Week traditionally begins the first week after graduation. The Town of Ocean City has a "Play it Safe" campaign with scheduled events to keep the graduates safe.[7]