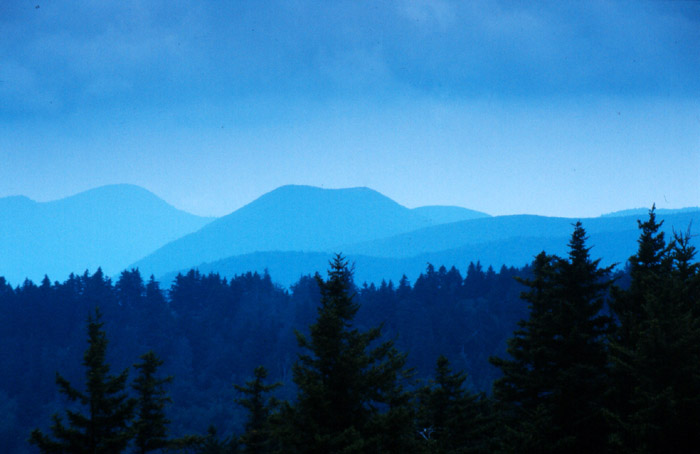 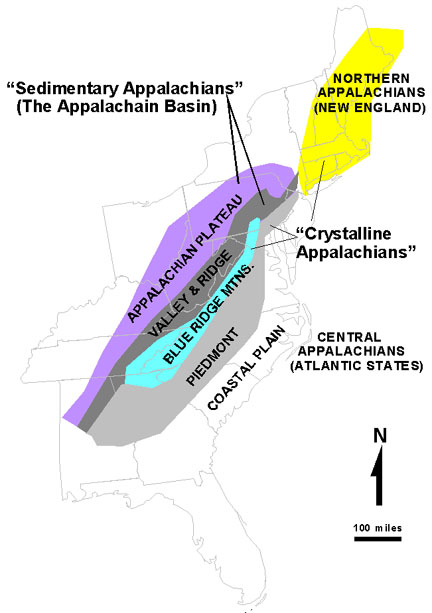 The Blue Ridge, or Blue Ridge Mountains, is a physiographic province of the larger Appalachian division. The province consists of the Northern and Southern physiographic sections, which divide near the Roanoke River gap.

:"See also: Although the term "Blue Ridge" is sometimes applied exclusively to the eastern edge or front range of the Appalachian Mountains, the geological definition of the Blue Ridge province extends westward to the Ridge and Valley area, encompassing the , the Great Balsams, the Roans, the Brushy Mountains (a "spur" of the Blue Ridge) and other s.

The Blue Ridge extends as far north into as South Mountain. While South Mountain dwindles to mere hills between Gettysburg and Harrisburg, the band of ancient rocks that forms the core of the Blue Ridge continues northeast through the and highlands, eventually reaching of and the of .

The Blue Ridge contains the highest mountains in eastern North America. About 125 peaksexceed convert|5000|ft|m in elevation. [cite web |last=Medina |first=M.A. | authorlink = | coauthors = J.C. Reid, and R.H. Carpenter |title=Physiography of North Carolina |publisher=North Carolina Geological Survey, Division of Land Resources |date=2004 |url=http://www.geology.enr.state.nc.us/proj_earth/pdf/color_physiography_600dpi.pdf |accessdate=2007-12-29 ] The highest peak in the Blue Ridge (and in the entire Appalachian chain) is Mt. Mitchell in at convert|6684|ft|m|0. There are 39 peaks in North Carolina and Tennessee higher than convert|6000|ft|m|-1; by comparison, only 's Mt. Washington rises above convert|6000|ft|m in the northern portion of the Appalachian chain.

The runs 469 miles (750 km) along crests of the Southern Appalachians and links two national parks: Shenandoah and Great Smoky Mountains. In many places along the parkway, there are metamorphic rocks () with folded bands of light-and dark-colored minerals, which sometimes look like the folds and swirls in a marble cake.

Most of the rocks that form the Blue Ridge Mountains are ancient s, metamorphosed volcanic formations, and sedimentary limestones. Recent studies completed by Richard Tollo, a professor and geologist at the , provide greater insight into the petrologic and geochronologic history of the Blue Ridge basement suites. Modern studies have found that the basement geology of the Blue Ridge is made of compositionally unique es and granitoids, including orthopyroxene-bearing charnockites. Analyses of minerals in the granites completed by John Aleinikoff at the have provided more detailed emplacement ages.

Many of the features found in the Blue Ridge and documented by Tollo and others have confirmed that the rocks exhibit many similar features in other North American Grenville-age s. The lack of a calc-alkaline affinity and zircon ages less than 1,200 Ma suggest that Blue Ridge are unique from the Adirondacks, , and possibly the . The petrologic and geochronologic data suggest that the Blue Ridge basement is a composite orogenic crust that was emplaced during several episodes from a crustal magma source. Field relationships further illustrate that rocks emplaced prior to 1,078-1,064 Ma preserve deformational features. Those emplaced post-1,064 Ma generally have a massive texture and missed the main episode of Mesoproterozoic compression. [Citation |first=Richard P. |last=Tollo | author-link = | first2 = John N. | last2 = Aleinkoff | first3 = Elizabeth A. | last3 = Borduas | contribution = Petrology and Geochronology of Grenville-Age Magmatism, Blue Ridge Province, Northern Virginia | contribution-url = |title=Northeastern Section (39th Annual) and Southeastern Section (53rd Annual) Joint Meeting |year=2004 |pages=| place = |publisher=Geological Society of America |url=http://gsa.confex.com/gsa/2004NE/finalprogram/abstract_69016.htm]

The English who settled in the early 1600s recorded that the native name for the Blue Ridge was "Quirank".

At the foot of the Blue Ridge, various tribes including the s, the , and the hunted and fished. As more settlers moved into Virginia, their economic and at times martial competition pushed the native inhabitants west. [cite web |last=|first=| authorlink = |title=History of Rappahannock County |publisher=Rappahannock County Administration |date=2005 |url=http://www.eoffice.com/offices/_540/675/5330/my_webserver/files/newsite/page2/page2.html |accessdate=2007-12-29 ]

*The song "Honeysuckle Blue" by
*The song "Stonewall Jackson's Way" [cite web |last=|first=| authorlink = | coauthors = |title=Stonewall Jackson's Way |publisher=Poetry and Music of the War Between the States |date=|url=http://www.civilwarpoetry.org/confederate/songs/tjway-song.html |accessdate=2007-12-29 ]
*The chorus of the popular song, . The song was popularized in the 1930s by the comedy duo , who sang it in their film, "Way Out West". Their recording was released (posthumously) in 1975, achieving chart success in the United Kingdom. [cite web |last=|first=| authorlink = |title=Trivia for Way Out West (1937) |publisher=Internet Movie Database |date=|url=http://www.imdb.com/title/tt0029747/trivia |accessdate=2007-12-29 ]
* sang of the Blue Ridge in the celebrated 1971 song "". The lyrics place the mountain range in the state of , although in fact, the only part of the range falling within that state is at its easternmost tip, at a point near .
*The song 'Baltimore' by the Virginia based band features the line "the Blue Ridge Mountains calling me back home".
*Been All Around This World - . "Up On The Blue Ridge Mountains, there I'll make my stand."
*The song "Blue Ridge Mountain Sky" by .
*The song "Blue Ridge Mountain Blues" by .
*The song "Blue Ridge Mountains" by contains the lyrics "...I heard that you missed your connecting flight, to the Blue Ridge Mountains over near Tennessee"
*'s "Houdini Blues," co-written with her father, has the lines: "I been on the other side of the Blue Ridge/Seen the Shenandoah rollin' there."
*Song and album "" by .