Wayne Station on SEPTA's Paoli/Thorndale line after renovations in 2010.

The Main Line is an unofficial historical and socio-cultural region of suburban Philadelphia, Pennsylvania, comprising a collection of affluent towns built along the old Main Line of the Pennsylvania Railroad which ran northwest from downtown Philadelphia parallel to Lancaster Avenue (US Route 30), a road originally built in 1792 as part of the Philadelphia and Lancaster Turnpike and designated as a portion of the "Lincoln Highway" when that transcontinental highway system was established in 1913. The rail line, from which the area affectionately got its name, was central to creating the Main Line communities which in the 19th century became home to many sprawling country estates built by Philadelphia's wealthiest families. Currently Amtrak's Keystone Corridor and SEPTA's Paoli/Thorndale Line service the route from Center City Philadelphia, serving the original Main Line communities and beyond. 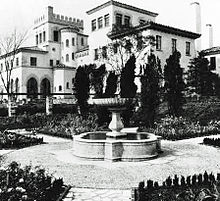 The Main Line region, before 17th century European colonization, was part of Lenapehoking, the longtime homeland of the matrilineal Lenni Lenape Native Americans (the "true people", or "Delaware Indians"). The Main Line area was first resettled by Europeans in the 1600s, after William Penn sold a tract of land, called the Welsh Tract, to a group of Welsh Quakers in London in 1681. This accounts for the many Welsh place names in the area.[1]

The Main Line of the Pennsylvania Railroad was constructed during the early nineteenth century as part of the Main Line of Public Works that spanned Pennsylvania. Later in the century, the railroad, which owned much of the land surrounding the tracks, encouraged the development of this picturesque environment by building way stations along the portion of its track closest to Philadelphia. The benefits of what was touted as "healthy yet cultivated country living" attracted Philadelphia's social elite, many of whom had one house in the city and another larger "country home" on the Main Line.

In the 20th century, many of these families relocated to the Main Line suburbs, part of the national trend of suburbanizaton. As a result, the Main Line saw rapid investment, prosperity, and growth, becoming greater Philadelphia's most affluent and fashionable region. The gracious estates with sweeping lawns and towering maples, the débutante balls and the Merion Cricket Club, which drew crowds of 25,000 spectators to its matches in the early 1900s, were the perfect setting for the classic 1940 Hepburn/ Grant/ Stewart motion picture The Philadelphia Story.[2]

The actual railroad line then continued on to Chicago, with major stations at Lancaster, Harrisburg and Pittsburgh. The railroad, since taken over by Amtrak, is still in service, although its route is slightly different from the original. It also serves the Paoli/Thorndale Line of the SEPTA Regional Rail system.

Memorial mile post on U.S. Route 30, in front of the Anthony Wayne Theater with AT&T tower in background.

Today the Main Line is another name for the western suburbs of Philadelphia along Lancaster Avenue (U.S. Route 30) and the former Pennsylvania Railroad Main Line, extending from the city limits to traditionally Bryn Mawr and ultimately Paoli, Pennsylvania[4] comprising an area of approximately 200 square miles (520 km2). The upper/upper middle class enclave outside of Philadelphia has historically been one of the bastions of "old money" in the Northeast along with places such as Westchester County, New York, Middlesex County, Massachusetts and Fairfield County, Connecticut. It is home to some of the wealthiest places in the United States, such as Gladwyne, which has the 14th highest per-capita income in the country with a population of 1,000 or more. The eastern section of Villanova was also ranked 39th in The Elite 100 Highest Income Neighborhoods in America with a median household income of $366,904.[5]

With diverse topography, steep cliffs along the Schuylkill River, rolling hills, and open meadows, the region has benefited from the early planning of William Penn. The Main Line is known for its multimillion-dollar stone Colonial homes, exclusivity, and upscale shopping at celebrated destinations like Suburban Square in Ardmore and the King of Prussia Mall, one of the largest in the country. There is some disparity on the Main Line, with smaller homes and walkable village life in Ardmore, Bala Cynwyd, and Narberth contrasting with the more established suburban landscape. There are also established African-American residential areas, in enclaves paralleling Lancaster Avenue said to have once housed people serving on the estates of the wealthy. The Main Line is also home to a large Jewish community, concentrated predominantly in Lower Merion. Many renowned colleges are located on the Main Line, including Cabrini College, Bryn Mawr College, Haverford College, Eastern University, Villanova University, and Saint Joseph's University. In addition, the Main Line hosts some of the most famous and exclusive private schools in the United States, including Valley Forge Military Academy, Malvern Preparatory School, and The Haverford School for Boys, Villa Maria Academy, Agnes Irwin School, Notre Dame Academy for girls, Country day school of the Sacred Heart for girls and Baldwin School for girls, and Episcopal Academy, Friends' Central School, Akiba Hebrew Academy (Now called Jack M. Barrack Hebrew Academy), and Shipley School for both boys and girls.

Communities on the Main Line

The Main Line proper is a line of communities extending northwest from the City of Philadelphia. From Philadelphia, the stations on what is now referred to as the Paoli/Thorndale (formerly "R5") Line are: Overbrook,[6] Merion, Narberth, Wynnewood, Ardmore, Haverford and Bryn Mawr, which inspired the mnemonic "Old Maids Never Wed And Have Babies". The contemporary definition of the Main Line now encompasses many communities past Bryn Mawr. They are sometimes referred to as the upper Main Line and include Rosemont, Villanova, Radnor, St. Davids, Wayne, Strafford, Devon, Berwyn, Daylesford, Paoli, and Malvern. In recent years, the service has extended even further west than Malvern.

Some communities, most notably Gladwyne, Bala Cynwyd, and Penn Valley, are included in what is commonly accepted as the Main Line, as they are typical Main Line communities. Neither, however, is located on the rail line for which the area is named and therefore may be considered culturally rather than geographically on the Main Line.

The Main Line by community:

The Main Line by municipality:[7]

There are no collective data for the Main Line so all data are by ZIP code. In comparison, the median family income and home price for the state of Pennsylvania are $68,646 and $155,000, respectively.[8][9] The following ZIP codes are those within the previously mentioned municipalities that make up the Main Line. All data, with the exception of average home price, are as of the 2000 census.[10] For comparison, the median family income of Beverly Hills, California is $110,040.

The Main Line is served by numerous different modes of transportation among which are three commuter rail lines operated by SEPTA. Connecting the region directly with center city Philadelphia are the Paoli/Thorndale Line which shares the former Pennsylvania Railroad four track Keystone Corridor grade with Amtrak, and the Manayunk/Norristown Line which operates over the former Reading Railroad Norristown grade. The light rail Norristown High Speed Line runs over the Philadelphia and Western Railroad line between 69th terminal in Upper Darby to Norristown.[25] Amtrak's intercity Keystone Service (New York to Harrisburg) and Pennsyvanian (New York to Pittsburgh) also serve the region with stops at the jointly operated Amtrak/SEPTA stations at Ardmore and Paoli.

The main thoroughfare through the Main Line is U.S. Route 30 which follows Lancaster Avenue (formerly the Philadelphia and Lancaster Turnpike) running east to west and serving as the backbone of the region by connecting a large majority of its towns and municipalities. Other highways serving the area are the Schuylkill Expressway (I-76) which connects it to Philadelphia, and the "Blue Route" (I-476) which runs north to south connecting the region with the Northeast Extension and the Pennsylvania Turnpike to the north, and to Philadelphia International Airport and I-95 to the south. 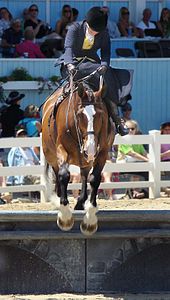 Rider jumping in a sidesaddle class at the Devon Horse Show. 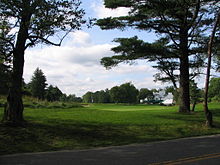 Looking down the first fairway at Merion Golf Club.

Private Clubs played an important role in the development of the Main Line, offering social gathering places, facilities for sports such as cricket, golf, tennis, squash, and horseback riding, for the families relocating from Philadelphia to the suburban region. Many of the clubs are known for their award winning golf courses, grass tennis courts, exclusivity, and social functions. Some of these clubs include: 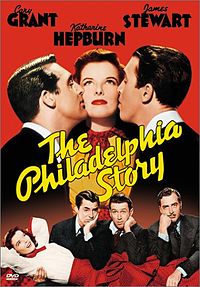 Cover of The Philadelphia Story

Notable Main Liners, Past and Present