Juniata County is a county located in the U.S. state of Pennsylvania. As of 2010, the population was 24,636. Juniata County was created on March 2, 1831, from part of Mifflin County and named for the Juniata River. Its county seat is Mifflintown[1].

The Central Pennsylvania accent is the dominant speech pattern in Juniata County.

There are many immigrant workers in Juniata County from Latin America and South-East Asia who moved to the area to work for Empire Kosher Poultry, the county's largest employer. Most of these immigrants speak Spanish or some other language of their first language. These immigrants speak English with varying degrees of fluency. 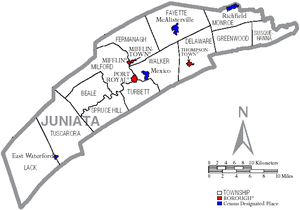 Under Pennsylvania law, there are four types of incorporated municipalities: cities, boroughs, townships, and, in at most two cases, towns. The following boroughs and townships are located in Juniata County: 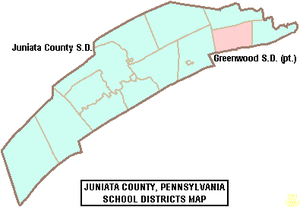 Academia Pomeroy Covered Bridge at 278 feet portal to portal is the longest remaining covered bridge in Pennsylvania, crossing the Tuscarora Creek between Spruce Hill and Beale Townships. Owned by the Juniata County Historical Society, Mifflintown, since 1962, it is listed on the National Register of Historic Places.