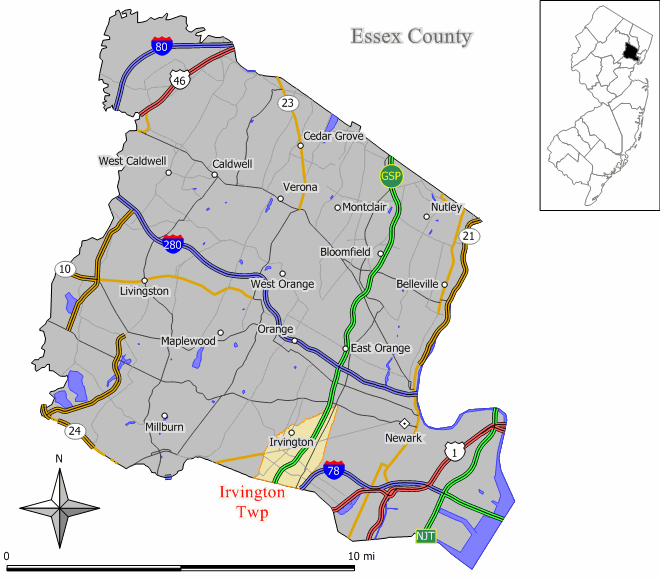 As part of the 2000 Census, 81.66% of Irvington's residents identified themselves as being . This was one of the highest percentages of African American people in the United States, and the third-highest in New Jersey (behind Lawnside at 93.6%, and East Orange at 89.46%) of all places with 1,000 or more residents identifying their ancestry. [ [http://www.epodunk.com/ancestry/African-American.html African American Communities] , . Accessed , .]

There were 22,032 households out of which 33.9% had children under the age of 18 living with them, 30.2% were married couples living together, 27.6% had a female householder with no husband present, and 34.6% were non-families. 29.3% of all households were made up of individuals and 6.4% had someone living alone who was 65 years of age or older. The average household size was 2.74 and the average family size was 3.39.

Irvington experienced the crack epidemic of the 1980s and the city still struggles with the aftermath today. The city still has a violent crime rate six times higher than New Jersey overall and a murder rate eight times higher than statewide statistics. As of 2007, the reported that Irvington had a violent crime rate of 22.4 incidents per 1,000 population, the highest of all 15 major urban areas in the state. [Jones, Richard G. [http://www.nytimes.com/2007/10/20/nyregion/20scene.html?pagewanted=all "A Cruel Turn for Irvington, a Town Already Battling Crime and Blight"] , "", , . Accessed , . "On Tuesday, the State Police reported that Irvington had the highest violent crime rate of the state’s 15 major urban areas, with 22.4 incidents for every 1,000 residents."] Irvington is more dangerous than Camden, but since it has a population less than 75,000, Irvington wasn't eligible to rank as one of the most dangerous cities in the country.

Clinton Township, which included what is now Irvington, Maplewood and parts of Newark and South Orange, was created on , .

Irvington was incorporated as an independent village on , , from portions of Clinton Township.

The hastened an exodus of families from that city, many of them moving the few short blocks to Irvington. Until 1965, Irvington was almost exclusively white. By 1980, the town was nearly 40% black, by 1990 it was 70%. On , , Fred Bost, the first black to serve on the Town Council, was sworn in as East Ward Councilman. [ [http://www.homesurfer.com/crimereports/view/crime_report.cfm?state=NJ&area=Irvington Crime statistics for Irvington] , Homesurfer. Accessed , .] Michael G. Steele, the town's first black mayor, was elected in 1990, followed by Sara B. Bost in 1994. The current Mayor is Wayne Smith.

Wayne Smith was directly elected by the residents to serve a four year term that began on , . As Chief Executive of the township, Mayor Smith has the enforcement responsibility for all ordinances, charter provisions, and preparation of the municipal budget. While the Mayor has the right to speak at Council meetings, he has no vote and is not required to attend.

The Council is the legislative body of the municipality and is composed of seven members. Four are elected from Wards and three are elected at-large. The Council can, by a majority vote, reduce items in the Mayor's budget, but needs a ⅔ majority to increase any item in the budget.

Members of the governing body are elected for four year terms the 2nd Tuesday in May each year. Terms are staggered biennially and the elections are non-partisan.

On the national level, Irvington leans strongly toward the Democratic Party. In 2004, Democrat John Kerry received 92% of the vote here, defeating Republican George W. Bush, who received around 7%.

Irvington's public schools are operated by . The district is one of 31 s statewide. [ [http://www.nj.gov/cgi-bin/education/abbotts/abbotturls.pl?string=code&maxhits=100 Abbott Districts] , . Accessed , .]

Irvington High School serves the city of Irvington. Of 316 Public High Schools examined, Irvington was ranked lowest in the state in a cover story in the September 2006 issue of "" magazine. [ [http://www.njmonthly.com/topschools/hslist3.lasso?-MaxRecords=50&-SkipRecords=300&-SortField=rank&-SortOrder=ascending&county=&high_school= "", September 2006.]

Portions of Irvington are part of an . In addition to other benefits to encourage employment within the Zone, shoppers can take advantage of a reduced 3½% rate (versus the 7% rate charged statewide). [ [http://www.state.nj.us/njbusiness/financing/tax/geographic.shtml#2 Geographic & Urban Redevelopment Tax Credit Programs: Urban Enterprise Zone Employee Tax Credit] , State of . Accessed , .]

Scheduled airline service is available at in neighboring Newark and Elizabeth.