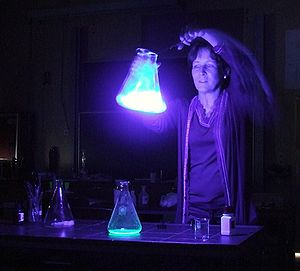 A chemoluminescent reaction carried out in an erlenmeyer flask producing a large amount of light.

Chemiluminescence (sometimes "chemoluminescence") is the emission of light with limited emission of heat (luminescence), as the result of a chemical reaction. Given reactants A and B, with an excited intermediate ◊,

For example, if [A] is luminol and [B] is hydrogen peroxide in the presence of a suitable catalyst we have:

The decay of this excited state[◊] to a lower energy level causes light emission. In theory, one photon of light should be given off for each molecule of reactant. This is equivalent to Avogadro's number of photons per mole of reactant. In actual practice, non-enzymatic reactions seldom exceed 1% QC, quantum efficiency.

In a chemical reaction, reactants collide to form a transition state, the enthalpic maximum in a reaction coordinate diagram, which proceeds to the product. Normally, reactants form products of lesser chemical energy. The difference in energy between reactants and products, represented as ΔHrxn, is turned into heat, physically realized as excitations in the vibrational state of the normal modes of the product. Since vibrational energy is generally much greater than the thermal agitation, it is rapidly dispersed into the solvent through solvent molecules' rotation and translation. This is how exothermic reactions make their solutions hotter. In a chemiluminescent reaction, the direct product of a reaction is delivered in an excited electronic state, which then decays into an electronic ground state through either fluorescence or phosphorescence, depending on the spin state of the electronic excited state formed. This is possible because chemical bond formation can occur on a timescale faster than electronic transitions, and therefore can result in discrete products in excited electronic states. 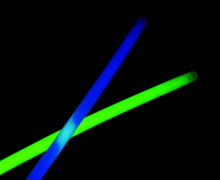 A green and blue glowstick.

The activated NO2[◊] luminesces broadband visible to infrared light as it reverts to a lower energy state. A photomultiplier and associated electronics counts the photons which are proportional to the amount of NO present. To determine the amount of nitrogen dioxide, NO2, in a sample (containing no NO) it must first be converted to nitric oxide, NO, by passing the sample through a converter before the above ozone activation reaction is applied. The ozone reaction produces a photon count proportional to NO which is proportional to NO2 before it was converted to NO. In the case of a mixed sample containing both NO and NO2, the above reaction yields the amount of NO and NO2 combined in the air sample, assuming that the sample is passed through the converter. If the mixed sample is not passed through the converter, the ozone reaction produces activated NO2[◊] only in proportion to the NO in the sample. The NO2 in the sample is not activated by the ozone reaction. Though unactivated NO2 is present with the activated NO2[◊], photons are only emitted by the activated species which is proportional to original NO. Final step, subtract NO from (NO + NO2) to yield NO2[4]

Enhanced chemiluminescence is a common technique for a variety of detection assays in biology. A horseradish peroxidase enzyme (HRP) is tethered to the molecule of interest (usually through labeling an immunoglobulin that specifically recognizes the molecule). This enzyme complex, then catalyzes the conversion of the enhanced chemiluminescent substrate into a sensitized reagent in the vicinity of the molecule of interest, which on further oxidation by hydrogen peroxide, produces a triplet (excited) carbonyl which emits light when it decays to the singlet carbonyl. Enhanced chemiluminescence allows detection of minute quantities of a biomolecule. Proteins can be detected down to femtomole quantities,[5] well below the detection limit for most assay systems.