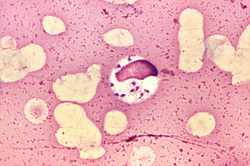 Leishmania donovani, (a species of protozoa) in a bone marrow cell

Protozoa are a diverse group of single-cell eukaryotic organisms,[1] many of which are motile. Throughout history, protozoa have been defined as single-cell protists with animal-like behavior, e.g., movement. Protozoa were regarded as the partner group of protists to protophyta, which have plant-like behaviour, e.g., photosynthesis.

Following the Greek root of the name, the singular form is protozoon /proʊtəˈzoʊ.ɒn/. Its use has, however, partially been replaced by the word protozoan, which was originally only used as an adjective. In the same manner the plural form protozoans is sometimes being used instead of protozoa.

In general, protozoans are referred to as animal-like protists because of movement (motile). However, both protozoa and protists are paraphyletic groups (not including all genetic relatives of the group). For example, Entamoeba is more closely related to humans than to Euglena. "Protozoa" is considered an outdated classification in more formal contexts. However, the term is still used in children's education.[2]

While there is no exact definition for the term protozoan, it often refers to a unicellular heterotrophic protist, such as the amoeba and ciliates. The term algae is used for microorganisms that photosynthesize. However, the distinction between protozoa and algae is often vague. For example, the algae Dinobryon has chloroplasts for photosynthesis, but it can also feed on organic matter and is motile.

Protozoans commonly range from 10 to 52 micrometers, but can grow as large as 1 mm, and are seen easily by microscope. The largest protozoans known are the deep-sea dewlling xenophyophores, which can grow up to 20 cm in diameter.

They were considered formerly to be part of the protista family. Protozoa exist throughout aqueous environments and soil, occupying a range of trophic levels.

Protozoa may absorb food via their cell membranes, some, e.g., amoebas, surround food and engulf it, and yet others have openings or "mouth pores" into which they sweep food. All protozoa digest their food in stomach-like compartments called vacuoles.[5]

As components of the micro- and meiofauna, protozoa are an important food source for microinvertebrates. Thus, the ecological role of protozoa in the transfer of bacterial and algal production to successive trophic levels is important. As predators, they prey upon unicellular or filamentous algae, bacteria, and microfungi. Protozoa are both herbivores and consumers in the decomposer link of the food chain. They also control bacteria populations and biomass to some extent. Protozoa such as the malaria parasites (Plasmodium spp.), trypanosomes and leishmania, are also important as parasites and symbionts of multicellular animals.

Some protozoa have life stages alternating between proliferative stages (e.g., trophozoites) and dormant cysts. As cysts, protozoa can survive harsh conditions, such as exposure to extreme temperatures or harmful chemicals, or long periods without access to nutrients, water, or oxygen for a period of time. Being a cyst enables parasitic species to survive outside of a host, and allows their transmission from one host to another. When protozoa are in the form of trophozoites (Greek, tropho = to nourish), they actively feed. The conversion of a trophozoite to cyst form is known as encystation, while the process of transforming back into a trophozoite is known as excystation.

Protozoa can reproduce by binary fission or multiple fission. Some protozoa reproduce sexually, some asexually, while some use a combination, (e.g., Coccidia). An individual protozoon is hermaphroditic.

Protozoa were previously often grouped in the kingdom of Protista, together with the plant-like algae and fungus-like slime molds. As a result of 21st-century systematics, protozoa, along with ciliates, mastigophorans, and apicomplexans, are arranged as animal-like protists. With the possible exception of Myxozoa, protozoa are not categorized as Metazoa.[6] Protozoans are unicellular organisms and are often called the animal-like protists because they subsist entirely on other organisms for food. Most protozoans can move about on their own. Amoebas, Paramecia, and Trypanosomes are all examples of animal-like Protists.

Protozoa have been divided traditionally on the basis of their means of locomotion, although this character is no longer believed to represent genuine relationships: