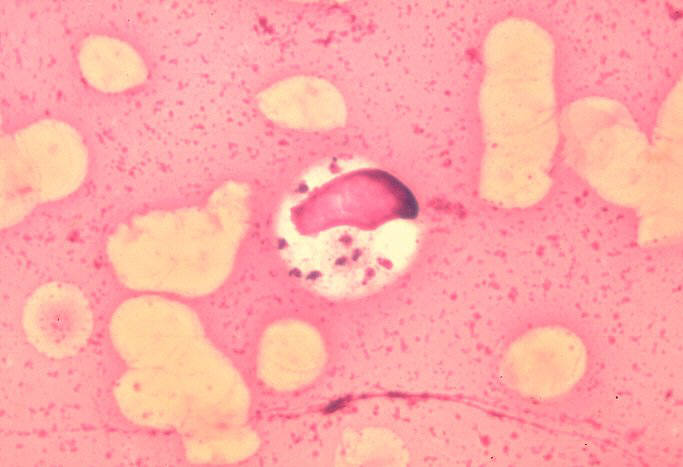 "Leishmania" is a of , and is the responsible for the disease .

The origins of "Leishmania" are unclear.

"Leishmania" cells have two morphological forms: "promastigote" (with an anterior )

"Cutaneous" (localized and diffuse) infections appear as obvious skin reactions. The most common is the "Oriental Sore" (caused by Old World species "L. major", "L. tropica", and "L. aethiopica"). In the New World, the most common culprits are "L. mexicana" and "L. (Viannia) braziliensis". Cutaneous infections are most common in , , , , and .

"Visceral" infections are often recognized by fever, swelling of the liver and spleen, and . They are known by many local names, of which the most common is probably "",

Antimonial compounds are the traditional treatments for leishmaniasis (, ). [ [http://www.icp.ucl.ac.be/~opperd/parasites/leish5.htm Treatment of Leishmaniasis ] ]

Resistance to the antimonials is prevalent in some parts of the world, and the most common alternative is [www.pdhealth.mil/downloads/Leish_brfng.ppt] (see for other treatment options). Paromomycin is an inexpensive alternative with fewer side effects than amphotericin that has funded for production as an for use in treatment of leishmaniasis, starting in India.

An important aspect of the "Leishmania" protozoan is its layer of (LPG). This is held together with a phosphoinositide membrane anchor, and has a tripartite structure consisting of a lipid domain, a neutral hexasaccharide, and a phosphrorylated galactose-mannose, with a termination in a neutral cap. Not only do these parasites develop post-phlebotomus digestion but, it is thought to be essential to oxidative bursts, thus allowing passage for infection. Characteristics of intracellular digestion include an fusing with a , releasing acid s which degrade , , proteins and .

The genomes of three "Leishmania" species ("L. major", "L. infantum" and "L. braziliensis") have been sequenced, revealing more than 8300 protein-coding and 900 genes. Almost 40% of protein-coding genes fall into 662 families containing between two and 500 members. Most of the smaller gene families are tandem arrays of one to three genes, while the larger gene families are often dispersed in tandem arrays at different throughout the . Each of the 35 or 36 s are organized into a small number of gene clusters of tens-to-hundreds of genes on the same DNA strand. These clusters can be organized in head-to-head (divergent) or tail-to-tail (convergent) fashion, with the latter often separated by , and/or genes. Transcription of protein-coding genes initiates bi-directionally in the divergent strand-switch regions between gene clusters and extends polyically through each gene cluster before terminating in the strand-switch region separating convergent clusters. "Leishmania" es are usually relatively small, consisting of a few different types of repeat sequence. Evidence can be found for recombination between several different groups of telomeres. The "L. major" and "L. infantum" genomes contain only ~50 copies of inactive degenerated "Ingi"/L1Tc-related elements (DIREs), while "L. braziliensis" also contains several telomere-associated transposable elements (TATEs) and spliced leader-associated (SLACs) retroelements. The "Leishmania" genomes share a conserved core proteome of ~6200 genes with the related trypanosomatids "Trypanosoma brucei" and "Trypanosoma cruzi" , but there are ~1000 "Leishmania"-specific genes (LSGs), which are mostly randomly distributed throughout the genome. There are relatively few (~200) species-specific differences in gene content between the three sequenced "Leishmania" genomes, but ~8% of the genes appear to be evolving at different rates between the three species, indicative of different selective pressures that could be related to disease pathology. About 65% of protein-coding genes currently lack functional assignment.

Leishmania as component of CVBD

Other microorganism-based diseases caused by ectoparasites include "", "", " ", Dirofilaria, Ehrlichia, and Anaplasma.

The strategy of the "Trojan horse" as a mechanism of of is, to avoid the and its memory function cleverly, with of infected and by , employing the non-danger surface signals of apoptotic cells.

Transmitted by the , the of the genus "" may switch the strategy of the first from eating/inflammation/killing to eating/no inflammation/no killing of their host ' and corrupt it for their own benefit. They use the willingly phagocytosing polymorphonuclear neutrophil granulocytes (PMN) rigorously as a tricky hideout, where they unrecognized from the immune system and enter the long-lived to establish a “hidden” .

By a infection PMN move out from the bloodstream and through the vessels’ endothelial layer, to the site of the infected tissue (dermal tissue after fly bite). They immediately start their business there as the first immune response and phagocyte the invader because of the foreign and activating surfaces. In that processes an emerges. Activated PMN secrete , particularly, to attract further and stimulate them to phagocytosis. Furthermore "Leishmania major" increases the secretion of IL-8 by PMN. In the parasites case, that may not sound reasonable at first. We can observe this mechanism on other , too. For microbes like these, there are several ways to survive inside cells. Surprisingly, the co-injection of apoptotic and viable pathogens causes by far a more fulminate course of disease than injection of only viable parasites. Exposing on the surface of dead parasites the anti-inflammatory signal , usually found on apoptotic cells, "Leishmania major" switches off the , so killing and degradation of the co-injected viable pathogen is not achieved.

In case of "Leishmania" progeny is not generated in PMN, but in this way they can survive and persist untangled on the primary site of infection. The forms also release LCF (Leishmania chemotactic factor) to recruit actively neutrophils but not other , for instance or . In addition to that, the production of (IFNγ)-inducible protein 10 (IP10) by PMN is blocked in attendance of "Leishmania", what involves the shut down of inflammatory and protective immune response by NK and recruitment. The pathogens stay viable during phagocytosis since their primary hosts, the PMN, expose apoptotic cell associated molecular pattern (ACAMP) signaling “no pathogen.”

The lifespan of is quite short. They circulate in for about 6 or 10 hours after leaving , whereupon they undergo spontaneous apoptosis. Microbial pathogens have been reported to influence cellular apoptosis by different strategies. Obviously because of the inhibition of 3-activation "Leishmania major" can induce the delay of neutrophils apoptosis and extend their lifespan for at least 2–3 days. The fact of extended lifespan is very beneficial for the development of infection because the final host cells for these parasites are macrophages, which normally migrate to the sites of infection within 2 or 3 days. The pathogens are not dronish; instead they take over the command at the primary site of infection. They induce the production by PMN of the chemokines MIP-1α and MIP-1β () to recruit macrophages. [cite journal
quotes = no
author = Laskay T. "et al".
year = 2003
title = Neutrophil granulocytes – Trojan horses for "Leishmania major" and other intracellular microbes?
journal = Trends in Microbiology
volume = 11
issue = 5
pages = 210-4
doi = 10.1016/S0966-842X(03)00075-1
id = PMID 12781523 ]

To save the integrity of the surrounding tissue from the cell components and contained in neutrophils, the apoptotic PMN are silently cleared by macrophages. Dying PMN expose the "eat me"-signal which is transferred to the outer leaflet of the during apoptosis. By reason of delayed apoptosis the parasites that persist in PMN are taken up into macrophages, employing an absolutely and non-phlogistic process. The strategy of this "silent phagocytosis" has following advantage for the parasite:

• Taking up apoptotic cells silences macrophage killing activity leading to a survival of the pathogens.

• Pathogens inside of PMN have no direct contact to the macrophage surface , because they can not see the parasite inside the apoptotic cell. So the activation of the phagocyte for immune activation does not occur.

* The International Leishmania Network [http://www.bdt.org.br/leishnet/ (ILN)] has basic information on the disease and links to many aspects of the disease and its vector.

* A discussion list [http://www.bdt.fat.org.br/listas/leish-l/ (Leish-L)] is also available with over 600 subscribers to the list, ranging from molecular biologists to public health workers, from many countries both inside and outside endemic regions. Comments and questions are welcomed.

* [http://www.kinetoplastids.com/ KBD: Kinetoplastid Biology and Disease] , is a website devoted to leishmaniasis, sleeping sickness and (American trypanosomiasis). It contains free access to full length peer review articles on these subjects. The site contains many articles relating to the unique kinetoplastid organelle and genetic material therein.