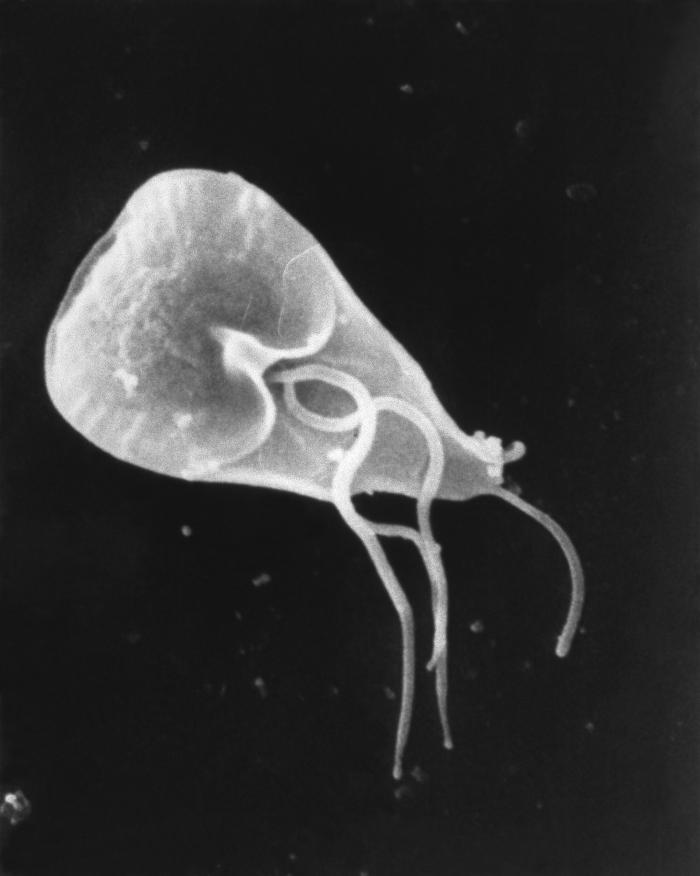 "Giardia lamblia" (synonymous with "Lamblia intestinalis" and "Giardia duodenalis") is a d n that colonises and reproduces in the small intestine, causing . The giardia parasite attaches to the by a adhesive disc, and reproduces via [Oxford textbook of Medicine, Fourth Edition, Volume 1. "Oxford University Press" pp759-760] . Giardiasis does not spread via the bloodstream, nor does it spread to other parts of the gastro-intestinal tract, but remains confined to the lumen of the small intestine [Harrison's Internal Medicine, Harrison's Online Chapter 199 "Protozoal intestinal infections and trochomoniasis"] . Giardia s absorb their nutrients from the lumen of the small intestine, and are s. If the organism is split and stained, it has a very characteristic pattern that resembles a smiley face.

Giardia affects humans, but is also one of the most common parasites infecting s, s and s . Mammalian hosts also include s, s, , and .

Giardia infection can occur through ingestion of dormant cysts in contaminated water, food, or by the fecal-oral route (through poor hygiene practices). The Giardia cyst can survive for weeks to months in cold water

As well as waterborne sources, fecal-oral transmission can also occur, for example in day care centres, where children may have poor hygiene practices. Those who work with children are also at risk of being infected, as are family members of infected individuals. Not all Giardia infections are symptomatic, and many people can unknowingly serve as carriers of the parasite.

The life cycle begins with a noninfective cyst being excreted with the faeces of an infected individual. The cyst is hardy, providing protection from various degrees of heat and cold, , and infection from other organisms. A distinguishing characteristic of the cyst is four nuclei and a retracted cytoplasm. Once ingested by a host, the trophozoite emerges to an active state of feeding and motility. After the feeding stage, the trophozoite undergoes asexual replication through longitudinal binary fission. The resulting trophozoites and cysts then pass through the digestive system in the faeces. While the trophozoites may be found in the faeces, only the cysts are capable of surviving outside of the host.

Distinguishing features of the trophozoites are large karyosomes and lack of peripheral chromatin, giving the two nuclei a halo appearance. Cysts are distinguished by a retracted cytoplasm. This protozoan lacks , although the discovery of the presence of mitochodrial remnants in one recent study "indicate that Giardia is not primitively amitochondrial and that it has retained a functional organelle derived from the original mitochondrial endosymbiont" [cite journal |author=Tovar J, León-Avila G, Sánchez LB, "et al" |title=Mitochondrial remnant organelles of Giardia function in iron-sulphur protein maturation |journal=Nature |volume=426 |issue=6963 |pages=172–6 |year=2003 |pmid=14614504 |doi=10.1038/nature01945]

Nomenclature for Giardia species are difficult, as humans and other animals appear to have morphologically identical parasites.

Colonization of the gut results in inflammation and villous atrophy, reducing the gut's absorptive capability. In humans, infection is symptomatic only about 50% of the time, and protocol for treating asymptomatic individuals is controversial. Symptoms of infection include (in order of frequency) diarrhea, malaise, excessive gas (often flatulence or a foul or sulphuric-tasting belch, which has been known to be so nauseating in taste that it can cause the infected person to vomit), (pale, foul smelling, greasy stools), epigastric pain, bloating, nausea, diminished interest in food, possible (but rare) vomiting which is often violent, and weight loss. Pus, mucus and blood are not commonly present in the stool. It usually causes "explosive diarrhea" and while unpleasant, is not fatal. In healthy individuals, the condition is usually self-limiting, although the infection can be prolonged in patients who are immunocompromised, or who have decreased gastric acid secretion.

People with recurring Giardia infections, particularly those with a lack of IgA, may develop chronic disease.

Lactase deficiency may develop in an infection with Giardia, however this usually does not persist for more than a few weeks, and a full recovery is the normFact|date=August 2007.

Some studies have shown that giardiasis should be considered as a cause of , this a result of the problems caused within the intestinal absorption system. [Cordingley, F.T.; Crawford, G.P. " [http://www.ncbi.nlm.nih.gov/pubmed/3458451?dopt=Abstract Giardia Infection Causes Vitamin B12 Deficiency] ." "Australian and New Zealand Journal of Medicine," Feb 1986, 16 (1): pages 78-9.]

Treatment of drinking water for Giardia is ordinarily indicated in wilderness regions in North America, Fact|date=August 2008, although at least four researchers disagree with this statement, including Robert W. Derlet, a professor at the University of California-Davis School of Medicine, Timothy P. Welch and Thomas R. Welsh of Tulane Medical School and the Children's Hospital of Cincinnati respectively, and Robert Rockwell, a widely quoted writer who is an engineer by training. [Welch, T.P. " [http://www.ncbi.nlm.nih.gov/pubmed/10737847 Risk of Giardiasis from Consumption of Wilderness Water in North America: a Systematic Review of Epidemiologic Data] ." "International Journal of Infectious Diseases," 2000; 4(2): 100-3.] [Derlet, Robert W. " [http://www.yosemite.org/naturenotes/DerletWater.htm High Sierra Water: What is in the H20] ?" "Sierra Nature Notes," Volume 3, April 2004.] [Welch, Thomas R. " [http://www.wemjournal.org/wmsonline/?request=get-document&issn=1080-6032&volume=015&issue=04&page=0235 Evidence-Based Medicine in the Wilderness: The Safety of Backcountry Water] ." "Wilderness and Environmental Medicine." Volume 15, Number 4, pages 235–237.] [Wood, T.D. " [http://www.rei.com/expertadvice/articles/water+risks.html Water: What Are the Risks] ?" "REI Expert Advice," February 2008.]

In other areas frequented by hikers and campers, as well as places where many residents rely on untreated surface water, reliable prevention typically involves filtration with a filter that has a nominal 1-micrometer pore size. Most chemical treatment methods, including common point-of-use treatments such as iodine and chlorine dioxide, are considered unreliable in inactivating Giardia cysts. Water parameters such as temperature, turbidity, and dissolved solids may also affect the effectiveness of such treatments.

Giardia lamblia infection in humans is frequently misdiagnosed. Accurate diagnosis requires an antigen test or, if that is unavailable, an ova and parasite examination of stool. Multiple stool examinations are recommended, since the cysts and trophozoites are not shed consistently. Given the difficult nature of testing to find the infection, including many false negatives, some patients should be treated on the basis of ; treating based on symptoms. [Curtis, Rick. " [http://www.princeton.edu/~oa/safety/giarlyme.shtml Outdoor Action Guide to Giardia, Lyme Disease and other 'post trip' Illnesses] ." "Outdoor Action," 2005-2008.]

Cats can be cured easily, lambs usually simply lose weight, but in calves the parasites can be fatal and often are not responsive to antibiotics or electrolytes. Carriers among calves can also be asymptomatic. Dogs have a high infection rate, as 30% of the population under one year old are known to be infected in kennels. The infection is more prevalent in puppies than in adult dogs. This parasite is deadly for chinchillas, so extra care must be taken by providing them with safe water. Infected dogs can be isolated and treated, or the entire pack at a kennel can be treated together regardless. Kennels should also be then cleaned with bleach or other cleaning disinfectants. The grass areas used for exercise should be considered contaminated for at least one month after dogs show signs of infection, as cysts can survive in the environment for long periods of time. Prevention can be achieved by quarantine of infected dogs for at least 20 days and careful management and maintenance of a clean water supply.

Under a normal compound light , "Giardia" often looks like a "clown face," with two nuclei outlined by adhesive discs above dark that form the "mouth." Cysts are oval, have four nuclei, and have clearly visible s.In spite of the common belief that all Eukaryotes have , Giardia is one of the few that lack these organelles.

Giardia alternates between two different forms &mdash; a hardy, dormant cyst that contaminates water or food and an active, disease-causing form that emerges after the parasite is ingested. grantee Dr. Frances Gillin of the and her colleagues cultivated the entire life cycle of this in the laboratory, and identified biochemical cues in the host's digestive system which trigger "Giardia"'s life cycle transformations. [cite journal |author=Hetsko ML, McCaffery JM, Svärd SG, Meng TC, Que X, Gillin FD |title=Cellular and transcriptional changes during excystation of Giardia lamblia "in vitro" |journal=Exp. Parasitol. |volume=88 |issue=3 |pages=172–83 |year=1998 |pmid=9562420 |doi=10.1006/expr.1998.4246] [cite journal |author=Svärd SG, Meng TC, Hetsko ML, McCaffery JM, Gillin FD |title=Differentiation-associated surface antigen variation in the ancient eukaryote Giardia lamblia |journal=Mol. Microbiol. |volume=30 |issue=5 |pages=979–89 |year=1998 |pmid=9988475|doi=10.1046/j.1365-2958.1998.01125.x] They also uncovered several ways in which the parasite evades the defences of the infected organism. One of these is by altering the s on its surface, which confounds the ability of the infected animal's to detect and combat the parasite (called ). Gillin's work reveals why "Giardia" infections are extremely persistent and prone to recur. In addition, these insights into "Giardia"s biology and survival techniques may enable scientists to develop better strategies to understand, prevent, and treat "giardia" infections.

The form of Giardia was first observed in 1681 by in his own diarrhea stools. In 1915, the parasite was named in honour of Professor A. Giard of Paris. His observations were recreated, using a single lensed microscope of the kind used by Leeuwenhoek, by British microbiologist who showed how clearly one could view Giardia through a primitive microscope. [Ford, BJ [http://www.brianjford.com/Giardia-14-06.pdf The discovery of "Giardia"] The Microscope 2005;53(4):148-153.]

In , a highly publicised Giardia and outbreak was reported in Sydney, Australia, but it was found to be due to mis-measurement of the concentrations of microbes in the water supply.A outbreak in Bergen (Norway) hastened work on adding UV treatment to the water facilities.In October , Giardia was found in the water supply for parts of Oslo, prompting authorities to advise the public to [http://www.aftenposten.no/english/local/article2052645.ece boil drinking water] ; but subsequent test showed levels of contamination too low to pose a threat, so this advice has since [http://www.vann-og-avlopsetaten.oslo.kommune.no/ been cancelled] . In , Giardia was identified as one of the causes of the afflicting s in in the 12th and 13th centuries. [Piers D. Mitchell, Eliezer Stern, and Yotam Tepper: [http://dx.doi.org/10.1016/j.jas.2007.11.017 Dysentery in the crusader kingdom of Jerusalem: an ELISA analysis of two medieval latrines in the City of Acre (Israel)] . Journal of Archaeological Science 2008;35(7):1849–1853.]