Ethylene (IUPAC name: ethene) is a gaseous organic compound with the formula C2H4. It is the simplest alkene (older name: olefin from its oil-forming property). Because it contains a carbon-carbon double bond, ethylene is classified as an unsaturated hydrocarbon. Ethylene is widely used in industry and is also a plant hormone.[3] Ethylene is the most produced organic compound in the world; global production of ethylene exceeded 107 million tonnes in 2005.[4] To meet the ever increasing demand for ethylene, sharp increases in production facilities are added globally, particularly in the Persian Gulf countries and in China.[5]

Orbital description of bonding between ethylene and a transition metal.

This hydrocarbon has four hydrogen atoms bound to a pair of carbon atoms that are connected by a double bond. All six atoms that comprise ethylene are coplanar. The H-C-H angle is 119°, close to the 120° for ideal sp² hybridized carbon. The molecule is also relatively rigid: rotation about the C-C bond is a high energy process that requires breaking the π-bond.

The π-bond in the ethylene molecule is responsible for its useful reactivity. The double bond is a region of high electron density, thus it is susceptible to attack by electrophiles. Many reactions of ethylene are catalyzed by transition metals, which bind transiently to the ethylene using both the π and π* orbitals.

Being a simple molecule, ethylene is spectroscopically simple. Its UV-vis spectrum is still used as a test of theoretical methods.[6]

Major industrial reactions of ethylene include in order of scale: 1) polymerization, 2) oxidation, 3) halogenation and hydrohalogenation, 4) alkylation, 5) hydration, 6) oligomerization, and 7) hydroformylation. In the United States and Europe, approximately 90% of ethylene is used to produce three chemical compounds—ethylene oxide, ethylene dichloride, and ethylbenzene—and a variety of kinds of polyethylene.[7]

Polyethylenes of various types consume more than half of world ethylene supply. Polyethylene, also called polythene, is the world's most widely-used plastic, being primarily used to make films used in packaging, carrier bags and trash liners. Linear alpha-olefins, produced by oligomerization (formation of short polymers) are used as precursors, detergents, plasticisers, synthetic lubricants, additives, and also as co-monomers in the production of polyethylenes.[7]

Ethylene undergoes oxidation by palladium to give acetaldehyde. This conversion remains a major industrial process (10M kg/y).[8] The process proceeds via the initial complexation of ethylene to a Pd(II) center.

Major intermediates from the halogenation and hydrohalogenation of ethylene include ethylene dichloride, ethyl chloride and ethylene dibromide. The addition of chlorine entails "oxychlorination," i.e. chlorine itself is not used. Some products derived from this group are polyvinyl chloride, trichloroethylene, perchloroethylene, methyl chloroform, polyvinylidiene chloride and copolymers, and ethyl bromide.[9]

Major chemical intermediates from the alkylation with ethylene is ethylbenzene, precursor to styrene. Styrene is used principally in polystyrene for packaging and insulation, as well as in styrene-butadiene rubber for tires and footwear. On a smaller scale, ethyltoluene, ethylanilines, 1,4-hexadiene, and aluminium alkyls. Products of these intermediates include polystyrene, unsaturated polyesters and ethylene-propylene terpolymers.[9]

The hydroformylation (oxo reaction) of ethylene results in propionaldehyde, a precursor to propionic acid and n-propyl alcohol.[9]

Ethylene can be hydrated to give ethanol, but this method is rarely used industrially.

Ethylene is produced in the petrochemical industry by steam cracking. In this process, gaseous or light liquid hydrocarbons are heated to 750–950 °C, inducing numerous free radical reactions followed by immediate quench to stop these reactions. This process converts large hydrocarbons into smaller ones and introduces unsaturation. Ethylene is separated from the resulting complex mixture by repeated compression and distillation. In a related process used in oil refineries, high molecular weight hydrocarbons are cracked over zeolite catalysts. Heavier feedstocks, such as naphtha and gas oils require at least two "quench towers" downstream of the cracking furnaces to recirculate pyrolysis-derived gasoline and process water. When cracking a mixture of ethane and propane, only one water quench tower is required.[9]

The areas of an ethylene plant are:

Since ethylene production is energy intensive, much effort has been dedicated to recovering heat from the gas leaving the furnaces. Most of the energy recovered from the cracked gas is used to make high pressure (1200 psig) steam. This steam is in turn used to drive the turbines for compressing cracked gas, the propylene refrigeration compressor, and the ethylene refrigeration compressor. An ethylene plant, once running, does not need to import steam to drive its steam turbines. A typical world scale ethylene plant (about 1.5 billion pounds of ethylene per year) uses a 45,000 horsepower (34,000 kW) cracked gas compressor, a 30,000 hp (22,000 kW) propylene compressor, and a 15,000 hp (11,000 kW) ethylene compressor.

Ethylene can be produced via ethanol dehydration by heating absolute ethanol with concentrated sulfuric acid[14] or by passing ethanol vapor over hot aluminum oxide catalyst.

Interestingly for such a useful compound, ethylene is rarely used in organic synthesis in the laboratory.[15]

Ethylene as a plant hormone

Ethylene serves as a hormone in plants.[16] It acts at trace levels throughout the life of the plant by stimulating or regulating the ripening of fruit, the opening of flowers, and the abscission (or shedding) of leaves. Commercial ripening rooms use "catalytic generators" to make ethylene gas from a liquid supply of ethanol. Typically, a gassing level of 500 ppm to 2,000 ppm is used, for 24 to 48 hours. Care must be taken to control carbon dioxide levels in ripening rooms when gassing, as high temperature ripening (68F) has been seen to produce CO2 levels of 10% in 24 hours.[17]

History of ethylene in plant biology

Ethylene has been used in practice since the ancient Egyptians, who would gash figs in order to stimulate ripening (wounding stimulates ethylene production by plant tissues). The ancient Chinese would burn incense in closed rooms to enhance the ripening of pears. In 1864, it was discovered that gas leaks from street lights led to stunting of growth, twisting of plants, and abnormal thickening of stems.[16] In 1901, a Russian scientist named Dimitry Neljubow showed that the active component was ethylene.[18] Doubt discovered that ethylene stimulated abscission in 1917.[19] It wasn't until 1934 that Gane reported that plants synthesize ethylene.[20] In 1935, Crocker proposed that ethylene was the plant hormone responsible for fruit ripening as well as senescence of vegetative tissues.[21] 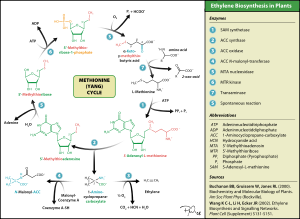 Ethylene is produced from essentially all parts of higher plants, including leaves, stems, roots, flowers, fruits, tubers, and seedlings.

The biosynthesis of the hormone starts with conversion of the amino acid methionine to S-adenosyl-L-methionine (SAM, also called Adomet) by the enzyme Met Adenosyltransferase. SAM is then converted to 1-aminocyclopropane-1-carboxylic-acid (ACC) by the enzyme ACC synthase (ACS); the activity of ACS determines the rate of ethylene production, therefore regulation of this enzyme is key for the ethylene biosynthesis. The final step requires oxygen and involves the action of the enzyme ACC-oxidase (ACO), formerly known as the Ethylene Forming Enzyme (EFE). Ethylene biosynthesis can be induced by endogenous or exogenous ethylene. ACC synthesis increases with high levels of auxins, especially Indole acetic acid (IAA), and cytokinins. ACC synthase is inhibited by abscisic acid.

Environmental and biological triggers of ethylene

Environmental cues can induce the biosynthesis of the plant hormone. Flooding, drought, chilling, wounding, and pathogen attack can induce ethylene formation in the plant. In flooding, root suffers from lack of oxygen, or anoxia, which leads to the synthesis of 1-aminocyclopropane-1-carboxylic acid (ACC). ACC is transported upwards in the plant and then oxidized in leaves. The product, the ethylene causes epinasty of the leaves.

One speculation recently put forth for epinasty is the downward pointing leaves may act as pump handles in the wind. The ethylene may or may not additionally induce the growth of a valve in the xylem, but the idea would be that the plant would harness the power of the wind to pump out more water from the roots of the plants than would normally happen with transpiration.

Like the other plant hormones, ethylene is considered to have pleiotropic effects. This essentially means that it is thought that at least some of the effects of the hormone are unrelated. What is actually caused by the gas may depend on the tissue affected as well as environmental conditions. In the evolution of plants, ethylene would simply be a message that was coopted for unrelated uses by plants during different periods of the evolutionary development.

Ethylene shortens the shelf life of many fruits by hastening fruit ripening and floral senescence. Ethylene will shorten the shelf life of cut flowers and potted plants by accelerating floral senescence and floral abscission. Flowers and plants which are subjected to stress during shipping, handling, or storage produce ethylene causing a significant reduction in floral display. Flowers affected by ethylene include carnation, geranium, petunia, rose, and many others.[25]

Commercial growers of bromeliads, including pineapple plants, use ethylene to induce flowering. Plants can be induced to flower either by treatment with the gas in a chamber, or by placing a banana peel next to the plant in an enclosed area.

Chrysanthemum flowering is delayed by ethylene gas [28] and growers have found that carbon dioxide 'burners' and the exhaust fumes from inefficient glasshouse heaters can raise the ethylene concentration to 0.05 vpm causing delay in flowering of commercial crops.

Many geologists and scholars believe that the famous Greek Oracle at Delphi (the Pythia) went into her trance-like state as an effect of ethylene rising from ground faults.[29]

Ethylene appears to have been discovered by Johann Joachim Becher, who obtained it by heating ethanol with sulfuric acid;[30] he mentioned the gas in his Physica Subterranea (1669).[31] Joseph Priestley also mentions the gas in his Experiments and observations relating to the various branches of natural philosophy: with a continuation of the observations on air (1779), where he reports that Jan Ingenhousz saw ethylene synthesized in the same way by a Mr. Enée in Amsterdam in 1777 and that Ingenhousz subsequently produced the gas himself.[32] The properties of ethylene were studied in 1795 by four Dutch chemists, Johann Rudolph Deimann, Adrien Paets van Troostwyck, Anthoni Lauwerenburgh and Nicolas Bondt, who found that it differed from hydrogen gas and that it contained both carbon and hydrogen.[33] This group also discovered that ethylene could be combined with chlorine to produce the oil of the Dutch chemists, 1,2-dichloroethane; this discovery gave ethylene the name used for it at that time, olefiant gas (oil-making gas.)[34]

In the mid-19th century, the suffix -ene (an Ancient Greek root added to the end of female names meaning "daughter of") was widely used to refer to a molecule or part thereof that contained one fewer hydrogen atoms than the molecule being modified. Thus, ethylene (C2H4) was the "daughter of ethyl" (C2H5). The name ethylene was used in this sense as early as 1852.

In 1866, the German chemist August Wilhelm von Hofmann proposed a system of hydrocarbon nomenclature in which the suffixes -ane, -ene, -ine, -one, and -une were used to denote the hydrocarbons with 0, 2, 4, 6, and 8 fewer hydrogens than their parent alkane.[35] In this system, ethylene became ethene. Hofmann's system eventually became the basis for the Geneva nomenclature approved by the International Congress of Chemists in 1892, which remains at the core of the IUPAC nomenclature. However, by that time, the name ethylene was deeply entrenched, and it remains in wide use today, especially in the chemical industry.

The 1979 IUPAC nomenclature rules made an exception for retaining the non-systematic name ethylene,[36] however, this decision was reversed in the 1993 rules[37] so the IUPAC name is now ethene.

Like all hydrocarbons, ethylene is an asphyxiant and combustible. It has been used as an anesthetic.[38] It is listed as an IARC class 3 carcinogen.