Nitrile
This article is about the group of organic compounds. For the synthetic rubber product, see Nitrile rubber.

The structure of the nitrile group

A nitrile is any organic compound that has a -C≡N functional group.[1] The prefix cyano- is used interchangeably with the term nitrile in industrial literature. Nitriles are found in many useful compounds, one example being super glue (methyl cyanoacrylate).

Inorganic compounds containing the -C≡N group are not called nitriles, but cyanides instead.[2] Though both nitriles and cyanides can be derived from cyanide salts, most nitriles are not nearly as toxic.

The first compound of the homolog row of nitriles, the nitrile of formic acid, hydrogen cyanide was first synthesized by C.W. Scheele in 1782.[3] In 1811 J. L. Gay-Lussac was able to prepare the very toxic and volatile pure acid. The nitrile of benzoic acids was first prepared by Friedrich Wöhler and Justus von Liebig, but due to minimal yield of the synthesis neither physical nor chemical properties were determined nor a structure suggested. Théophile-Jules Pelouze synthesized propionitrile in 1834 suggesting it to be an ether of propionic alcohol and hydrocyanic acid.[4] The synthesis of benzonitrile by Hermann Fehling in 1844, by heating ammonium benzoate, was the first method yielding enough of the substance for chemical research. He determined the structure by comparing it to the already known synthesis of hydrogen cyanide by heating ammonium formate to his results. He coined the name nitrile for the newfound substance, which became the name for the compound group.[5]

Nitriles occur naturally in a diverse set of plant and animal sources. Over 120 naturally occurring nitriles have been isolated from terrestrial and marine sources. Nitriles are commonly encountered in fruit pits, especially almonds, and during cooking of Brassica crops (such as cabbage, brussel sprouts, and cauliflower), which release nitriles being released through hydrolysis. Mandelonitrile, a cyanohydrin produced by ingesting almonds or some fruit pits, releases hydrogen cyanide and is responsible for the toxicity of cyanogenic glycosides.[6]

Over 30 nitrile-containing pharmaceuticals are currently marketed for a diverse variety of medicinal indications with more than 20 additional nitrile-containing leads in clinical development. The nitrile group is quite robust and, in most cases, is not readily metabolized but passes through the body unchanged. The types of pharmaceuticals containing nitriles is diverse, from Vildagliptin an antidiabetic drug to Anastrazole which is the gold standard in treating breast cancer. In many instances the nitrile mimics functionality present in substrates for enzymes, whereas in other cases the nitrile increases water solubility or decreases susceptibility to oxidative metabolism in the liver.[7]

Industrially, the main methods for producing nitriles are ammoxidation and hydrocyanation. Both routes are green in the sense that they do not generate stoichiometric amounts of salts. In ammonoxidation, a hydrocarbon is partially oxidized in the presence of ammonia. This conversion is practiced on a large scale for acrylonitrile:[8]

An example of hydrocyanation is the production of adiponitrile from 1,3-butadiene.

Usually for more specialty applications in organic synthesis, nitriles can be prepared by a wide variety of other methods: 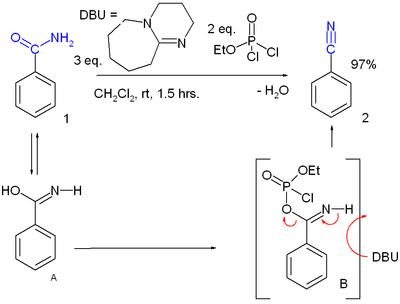 Two intermediates in this reaction are amide tautomer A and its phosphate adduct B.

In one study [10] an aromatic or aliphatic aldehyde is reacted with hydroxylamine and anhydrous sodium sulfate in a dry media reaction for a very small amount of time under microwave irradiation through an intermediate aldoxime.

In the so-called Franchimont Reaction (A. P. N. Franchimont, 1872) an α-bromocarboxylic acid is dimerized after hydrolysis of the cyanogroup and decarboxylation [14]

Nitrile groups in organic compounds can undergo various reactions when subject to certain reactants or conditions. A nitrile group can be hydrolyzed, reduced, or ejected from a molecule as a cyanide ion.

The hydrolysis of nitriles RCN proceeds in the distinct steps under acid or base treatment to achieve carboxamides RC(=O)NH2 and then carboxylic acids RCOOH. The hydrolysis of nitriles is generally considered to be one of the best methods for the preparation of carboxylic acids. However, these base or acid catalyzed reactions have certain limitations and/or disadvantages for preparation of amides. The general restriction is that the final neutralization of either base or acid leads to an extensive salt formation with inconvenient product contamination and pollution effects. Particular limitations are as follows:

In organic reduction the nitrile is reduced by reacting it with hydrogen with a nickel catalyst; an amine is formed in this reaction (see nitrile reduction). Reduction to the imine followed by hydrolysis to the aldehyde takes place in the Stephen aldehyde synthesis

A nitrile is an electrophile at the carbon atom in a nucleophilic addition reactions:

Deprotonating nitriles generates exceptionally powerful nucleophiles that alkylate a wide variety of electrophiles. Key to the exceptional nucleophilicity is the extremely small steric demand of the CN unit combined with the unusual inductive stabilization. These features make nitriles ideal for creating new carbon-carbon bonds in sterically demanding environments and is used in several syntheses of medicinal targets as well as in the synthesis of pharmaceutical medicines. Recent developments have shown that the nature of the metal counter-ion causes different coordination to either the nitrile nitrogen or the adjacent nucleophilic carbon, often with profound differences in reactivity and stereochemistry.[19]

Cyanamides are N-cyano compounds with general structure R1R2N-CN and related to the inorganic parent cyanamide. For an example see: von Braun reaction.