Nitrile rubber, also known as Buna-N, Perbunan, or NBR, is a synthetic rubber copolymer of acrylonitrile (ACN) and butadiene. Trade names include Nipol, Krynac and Europrene.

Nitrile butadiene rubber (NBR) is a family of unsaturated copolymers of 2-propenenitrile and various butadiene monomers (1,2-butadiene and 1,3-butadiene). Although its physical and chemical properties vary depending on the polymer’s composition of nitrile, this form of synthetic rubber is generally resistant to oil, fuel, and other chemicals (the more nitrile within the polymer, the higher the resistance to oils but the lower the flexibility of the material).

It is used in the automotive and aeronautical industry to make fuel and oil handling hoses, seals, and grommets. It is used in the nuclear industry to make protective gloves. NBR’s ability to withstand a range of temperatures from -40 °C to +108 °C makes it an ideal material for aeronautical applications. Nitrile butadiene is also used to create moulded goods, footwear, adhesives, sealants, sponges, expanded foams, and floor mats.

Nitrile rubber is generally resistant to aliphatic hydrocarbons. Nitrile, like natural rubber, can be attacked by ozone, aromatic hydrocarbons, ketones, esters and aldehydes.

Emulsifier (soap), 2-propenenitrile, various butadiene monomers (including 1,3-butadiene, 1,2-butadiene), radical generating activators, and a catalyst are added to polymerization vessels in the production of hot NBR. Water serves as the reaction medium within the vessel. The tanks are heated to 30–40 °C to facilitate the polymerization reaction and to promote branch formation in the polymer. Because several monomers capable of propagating the reaction are involved in the production of nitrile rubber the composition of each polymer can vary (depending on the concentrations of each monomer added to the polymerization tank and the conditions within the tank). One repeating unit found throughout the entire polymer may not exist. For this reason there is also no IUPAC name for the general polymer. The reaction for one possible portion of the polymer is shown below:

Monomers are usually permitted to react for 5 to 12 hours. Polymerization is allowed to proceed to ~70% conversion before a “shortstop” agent (such as dimethyldithioarbamate and diethyl hydroxylamine) is added to react with the remaining free radicals. Once the resultant latex has “shortstopped”, the unreacted monomers are removed through a steam in a slurry stripper. Recovery of unreacted monomers is close to 100%. After monomer recovery, latex is sent through a series of filters to remove unwanted solids and then sent to the blending tanks where it is stabilized with an antioxidant. The yielded polymer latex is coagulated using calcium nitrate, aluminium sulfate, and other coagulating agents in an aluminium tank. The coagulated substance is then washed and dried into crumb rubber.

The process for the production of cold NBR is very similar to that of hot NBR. Polymerization tanks are heated to 5–15 °C instead of 30–40 °C. Under lower temperature conditions, less branching will form on polymers (the amount of branching distinguishes cold NBR from hot NBR). 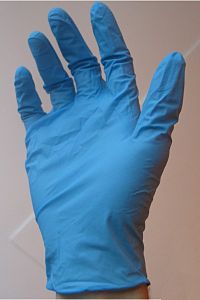 A disposable nitrile rubber glove. Nitrile gloves are available in different colours, the most common being blue and purple[citation needed].

The uses of nitrile rubber include non-latex gloves for the healthcare industry, automotive transmission belts, hoses, O rings, gaskets, oil seals, V belts, synthetic leather, printer's roller, and as cable jacketing; NBR latex can also be used in the preparation of adhesives and as a pigment binder.

Unlike polymers meant for ingestion, where small inconsistencies in chemical composition/structure can have a pronounced effect on the body, the general properties of NBR are not altered by minor structural/compositional differences. The production process itself is not overly complex; the polymerization, monomer recovery, and coagulation processes require some additives and equipment, but they are typical of the production of most rubbers. The necessary apparatus is simple and easy to obtain. For these reasons, the substance is widely produced in poorer countries where labor is relatively cheap. Among the highest producers of NBR are mainland China and Taiwan.

In January 2008 the European Commission imposed fines totaling €34,230,000 on the Bayer and Zeon groups for fixing prices for nitrile butadiene rubber, in violation of the EU ban on cartels and restrictive business practices (Article 81 of the EC Treaty and Article 53 of the EEA Agreement).[3]

Do not use these gloves when working with red fuming nitric acid, as sudden combustion of these two chemicals could cause serious chemical burns. Caution must be taken when working with the acid and the gloves at the same time.