Detergent
For the band, see The Detergents. 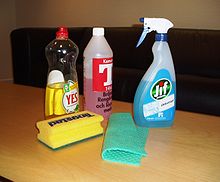 A detergent is a surfactant or a mixture of surfactants with "cleaning properties in dilute solutions."[1] In common usage, "detergent" refers to alkylbenzenesulfonates, a family of compounds that are similar to soap but are less affected by hard water. In most household contexts, the term detergent by itself refers specifically to laundry detergent or dish detergent, as opposed to hand soap or other types of cleaning agents. Detergents are commonly available as powders or concentrated solutions. Detergents work because they are amphiphilic - partly hydrophilic (polar) and partly hydrophobic (non-polar). Their dual nature facilitates the mixture of hydrophobic compounds (like oil and grease) with water. Because air is not hydrophillic, detergents are also foaming agents to varying degrees. Completely non-polar solvents known as degreasers can also remove hydrophobic contaminants but may not dissolve in water because of a lack of polar elements.

Detergents are classified into three broad groupings, depending on the electrical charge of the surfactants.

Typical anionic detergents are alkylbenzenesulfonates. The alkylbenzene portion of these anions is lipophilic and the sulfonate is hydrophilic. Two varieties have been popularized, those with branched alkyl groups and those with linear alkyl groups. The former were largely phased out in economically advanced societies because they are poorly biodegradable.[2] An estimated 6 billion kilograms of anionic detergents are produced annually for domestic markets.

Bile acids, such as deoxycholic acid (DOC), are anionic detergents produced by the liver to aid in digestion and absorption of fats and oils.

Cationic detergents are similar to the anionic ones, with a hydrophobic component, but, instead of the anionic sulfonate group, the cationic surfactants have quaternary ammonium as the polar end. The ammonium center is positively charged.[2]

Zwitterionic detergents possess a net zero charge arising from the presence of equal numbers of +1 and -1 charged chemical groups. Examples include CHAPS.

One of the largest applications of detergents is for cleaning clothing. The formulations are complex, reflecting the diverse demands of the application and the highly competitive consumer market. In general, laundry detergents contain water softeners, surfactants, bleach, enzymes, brighteners, fragrances, and many other agents. The formulation is strongly affected by the temperature of the cleaning water and varies from country to country.

Both carburetors and fuel injector components of Otto engines benefit from detergents in the fuels to prevent fouling. Concentrations are about 300 ppm. Typical detergents are long-chain amines and amides such as polyisobuteneamine and polyisobuteneamide/succinimide.[3]

Soapless soap refers to a soapfree liquid cleanser with a slightly acidic pH.[4] Soapless soaps are used in an array of products. 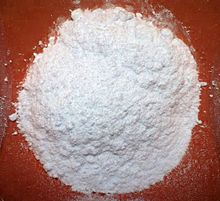