Orange is a city in Orange County, Texas, United States. As of the 2000 census, the city population was 18,643. It is the county seat of Orange County[4], and is the easternmost city in Texas. Located on the Sabine River at the border with Louisiana, it is part of the Beaumont–Port Arthur Metropolitan Statistical Area. Founded in 1836, it is a deep-water port (to the Gulf of Mexico).

This community was originally called Green Bluff for a man named Reason Green, a Sabine River boatman who arrived at this location sometime before 1830. A short time later, in 1840, the town was renamed Madison in honor of President James Madison. [5] To resolve the frequent post office confusion with another Texas community called Madisonville, the town was renamed "Orange" in 1858. The area experienced rapid growth in the late 19th century due to 17 sawmills within the city limits, making Orange the center of the Texas lumber industry.[6] Orange's growth led to the arrival of many immigrants in the late 19th century, including a moderately-sized Jewish population by 1896.[7] In 1898, the County built a courthouse in the city, which eventually burned down and was replaced by the Orange County Courthouse.

The harbor leading into the Port of Orange was dredged in 1914 to accommodate large ships. Ship building during World War I contributed to the growth in population and economy. The Great Depression, not surprisingly, affected the city negatively, and it was not until World War II that the local economy was boosted again. A U.S. Naval Station was installed and additional housing was provided for thousands of defense workers and servicemen and their families. The population increased to just over 60,000 residents.

After the war, the peace-time population decreased to about 25,000. At this time, the Navy Department announced it selected Orange as one of eight locations where it would store reserve vessels. The area of the shipyards provided a favorable location, as the Sabine River furnished an abundant supply of fresh water to prevent saltwater corrosion.[8]
Also during this period the local chemical plants expanded which boosted the economy. The chemical industry continues today as a leading source of revenue to the area. The U.S. Naval Station was changed to a Reserve base in December 1975, and decommissioned completely in September, 2008.

The Port of Orange became the home to the USS Orleck (DD-886), one of the few naval ships remaining that was built at the Orange shipyards during WWII. The city of Orange sustained a direct hit from Hurricane Rita in 2005, causing damage to the ship. The city made the ship be moved because it claimed the city needed the dock space. The Orleck was not allowed to return to the port due to politics (as the city council was wanting the ship cut up and sold for scrap and had a long running feud with the Restoration Association) so a new location was sought, including one in Arkansas and Lake Charles, Louisiana, for a new home. On May 6, 2009, the Lake Charles city council voted in favor of an ordinance authorizing the city to enter into a "Cooperative Endeavor Agreement" with the "USS ORLECK". On May 20, 2010 the ship was moved to Lake Charles. The Grand Opening was on April 10, 2011.[9]

Orange, Texas was heavily damaged by Hurricane Ike on September 13, 2008, and is now in the slow process of recovering and rebuilding.[10] Damage was widespread and severe across Orange County. The 22-foot (6.7 m) storm surge breached the city's levees, caused catastrophic flooding and obliterated everything in its path. The storm surge travelled up the Neches River to also flood Rose City.

Orange received winds at hurricane force. Nearly the entire CITIES of 19,000 people was flooded, anywhere from 6 inches (15 cm) to 15 feet (4.5 m).[11] The mayor of the city said about 375 people, of those who stayed behind during the storm, began to emerge, some needing food, water and medical care.[11] Many dead fish littered streets and properties.[12] Neighbor Bridge City Mayor Kirk Roccaforte estimated that only 14 homes in the city were unaffected by the surge, five of which were in the Oakview addition on Louise Street in Bridge City. The piles of debris and waterlogged furniture placed outside homes by residents beginning to clean up led the mayor to say "The whole city looks like a flea market.[13] During the post-storm cleanup, Bridge City residents found swimming pools had been occupied by jellyfish brought inland with the water.[14] Three people were found dead in Orange County on September 29.[15]

There were 7,310 households out of which 31.6% had children under the age of 18 living with them, 46.5% were married couples living together, 18.3% had a female householder with no husband present, and 31.3% were non-families. 28.3% of all households were made up of individuals and 12.3% had someone living alone who was 65 years of age or older. The average household size was 2.47 and the average family size was 3.01.

The City of Orange hosts several cultural and historical attractions. The Stark Museum of Art, houses one of the finest collections of 19th and 20th century Western American art and artifacts in the country. The collection focuses on the stunning land, dramatic people, and diverse wildlife of the American West. The Museum also holds a significant collection of American Indian art as well as collections of glass and porcelain, and rare books and manuscripts. The museum features the work of artists such as artist/naturalist John James Audubon, Paul Kane, Albert Bierstadt, Thomas Moran, and John Mix Stanley.[19] 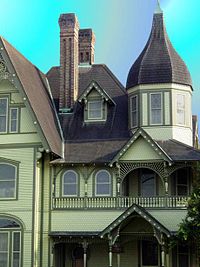 The W.H. Stark House preserves the early days of Orange and lumber barons.

The W. H. Stark House is a careful restoration of an 1894 Victorian home, typical of a wealthy Southeast Texas family. The 15-room, three-storied structure with its many gables, galleries, and distinctive windowed turret, shows the influence of several architectural styles.

The First Presbyterian Church on Green Avenue is a strong example of the classic Greek Revival architecture. Completed in 1912, it was the first air-conditioned public building west of the Mississippi River and its dome is the only opalescent glass dome inside of the United States.

Orange has the distinction of having Exit 880 on Interstate 10 within its city limits, which is the highest numbered exit and mile marker on an interstate highway or freeway in North America.