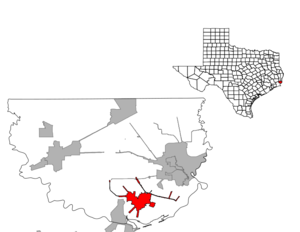 Bridge City is a city in Orange County, , . The population was 8,651 at the 2000 census. The town borders the and Cow Bayou. It is part of the Beaumont&ndash;Port Arthur Metropolitan Statistical Area.

The city was originally named Prairie View, as it was located on the coastal grasslands of the upper Texas coastline. But in 1938, the Port Arthur-Orange Bridge (now known as the Rainbow Bridge) was built, and the unincorporated area took on the name "Bridge City". Despite several previous attempts, the city did not incorporate until 1970.

Bridge City got its name from the fact that one has to cross a bridge to enter the city. Out of the three major roads that enter Bridge City, Chemical Road, HWY 87, and F.M. 1442 - all of them cross a body of water. HWY 87 crosses the Neches River and Cow Bayou - Cow Bayou on the Orange side and the Neches River on the Port Arthur side. Chemical Road crosses a branch off of the Sabine river and Cow Bayou. F.M. 1442 crosses a small creek off Cow Bayou between HWY 105 and the Bridge City City limits. F.M. 1442 also crosses Cow Bayou just north of Orangefield and south of Interstate 10.

In 1990, Bridge City became the first city in Texas to install "leaning" streetlights because of the tall electrical lines near the roadway [http://www.bridgecitytex.com/dynpage.php?pageid=110] .

In 2008, the storm surge generated by caused nearly complete flooding of Bridge City. Mayor Kirk Roccaforte estimated that only 14 homes in the city were unaffected by the surge. The piles of debris and waterlogged furniture placed outside homes by residents beginning to clean up led the mayor to say "The whole city looks like a flea market. [http://www.beaumontenterprise.com/news/local/bridge_city_residents_try_to_dry_out__clean_up_09-19-2008.html]

There were 3,195 households out of which 36.7% had children under the age of 18 living with them, 62.0% were married couples living together, 10.6% had a female householder with no husband present, and 22.5% were non-families. 19.6% of all households were made up of individuals and 8.8% had someone living alone who was 65 years of age or older. The average household size was 2.69 and the average family size was 3.07.

Bridge City was the only city in Orange County to have a growth in population according to the 1990 census [http://www.bridgecitytex.com/dynpage.php?pageid=110] .

Bridge City is served by the .