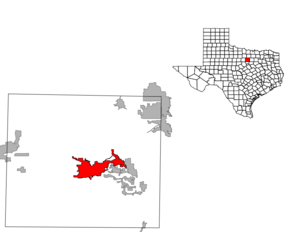 The city was named by the as the Capital of Texas due to the peaches produced by area growers. As such, the peach is celebrated each year at the , which is Weatherford’s largest event and one of the best-attended festivals in Texas.Fact|date=June 2008

Weatherford also has a number of historic homes and buildings. More than 60 Queen Anne, Victorian and other architecturally significant homes built at the turn of the 20th century sit along the tree-lined avenues. Several of these homes are open for tours, arranged by the Parker County Heritage Society, during the Christmas season.

Another landmark is the style , which is located in the geographical center of the county in downtown Weatherford. The building is surrounded by buildings which served other purposes at the turn of the 20th century, including and cat-houses.

In recent years, both the interior and exterior of the courthouse structure have been restored to its original character and attractiveness.

Weatherford is located 25 miles west of Fort Worth on Interstate 20. It is the county seat for Parker County.

The City of Weatherford is served by the and .

Weatherford ISD has classes from pre-kindergarten through high school serving 7,200 students throughout 254 square miles at 11 campuses.

Located at 719 Oak Ridge. Is one of the only elementrary campuses that supports childhood obesity by not providing reccess.

Weatherford College is a 130 year old community college. There are more than 35 study areas and 19 professional/technical programs. Financial aid packages and scholarships are also available. The College was originally built by masons and was one of the first in Texas.

In 1855, Parker County was created by the Texas State Legislature and named for pioneer and State Representative Isaac Parker. Parker was the uncle of , a little girl who was stolen from her home by Indians during the Texas Revolution. Cynthia Ann lived among the Comanche and became the mother of Chief . Later, when she was overtaken in flight with an Indian raiding party, Isaac Parker who recognized her as his long-lost niece.

The Town of Weatherford was named for the State Senator for this district, Jefferson Weatherford of Dallas. According to his cousin, Senator Weatherford never set foot in the town.

The first settlers had arrived less than ten years earlier. They were many Native American attacks between the years of 1846 and 1874. There are several headstones in Parker County that read "Killed by Indians."

The railroad arrived in June . The Santa Fe Depot (which today houses the Weatherford Chamber of Commerce) was built in 1908 under laws, with waiting rooms segregated and separated by the ticket office.

Parker County’s first courthouse was built of rough pine lumber in 1856. It was replaced with a brick one in 1858. The Clock was installed in 1897 for $957. The Courthouse has recently been restored on the inside to bring back its classic beauty and original splendor from the turn of the century.

Cattle drover is buried in Weatherford’s Greenwood Cemetery. After being attacked by Indians in New Mexico in 1867, Loving’s dying wish to his friend, , was to be buried in his home, Parker County. Goodnight brought the body back six hundred miles by wagon for burial. The story is the inspiration behind Texas author ’s , "".

A year earlier, Goodnight had invented the first which catered to cowboys on a cattle drive that would later become known as the .

Boze Ikard, who served with Goodnight and for whom the McMurtry character “Deets” was modeled, was also laid to rest in the Greenwood Cemetery.

Now known as the Capital of the World,Who|date=June 2008 Weatherford is home to hundreds of professional trainers, Hall-of-Fame horses and a life-size bronze cutting horse. “Cutters” from all over the country send their horses here for training or breeding. Several National Cutting Horse Association affiliates hold local competitions on a regular basis. One of Weatherford’s greatest attractions for the cutters in the native soil that is cushioning for a horse’s feet.

Named by the State Legislature as the Peach Capital of Texas, Weatherford and Parker County growers produce many es. The Peach is celebrated each year at the Parker County Peach Festival, Weatherford’s largest event and one of the best-attended festivals in Texas.Fact|date=June 2008 More than 35,000 visitors come to Weatherford for the festival.

is seated at the far left in this photo next to Gen. .]

Weatherford is the place in which one of Texas' greatest authors, Edwin Lanham, was raised, and the slightly-veiled setting for his most critically acclaimed work "The Wind Blew West."

Weatherford is also the birthplace and was the home of , a Broadway star, known for her portrayal of . Her son, , became a TV star, best known as on the television melodrama "". Hagman still makes appearances for special occasions and to assist many Weatherford charities.

Former U.S. Speaker of the House grew up in Weatherford and wrote a book about his youth, "Weatherford Days…a Time of Learning".

Portrait artist moved to Weatherford to be with the love of his life, Weatherford native, Ina Kuteman. Known for his portraits of the rich and famous including , , and , Chandor created gardens that are now open to the public.

Weatherford County has been represented in the Texas State House since by two Republicans, Richard F. "Ric" Williamson (-) and Phillip Stephen King. Originally a Democrat, Williamson switched parties and served until , when he was succeeded by King, one of the more members of the legislature. Williamson's old friend and former legislative colleague, Governor , appointed him to the , of which he became the chairman in . Williamson died of a third on , . He had been a champion of Perry's controversial project.