/ˌnækəˈdoʊtʃɨs/ nak-ə-doh-chəs) is a city in Nacogdoches County, Texas, in the United States. The 2010 census recorded the city's population to be 32,996.[3] It is the county seat of Nacogdoches County[4] and is situated in East Texas. Nacogdoches is a sister city of Natchitoches, Louisiana.

Nacogdoches is the home of Stephen F. Austin State University and of the Association for Business Communication.

Nacogdoches made international headlines in February 2003, after receiving much of the Space Shuttle Columbia disaster debris.

Lake Nacogdoches is located ten miles west of the city.

There were 11,220 households out of which 25.3% had children under the age of 18 living with them, 35.7% were married couples living together, 13.7% had a female householder with no husband present, and 47.1% were non-families. 33.5% of all households were made up of individuals and 9.6% had someone living alone who was 65 years of age or older. The average household size was 2.30 and the average family size was 3.04. 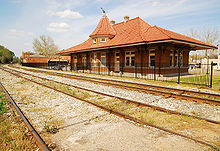 Local promotional literature[specify] describes Nacogdoches as "the oldest town in Texas." Evidence of settlement on the same site dates back to 10,000 years ago. It is near or on the site of Nevantin, the primary village of the Nacogdoche tribe of Caddo Indians."[7][8]

Nacogdoches remained a Caddo Indian settlement until the early 19th century. In 1716 when Spain established a mission there, Nuestra Señora de Guadalupe de los Nacogdoches. That was the first European construction in the area. The "town" of Nacogdoches got started after the Spaniards decided that the French were no longer a threat and that maintaining the mission was too costly. So, in 1772 they ordered all settlers in the area to move to San Antonio. Some were eager to escape the wilderness, but others had to be forced from their homes by soldiers. It was one of the original European settlements in the region, populated by Adaeseños from Fort Los Adaes.[9] 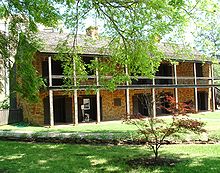 Statue of Gil Y'Barbo at Historic Town Center in Nacogdoches

Colonel Antonio Gil Y'Barbo, a prominent Spanish trader, emerged as the leader of the settlers, and in the spring of 1779, he led a group back to Nacogdoches. Later that summer, Nacogdoches received designation from Spain as a pueblo, or town, thereby making it the first "town" in Texas. Y'Barbo, as lieutenant governor of the new town, established the rules and laws for local government. He laid out streets with the intersecting El Camino Real (now State Highway 21) and La Calle del Norte/North Street (now Business U.S. Highway 59-F) as the central point. On the main thoroughfare, he built a stone house for use in his trading business. The house, or Old Stone Fort as it is known today, became a gateway from the United States to the Texas frontier.[10] 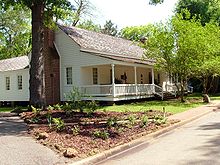 House of Adolph Sterne, the first American mayor of the town, now a museum.

The city has been under more flags than the state of Texas, claiming nine flags. In addition to the Six Flags of Texas, it also flew under the flags of the Magee-Gutierrez Republic, the Long Republic, and the Fredonia Republic. People from the United States began to settle in Nacogdoches in 1820 and Texas' first English-language newspaper was published there.[11] However, the first newspaper published (in the 1700s) was in Spanish. An edition of the newspaper (in Spanish) is preserved and shown at the local Museum.

Thomas Jefferson Rusk was one of the most prominent early Nacogdoches Anglo settlers. A veteran of the Texas Revolution, hero of San Jacinto, he signed the Texas Declaration of Independence and was secretary of war during the Republic of Texas. He was president of the Texas Statehood Commission and served as one of the two first Texas Senators along with Sam Houston. He worked to establish Nacogdoches University in 1845. The old university building still stands and is maintained by local volunteers. Rusk suffered from depression as a result of the untimely death of his wife and killed himself on July 29, 1857.[12]

Sam Houston lived in Nacogdoches for four years prior to the Texas Revolution in 1836 and opened a law office downtown. He courted Ana Raguet, daughter of one of the leading citizens, but Ana rejected him after finding that he was not divorced from his first wife Eliza Allen on Tennessee.

William Goins (Goings, Going), the son of a white mother and black father, maintained a plantation outside Nacogdoches on Goins Hill. He was married to a white woman and owned slaves.[citation needed] He was prominent in providing assistance to the Texas Army during the Revolution.

Aldous Sterne was a merchant of German Jewish extraction who maintained the finest home in town. Frequently visited by famous luminaries such as Sam Houston, Thomas Rusk, Chief Bowles, David Crockett and many others, his diary is one of the best sources for early Nacogdoches history.

In 1859, the first oil well in Texas began operation here, but it was never so well known as Spindletop, drilled in 1901 near Beaumont.[13]

In 1912, the Marx Brothers came to town to perform their singing act at the old Opera House.[citation needed] Their performance was interrupted by a man who came inside shouting, "Runaway mule!" Most of the audience left the building, apparently thinking a runaway mule would provide better entertainment. When they filed back in, Julius (later known as Groucho) began insulting them, saying "Nacogdoches is full of roaches!" and "The jackass is the flower of Tex-ass!" Instead of becoming angry, audience members laughed. Soon afterward, Julius and his brothers decided to try their hand at comedy instead of singing, at which they had barely managed to scrape together a living. A historic plaque commemorating the event is posted in downtown Nacogdoches. Given the location of this formative experience, the Brothers' later decision, during the making of Duck Soup, to name the imaginary country "Freedonia" hardly seems coincidental. In the 8th March 1950 edition of You Bet Your Life Groucho states "I was once pinched in Nacogdoches for playing Euchre on the front porch of a hotel. It happened to be on a Sunday. You're not allowed to play Euchre in Nacogdoches on a Sunday. As a matter of fact, the way I played it they shouldn't have allowed it on Saturday either." Groucho appeared to have a humorous preoccupation with the word Nacogdoches and would often mention it in the show if any contestant came from Texas. John Wayne appeared to have had a similar preoccupation,[citation needed] as he mentioned the town in some of his movies e.g. Big Jake.

In 1997, singer Willie Nelson came to Nacogdoches to perform with his friend, Paul Buskirk, a renowned mandolin player. During his stay, Nelson recorded a number of jazz songs at Encore Studios. In 2004, he released those recordings on an album called Nacogdoche.

On February 1, 2003, the Space Shuttle Columbia broke up during re-entry, depositing debris across Texas. Much of the debris landed in Nacogdoches,[14] and much of the media coverage of the disaster focused on Nacogdoches.

On September 24, 2005, Hurricane Rita struck Nacogdoches as a Category 1 hurricane.[15][16][17] Nacogdoches experienced the same problems Houston was having because of the unprecedented number of people evacuating the Houston-Galveston area. The city's local shelters were already overwhelmed with evacuees that had come from New Orleans because of Hurricane Katrina. Long lines at gas stations, shortages of supplies, food and fuel were widespread. Many Houstonians took the Eastex Freeway (U.S. Highway 59) out of Houston to evacuate through East Texas. Travel times between Nacogdoches and Houston were reported taking about 24–36 hours,[citation needed] when normal travel time is about 2 hours. As a result of Hurricane Rita, U.S. Highway 59 has been designated as an evacuation route by TXDOT, with all of it lanes to be used for contraflow traffic. Nacogdoches was designated as the north end terminus of the contraflow/evacuation route.[18]

On September 13, 2008, Hurricane Ike struck Nacogdoches as a Category 1 hurricane.

Nacogdoches hosts the Texas Blueberry Festival on the second Saturday in June.[19] The county is the top blueberry producer in Texas.[citation needed] The city recently tagged itself as the "Capital of the Texas Forest Country." The community is one of the first Texas Certified Retirement Communities.[20]

Once a Democratic stronghold, Nacogdoches has in recent years moved steadily toward the Republican Party, being represented in the United States Congress and the Texas State Legislature by Republicans. The city in general is very moderate with the co-existence of students of Stephen F. Austin with a left-of-center persuasion, and conservative right-of-center city residents.

According to the City's 2009 Comprehensive Annual Financial Report,[21][dated info] the top employers in the city are:

The structure of the management and coordination of city services is:[22]

At the Federal level, the two U.S. Senators from Texas are Republicans John Cornyn and Kay Bailey Hutchison; Nacogdoches is part of Texas's 1st congressional district, which is currently represented by Republican Louie Gohmert.

The City of Nacogdoches is served by the Nacogdoches Independent School District - Home of the Golden Dragons. A total of nine school districts serve Nacogdoches County.

Nacogdoches is home to Stephen F. Austin State University, which is a state institution of about thirteen thousand students, and is one of the leading forestry schools in the world. Stephen F. Austin is also home of the East Texas Historical Association. Angelina College, a community college based in neighboring Lufkin, operates a branch campus in Nacogdoches. 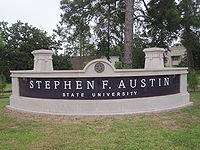 Nacogdoches is served by The Daily Sentinel

Notable residents past and present