Propofol (INN, marketed as Diprivan by AstraZeneca) is a short-acting, intravenously administered hypnotic agent. Its uses include the induction and maintenance of general anesthesia, sedation for mechanically ventilated adults, and procedural sedation. Propofol is also commonly used in veterinary medicine. Propofol is approved for use in more than 50 countries, and generic versions are available.

Chemically, propofol is unrelated to barbiturates and has largely replaced sodium thiopental (Pentothal) for induction of anesthesia because recovery from propofol is more rapid and "clear" when compared with thiopental. Propofol is not considered an analgesic, so opioids such as fentanyl may be combined with propofol to alleviate pain.[1] Propofol has been referred to as "milk of amnesia" (a play on words of milk of magnesia), because of the milk-like appearance of its intravenous preparation.[2]

Propofol is used for induction and maintenance of anesthesia, having largely replaced sodium thiopental for this indication.[1] Propofol is also used to sedate individuals who are receiving mechanical ventilation. In critically ill patients it has been found to be superior to lorazepam both in effectiveness as well as overall cost; as a result, the use of propofol for this indication is now encouraged whereas the use of lorazepam for this indication is discouraged.[3] Propofol is also used for sedation, for example, prior to endoscopic procedures, and has been found to have less prolonged sedation and a faster recovery time compared to midazolam.[4]

Aside from low blood pressure (mainly through vasodilation) and transient apnea following induction doses, one of propofol's most frequent side effects is pain on injection, especially in smaller veins. This pain can be mitigated by pretreatment with lidocaine.[5] Patients show great variability in their response to propofol, at times showing profound sedation with small doses. A more serious but rare side effect is dystonia.[6] Mild myoclonic movements are common, as with other intravenous hypnotic agents. Propofol appears to be safe for use in porphyria, and has not been known to trigger malignant hyperpyrexia.

It has been reported that the euphoria caused by propofol is unlike that caused by other sedation agents, "I even remember my first experience using propofol: a young woman who was emerging from a MAC anesthesia[7] looked at me as though I were a masked Brad Pitt and told me that she felt simply wonderful." —C.F. Ward, M.D.[8]

Propofol has reportedly induced priapism in some individuals.[9][10]

Another recently described rare, but serious, side effect is propofol infusion syndrome. This potentially lethal metabolic derangement has been reported in critically ill patients after a prolonged infusion of high-dose substance in combination with catecholamines and/or corticosteroids.[11] 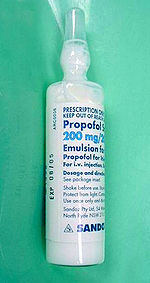 20-mL ampoule of 1% propofol emulsion, as sold in Australia by Sandoz

Propofol was originally developed in the UK by Imperial Chemical Industries as ICI 35868. Clinical trials followed in 1977, using a form solubilised in cremophor EL. However, due to anaphylactic reactions to cremophor, this formulation was withdrawn from the market and subsequently reformulated as an emulsion of a soya oil/propofol mixture in water. The emulsified formulation was relaunched in 1986 by ICI (now AstraZeneca) under the brand name Diprivan (abbreviated version of diisopropyl intravenous anesthetic). The currently available preparation is 1% propofol, 10% soybean oil, and 1.2% purified egg phospholipid (emulsifier), with 2.25% of glycerol as a tonicity-adjusting agent, and sodium hydroxide to adjust the pH. Diprivan contains EDTA, a common chelation agent, that also acts alone (bacteriostatically against some bacteria) and synergistically with some other antimicrobial agents. Newer generic formulations contain sodium metabisulfite or benzyl alcohol as antimicrobial agents. Propofol emulsion is a highly opaque white fluid due to the scattering of light from the tiny (~150 nm) oil droplets that it contains.

A water-soluble prodrug form, fospropofol, has recently been developed and tested with positive results. Fospropofol is rapidly broken down by the enzyme alkaline phosphatase to form propofol. Marketed as Lusedra, this new formulation may not produce the pain at injection site that often occurs with the traditional form of the drug. The US Food and Drug Administration approved the product in 2008.[12]

Propofol has been proposed to have several mechanisms of action,[13][14][15] both through potentiation of GABAA receptor activity, thereby slowing the channel-closing time,[16][17][18] and also acting as a sodium channel blocker.[19][20] Recent research has also suggested that the endocannabinoid system may contribute significantly to propofol's anesthetic action and to its unique properties.[21]

Propofol is highly protein-bound in vivo and is metabolised by conjugation in the liver.[22] Its rate of clearance exceeds hepatic blood flow, suggesting an extrahepatic site of elimination as well. The half life of elimination of propofol has been estimated at between 2 and 24 hours. However, its duration of clinical effect is much shorter, because propofol is rapidly distributed into peripheral tissues. When used for IV sedation, a single dose of propofol typically wears off within minutes. Propofol is versatile; the drug can be given for short or prolonged sedation as well as for general anesthesia. Its use is not associated with nausea as is often seen with opioid medications. These characteristics of rapid onset and recovery along with its amnestic effects[23] have led to its widespread use for sedation and anesthesia.

EEG research upon those undergoing general anesthesia with propofol finds that it causes a prominent reduction in the brain's information integration capacity at gamma wave band frequencies.[24]

The respiratory effects of propofol are potentiated by other respiratory depressants, including benzodiazepines.[25]

As with any other general anesthetic agent, propofol should be administered only where appropriately trained staff and facilities for monitoring are available, as well as proper airway management, a supply of supplemental oxygen, artificial ventilation and cardiovascular resuscitation.[26]

There are reports of self-administration of propofol for recreational purposes.[27][28] Short-term effects include mild euphoria, hallucinations, and disinhibition.[29][30] Long-term use has been reported to result in addiction.[31][32] Such use of the drug has been described amongst medical staff, such as anesthetists who have access to the drug.[31] Misuse is reported to be more common among anesthetists on rotations with short rest periods, as recreational users report rousing to a well-rested state.[33] Recreational use of the drug is relatively rare due to its potency and the level of monitoring required to take it safely. Propofol has not yet been scheduled by the US Drug Enforcement Administration.[33][34] The steep dose-response curve of the drug makes potential misuse very dangerous without proper monitoring, and at least three deaths from self-administration have been recorded.[35][36]

Attention to the risks of off-label use of propofol increased in August 2009 due to the Los Angeles County coroner's conclusion that Michael Jackson died from a mixture of propofol and the benzodiazepine drugs lorazepam on top of diazepam ingested earlier.[37][38][39][40] According to a July 22, 2009, search warrant affidavit unsealed by the district court of Harris County, Texas, Jackson's personal physician, Conrad Murray, administered 25 milligrams of propofol diluted with lidocaine shortly before Jackson's death.[38][39][41] Propofol is at the centre of the current case People of the State of California v. Conrad Robert Murray.[42]. On November 7, 2011, jurors found Murray guilty of involuntary manslaughter in Jackson's death. Sentencing was set for November 29, 2011, with Murray facing up to four years in prison.[43]

On June 4, 2010 Teva Pharmaceutical Industries Ltd., an Israel-based pharmaceutical firm, and major supplier of the drug, announced that they would no longer manufacture it. This aggravates an already existing shortage, caused by manufacturing difficulties at Teva and Hospira. (AstraZeneca has not made propofol in some time.) A Teva spokesperson attributed the halt to ongoing process difficulties, and a number of pending lawsuits related to the drug.[44]