In excitable cells such as neurons, myocytes, and certain types of glia, sodium channels are responsible for the rising phase of action potentials.

Sodium channels consist of a large α subunit that associates with other proteins, such as β subunits. An α subunit forms the core of the channel and is functional on its own. When the α subunit protein is expressed by a cell, it is able to form channels that conduct Na+ in a voltage-gated way, even if β subunits or other known modulating proteins are not expressed. When accessory proteins assemble with α subunits, the resulting complex can display altered voltage dependence and cellular localization.

The α-subunit has four repeat domains, labeled I through IV, each containing six membrane-spanning regions, labeled S1 through S6. The highly conserved S4 region acts as the channel's voltage sensor. The voltage sensitivity of this channel is due to positive amino acids located at every third position. When stimulated by a change in transmembrane voltage, this region moves toward the extracellular side of the cell membrane, allowing the channel to become permeable to ions. The ions are conducted through a pore, which can be broken into two regions. The more external (i.e., more extracellular) portion of the pore is formed by the "P-loops" (the region between S5 and S6) of the four domains. This region is the most narrow part of the pore and is responsible for its ion selectivity. The inner portion (i.e., more cytoplasmic) of the pore is formed by the combined S5 and S6 regions of the four domains. The region linking domains III and IV is also important for channel function. This region plugs the channel after prolonged activation, inactivating it.

Voltage-gated sodium channels have three types of states: deactivated (closed), activated (open), and inactivated (closed). Channels in the deactivated state are thought to be blocked on their intracellular side by an "activation gate", which is removed in response to stimulation that opens the channel. The ability to inactivate is thought to be due to a tethered plug (formed by domains III and IV of the alpha subunit), called an inactivation gate, that blocks the inside of the channel shortly after it has been activated. During an action potential the channel remains inactivated for a few milliseconds after depolarization. The inactivation is removed when the membrane potential of the cell repolarizes following the falling phase of the action potential. This allows the channels to be activated again during the next action potential. Genetic diseases that alter sodium channel inactivation can cause muscle stiffness or epileptic seizures because of the introduction of a so-called window current, during which sodium channels are tonically active, causing muscle and/or nerve cells to become over-excited.

The temporal behaviour of sodium channels can be modeled by a Markovian scheme or by the Hodgkin-Huxley-type formalism. In the former scheme, each channel occupies a distinct state with differential equations describing transitions between states; in the latter, the channels are treated as a population that are affected by three independent gating variables. Each of these variables can attain a value between 1 (fully permeant to ions) and 0 (fully non-permeant), the product of these variables yielding the percentage of conducting channels. The Hodgkin-Huxley model can be shown to be equivalent to a Markovian model.

Impermeability to other ions

The pore of sodium channels contains a selectivity filter made of negatively charged amino acid residues, which attract the positive Na+ ion and keep out negatively charged ions such as chloride. The cations flow into a more constricted part of the pore that is 0.3 by 0.5 nm wide, which is just large enough to allow a single Na+ ion with a water molecule associated to pass through. The larger K+ ion cannot fit through this area. Differently sized ions also cannot interact as well with the negatively charged glutamic acid residues that line the pore.

Voltage-gated sodium channels normally consist of an alpha subunit that forms the ion conduction pore and one to two beta subunits that have several functions including modulation of channel gating.[4] Expression of the alpha subunit alone is sufficient to produce a functional channel. 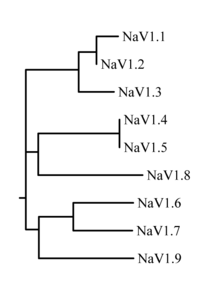 The family of sodium channels has nine known members, with amino acid identity >50% in the transmembrane and extracellular loop regions. A standardized nomenclature for sodium channels is currently used and is maintained by the IUPHAR.[5][6]

The proteins of these channels are named Nav1.1 through Nav1.9. The gene names are referred to as SCN1A through SCN11A (the SCN6/7A gene is part of the Nax sub-family and has uncertain function). The likely evolutionary relationship between these channels, based on the similarity of their amino acid sequences, is shown in figure 1. The individual sodium channels are distinguished not only by differences in their sequence but also by their kinetics and expression profiles. Some of this data is summarized in table 1, below.

Sodium channel beta subunits are type 1 transmembrane glycoproteins with an extracellular N-terminus and a cytoplasmic C-terminus. As a member of the Ig superfamily, beta subunits contain a prototypic V-set Ig loop in their extracellular domain. Interestingly, beta subunits share no homology with their counterparts of calcium and potassium channels.[8] Instead, they are homologous to neural cell adhesion molecules (CAMs) and the large family of L1 CAMs. There are four distinct betas named in order of discovery: SCN1B, SCN2B, SCN3B, SCN4B (table 2). Beta 1 and beta 3 interact with the alpha subunit non-covalently while beta 2 and beta 4 associate with alpha via disulfide bond.[9]

In addition to regulating channel gating, sodium channel beta subunits also modulate channel expression and form links to the intracelluar cytoskeleton via ankyrin and spectrin.[4][10][11] Voltage-gated sodium channels also assemble with a variety of other proteins, such as FHF proteins (Fibroblast growth factor Homologous Factor), calmodulin, cytoskeleton or regulatory kinases,[12][13][14][15][16] which form a complex with sodium channels, influencing its expression and/or function. Several beta subunits interact with one or more extracellular matrix (ECM) molecules. Contactin, also known as F3 or F11, associates with beta 1 as shown via co-immunoprecipitation.[17] Fibronectin-like (FN-like) repeats of Tenascin-C and Tenascin-R bind with beta 2 in contrast to the Epidermal growth factor-like (EGF-like) repeats that repel beta2.[18] A disintegrin and metalloproteinase (ADAM) 10 sheds beta 2's ectodomain possibly inducing neurite outgrowth.[19] Beta 3 and beta 1 bind to neurofascin at Nodes of Ranvier in developing neurons.[20]

Ligand-gated sodium channels are activated by binding of a ligand instead of a change in membrane potential.

They are found e.g. in the neuromuscular junction as nicotinic receptors, where the ligands are acetylcholine molecules. Most channels of this type are permeable to potassium to some degree as well as to sodium.

Voltage-gated sodium channels play an important role in action potentials. If enough channels open when there is a change in the cell's membrane potential, a small but significant number of Na+ ions will move into the cell down their electrochemical gradient, further depolarizing the cell. Thus, the more Na+ channels localized in a region of a cell's membrane, the faster the action potential will propagate, and the more excitable that area of the cell will be. This is an example of a positive feedback loop. The ability of these channels to assume a closed-inactivated state causes the refractory period and is critical for the propagation of action potentials down an axon.

Na+ channels both open and close more quickly than K+ channels, producing an influx of positive charge (Na+) toward the beginning of the action potential and an efflux (K+) toward the end.

Ligand-gated sodium channels, on the other hand, create the change in the membrane potential in the first place, in response to the binding of a ligand to it.

The following toxins modify the gating of sodium channels: