The economy of Costa Rica heavily depends on tourism, agriculture, and electronics exports. Poverty has been reduced over the past 15 years, and a social safety net put into place. According to the CIA World Factbook, Costa Rica's GDP per capita is US$10,900 (2009); however, there is a lack of maintenance and new investment in infrastructure, 16% of the people living below the poverty line and 7.8% (2009) unemployed. The Costa Rican economy grew nearly 5% in 2006 after experiencing 4 years of slow economic growth.[not in citation given][5]

Inflation rose to 22.5% in 1995, dropped to 11.1% in 1997, 12% in 1998, 11% in 1999 and 13% in 2008. Measures taken by the Central Bank have reduced inflation substantially to 4.3% in 2009, and a projected 5.8% for 2010. Curbing inflation, reducing the deficit, and improving public sector efficiency through an anti-corruption drive, remain key challenges to the government. Previous political resistance to privatization had stalled liberalization efforts. However, after the signing of CAFTA, Costa Rica has now opened to competition its insurance and telecommunications markets.

Costa Rica's economy emerged from recession in 1997 and has shown strong aggregate growth since then. After 6.2% growth in 1998, GDP grew a substantial 8.3% in 1999, led by exports.Nat

The strength in the nontraditional export and tourism sector is masking a relatively lackluster performance by traditional sectors, including agriculture. The central government deficit decreased to 3.2% of GDP in 1999, down from 3.3% from the year before. On a consolidated basis, including Central Bank losses and parastatal enterprise profits, the public sector deficit was 2.3% of GDP.

Controlling the budget deficit remains the single biggest challenge for the country's economic policy makers, as interest costs on the accumulated central government debt consumes the equivalent of 30% of the government's total revenues. This limits the resources available for investments in the country's deteriorated public infrastructure, investments in many cases that would result in higher quality infrastructure if they were better planned.

Costa Rica's major economic resources are its fertile land and frequent rainfall, its well-educated population, and its location in the Central American isthmus, which provides easy access to North and South American markets and direct ocean access to the European and Asian Continents. Costa Rica has two seasons, both of which have their own agricultural resources: the tropical wet and dry seasons. One-fourth of Costa Rica's land is dedicated to national forests, often adjoining beaches, which has made the country a popular destination for affluent retirees and ecotourists.It has one of the best economies in Latin America In terms of the 2008 Environmental Performance Index ranking, Costa Rica is 5th in the world, up from the 15th place in 2006.[6] 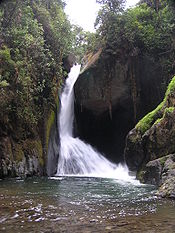 With a $1.92-billion-a-year tourism industry, Costa Rica stands as the most visited nation in the Central American region, with 1.9 million foreign visitors in 2007,[7] thus reaching a rate of foreign tourists per capita of 0.46, one of the highest in the Caribbean Basin, and above other popular destinations such as Mexico (0.21), Dominican Republic (0.38), and Brazil (0.03).

Ecotourism is extremely popular with the many tourists visiting the extensive national parks and protected areas around the country. Costa Rica was a pioneer in this type of tourism and the country is recognized as one of the few with real ecotourism.[8] Other important market segments are adventure, and sun and beaches. Most of the tourists come from the U.S. and Canada (46%), and the E.U. (16%),[9] the prime market travelers in the world, which translates into a relatively high expenditure per tourist of $1000 per trip. In terms of 2008 Travel and Tourism Competitiveness Index (TTCI), Costa Rica reached the 44th place in the world ranking, being the first among Latin American countries, and second if the Caribbean is included.[10] Just considering the subindex measuring human, cultural, and natural resources, Costa Rica ranks in the 24th place at a worldwide level, and 7th when considering just the natural resources criteria. The TTCI report also notes Costa Rica's main weaknesses, ground transport infrastructure (ranked 113th), and safety and security (ranked 128th).[11] [12]

Intel microprocessor facility in Costa Rica is responsible for 20% of exports and 4,9% of the country's GDP.

Costa Rica used to be known principally as a producer of bananas and coffee. Even though coffee, bananas, pineapple, sugar, lumber, wood products and beef are still important exports, in recent times electronics, pharmaceuticals, financial outsourcing, software development, and ecotourism have become the prime industries in Costa Rica's economy. High levels of education among its residents make the country an attractive investing location.

The country has successfully attracted important investments by such companies as Intel Corporation, which employs nearly 3,500 people at its custom built $300 million microprocessor plant; Procter & Gamble, which is establishing its administrative center for the Western Hemisphere in Costa Rica; and Abbott Laboratories and Baxter Healthcare from the health care products industry likewise. Manufacturing and industry's contribution to GDP overtook agriculture over the course of the 1990s, led by foreign investment in Costa Rica's free trade zones. Well over half of that investment has come from the U.S. In 2006 Intel's microprocessor facility alone was responsible for 20% of Costa Rican exports and 4.9% of the country's GDP.[13][14] 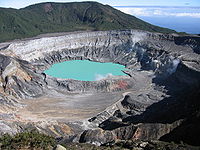 Poás Volcano Crater is one of the country's main tourist attractions.

Trade with South East Asia and Russia has boomed during 2004 and 2005, and the country obtained full Asia-Pacific Economic Cooperation Forum (APEC) membership by 2007 (the country became an observer in 2004). In 2011 the Financial Times Intelligent Unit awarded Costa Rica with the fDi’s Caribbean and Central American Country of the Future 2011/12 for its successful record in attracting FDI into the country, and being the number one destination country in the region in terms of foreign direct investment (FDI) project numbers since 2003. In the previous assessment for the 2009/10 ranking the country had ranked second after Puerto Rico.[15][16]

The country has not discovered sources of fossil fuels—apart from minor coal deposits—but its mountainous terrain and abundant rainfall have permitted the construction of a dozen hydroelectric power plants, making it self-sufficient in all energy needs, except oil for transportation. Costa Rica exports electricity to Central America and has the potential to become a major electricity exporter if plans for new generating plants and a regional distribution grid are realized. Mild climate and trade winds make neither heating nor cooling necessary, particularly in the highland cities and towns where some 90% of the population lives.

Costa Rica's infrastructure has suffered from a lack of maintenance and new investment. The country has an extensive road system of more than 30,000 kilometers, although much of it is in disrepair. Most parts of the country are accessible by road. The main highland cities in the country's Central Valley are connected by paved all-weather roads with the Atlantic and Pacific coasts and by the Pan American Highway with Nicaragua and Panama, the neighboring countries to the North and the South. Costa Rica's ports are struggling to keep pace with growing trade. They have insufficient capacity, and their equipment is in poor condition. The railroad didn't function for several years, until recent government effort to reactivate it for city transportation.

The government hopes to bring foreign investment, technology, and management into the telecommunications and electrical power sectors, which are monopolies of the state. However, political opposition to opening these sectors to private participation has stalled the government's efforts.

Costa Rica has a reputation as one of the most stable, prosperous, and among the least corrupt in Latin America.[20] However, in fall 2004, three former Costa Rican presidents (Jose Maria Figueres, Miguel Angel Rodríguez, and Rafael Angel Calderon) were investigated on corruption charges related to the issuance of government contracts, and several of the legal proceeding are still open.

Costa Rica has sought to widen its economic and trade ties, both within and outside the region. Costa Rica signed a bilateral trade agreement with Mexico in 1994, which was later amended to cover a wider range of products. Costa Rica joined other Central American countries, plus the Dominican Republic, in establishing a Trade and Investment Council with the United States in March 1998.

Costa Rica also is a member of the Cairns Group which is pursuing global agricultural trade liberalization in the World Trade Organization and helping to maintain the proper economy level in Costa Rica.