Criticism of the World Trade Organization

Criticism of the World Trade Organization 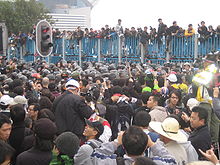 Protestors clashing with Hong Kong police in the Wan Chai waterfront area during the WTO Ministerial Conference of 2005.

Critics contend that smaller countries in the WTO wield little influence, and despite the WTO aim of helping the developing countries, the politicians representing the most influential nations in the WTO (and within those countries or between them, influential private business interests) focus on the commercial interests of profit-making companies rather than the interests of all.[citation needed] Martin Khor argues that the WTO does not manage the global economy impartially, but in its operation has a systematic bias toward rich countries and multinational corporations, harming smaller countries which have less negotiation power. Some examples of this bias are:

Khor argues that developing countries have not benefited from the WTO Agreements of the Uruguay Round, and, therefore, the credibility of the WTO trade system could be eroded. According to Khor, "one of the major categories of 'problems of implementation of the Uruguay Round' is the way the Northern countries have not lived up to the spirit of their commitments in implementing (or not implementing) their obligations agreed to in the various Agreements."[2] Khor also believes that the Doha Round negotiations "have veered from their proclaimed direction oriented to a development-friendly outcome, towards a 'market access' direction in which developing countries are pressurised to open up their agricultural, industrial and services sectors."[3] Jagdish Bhagwati asserts however that there is greater tariff protection on manufacturers in the poor countries, which are also overtaking the rich nations in the number of anti-dumping filings.[4]

Other critics claim that the issues of labor and environment are steadfastly ignored. Steve Charnovitz, former Director of the Global Environment and Trade Study (GETS), believes that the WTO "should begin to address the link between trade and labor and environmental concerns." He also argues that "in the absence of proper environmental regulation and resource management, increased trade might cause so much adverse damage that the gains from trade would be less than the environmental costs."[5] Further, labor unions condemn the labor rights record of developing countries, arguing that to the extent the WTO succeeds at promoting globalization, then in equal measure do the environment and labor rights suffer.[6] On the other side, Khor responds that "if environment and labor were to enter the WTO system [...] it would be conceptually difficult to argue why other social and cultural issues should also not enter." He also argues that "trade measures have become a vehicle for big corporations and social organizations in promoting their interests."[7]

Bhagwati is also critical towards "rich-country lobbies seeking on imposing their unrelated agendas on trade agreements." According to Bhagwati, these lobbies and especially the "rich charities have now turned to agitating about trade issues with much energy understanding."[8] Therefore, both Bhagwati and Arvind Panagariya have criticized the introduction of TRIPs into the WTO framework, fearing that such non-trade agendas might overwhelm the organization's function. According to Panagariya, "taken in isolation, TRIPs resulted in reduced welfare for developing countries and the world as a whole."[9] Bhagwati asserts that "intellectual property does not belong in the WTO, since protecting it is simply a matter of royalty collection [...] The matter was forced onto the WTO's agenda during the Uruguay Round by the pharmaceutical and software industries, even though this risked turning the WTO into a glorified collection agency."[10]

For a discussion on the incorporation of labor rights into the WTO, see Labour Standards in the World Trade Organisation.

Other critics have characterized the decision making in the WTO as over-simplified, ineffective, unrepresentative and non-inclusive; more active participants, representing more diverse interests and objectives, have complicated WTO decision-making, and the process of "consensus-building" has broken down. They argue that the GATT decision making worked in the past because there were fewer countries actively engaged and there was no compulsion for all countries to adhere to the results. They have thus proposed the establishment of a small, informal steering committee (a "consultative board") that can be delegated responsibility for developing consensus on trade issues among the member countries.[11] The Third World Network has called the WTO "the most non-transparent of international organisations", because "the vast majority of developing countries have very little real say in the WTO system".[12]

Many non-governmental organizations, such as the World Federalist Movement, are calling for the creation of a WTO parliamentary assembly to allow for more democratic participation in WTO decision making.[13] Dr Caroline Lucas recommended that such an assembly "have a more prominent role to play in the form of parliamentary scrutiny, and also in the wider efforts to reform the WTO processes, and its rules".[14] However, Dr Raoul Marc Jennar argues that a consultative parliamentary assembly would be ineffective for the following reasons:

The lack of transparency is often seen as a problem for democracy. Politicians can negotiate for regulations that would not be possible accepted in a democratic process in their own nations. "Some countries push for certain regulatory standards in international bodies and then bring those regulations home under the requirement of harmonization and the guise of multilateralism."[16] This is often referred to as Policy Laundering.

Critics of the WTO