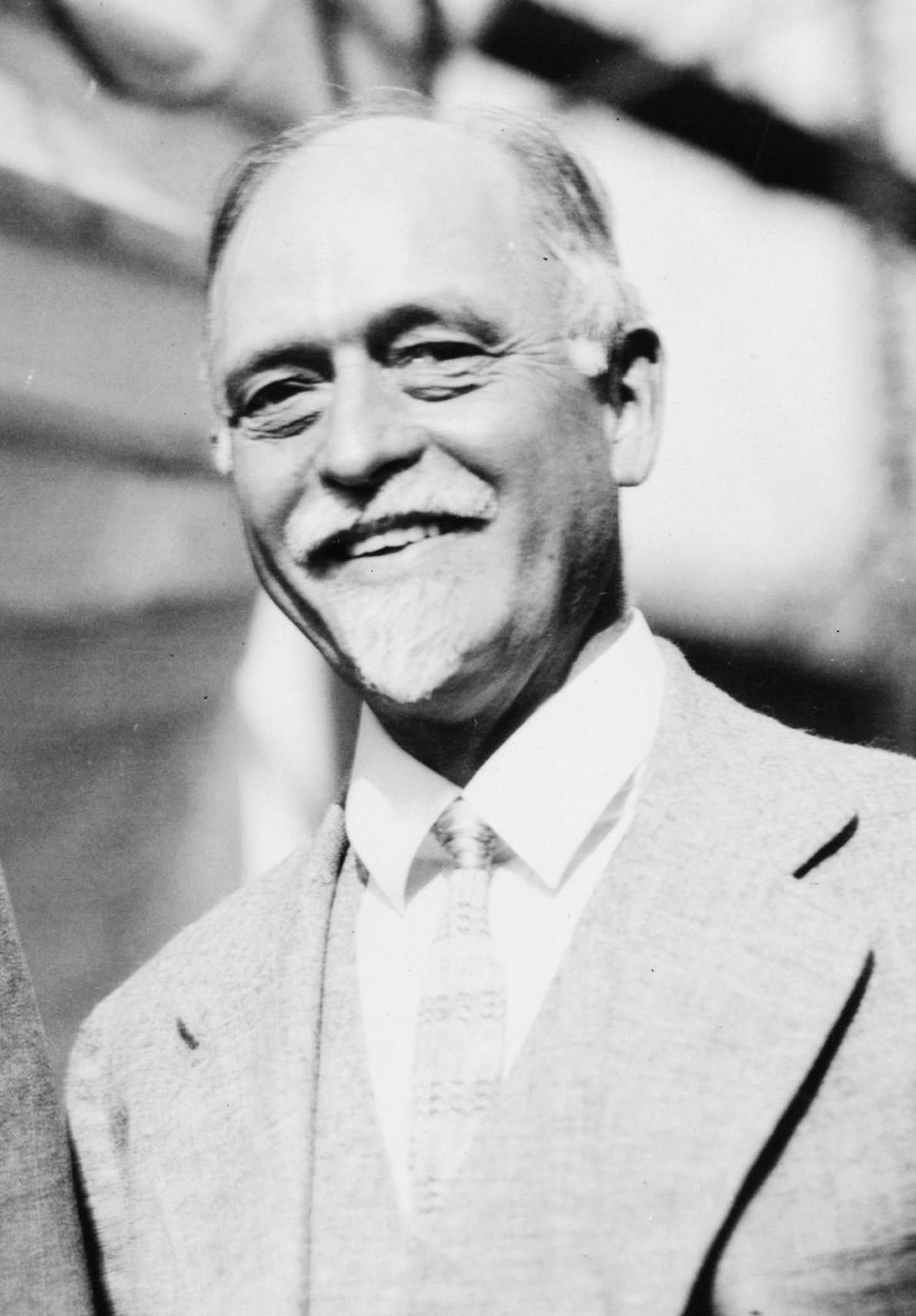 Irving Fisher ( , New York &ndash; , New York) was an American economist, health campaigner, and eugenicist, and one of the earliest American neoclassical economists and, although he was perhaps the first celebrity economist, his reputation today is probably higher than it was in his lifetime. Several concepts are named after him, including the , and .

Fisher's father was a teacher and Congregational minister, who raised his son to believe he must be a useful member of society. The young Irving had mathematical ability and a flair for invention. A week after he was admitted to , his father died at age 53. Irving carried on, however, supporting his mother, brother, and himself, mainly by tutoring. He graduated from Yale with a B.A degree in 1888, where he was a member of .

Fisher's best subject was , but better matched his social concerns. He went on to write a doctoral thesis combining both subjects, on mathematical economics. Irving was granted the first Yale Ph.D. in economics, in 1891. His advisors were the physicist and the economist . Fisher did not realise at the outset that there was already a substantial European literature on mathematical economics. Nevertheless, his thesis made a contribution European masters such as recognised as first rate. He constructed a wonderful machine of pumps and levers to complement and illustrate his thesis. While his books and articles on economic topics exhibited unusual (for the time) mathematical sophistication, Fisher always wished to bring his analysis to life and to present his theories in a very lucid manner.

This research into basic theory did not touch the great social issues of the day. Monetary economics "did" and this became the main focus of Fisher’s work. In the 1890s the United States was divided over the question of the monetary standard. Should the dollar float, be fixed in terms of gold or silver, or some combination of the two? To opt for one system was to choose between West and East, farmer and financier, debtor and creditor, …. Fisher’s "Appreciation and interest" was an abstract analysis of the behaviour of interest rates when the price level is changing. It emphasised the distinction between real and monetary rates of interest which is fundamental to the modern analysis of inflation. However Fisher believed that investors and savers—people in general—were afflicted in varying degrees by “”; they could not see past the money to the goods the money could buy. In an ideal world, changes in the price level would have no effect on production or employment. In the actual world with money illusion, inflation (and deflation) did serious harm.

Fisher was a prolific writer, producing journalism, as well as technical books and articles, addressing the problems of the First World War, the prosperous 1920s and the depressed 1930s. Fisher was an enthusiastic supporter of .

Money and the price level

Fisher's theory of the price level was the following variant of the . Let "M"=stock of money, "P"=price level, "T"=amount of transactions carried out using money, and "V"= the velocity of circulation of money. Fisher then proposed that these variables are interrelated by the :

Fisher was also the first economist to distinguish clearly between real and s:

For more than forty years, Fisher elaborated his vision of the damaging “dance of the dollar” and devised schemes to “stabilise” money, i.e. to stabilise the price level. He was one of the first to subject macroeconomic data, including the money stock, interest rates, and the price level, to statistical analysis. In the 1920s, he introduced the technique later called s. In 1973, the "Journal of Political Economy" reprinted his 1926 paper on the statistical relation between and , retitling it as "I discovered the ". Index numbers played an important role in his monetary theory, and his book "The Making of Index Numbers" has remained influential down to the present day.

The theory of interest and capital

While most of Fisher's energy went into "causes" and business ventures, and the better part of his scientific effort was devoted to monetary economics, he is best remembered today for his theory of interest and capital, studies of an ideal world from which the real world deviated at its peril. His most enduring intellectual work has been his theory of capital (economics), , and , first exposited in his "The Nature of Capital and Income" (1906) and elaborated on in "The Rate of Interest" (1907). His 1930 treatise, "The Theory of Interest", summed up a lifetime's work on capital, , s, and the determinants of s, including the rate of .

Fisher saw that subjective economic value is not only a function of the amount of goods and services owned or exchanged but also of the moment in time when they are purchased. A good available now has a different value than the same good available at a later date; value has a time as well as a quantity dimension. The of goods available at a future date, in terms of goods sacrificed now, is measured by the . Fisher made free use of the standard diagrams used to teach undergraduate economics, but labelled the axes "consumption now" and "consumption next period" instead of, e.g., "apples" and "oranges." The resulting theory, one of considerable power and insight, was exposited in considerable detail in "The Theory of Interest"; for a concise exposition, click [http://cepa.newschool.edu/het/essays/capital/fisherinvest.htm here.]

This theory, since generalized to the case of "K" goods and "N" periods (including the case of infinitely many periods) using the notion of a , has become the canonical theory of capital and interest in contemporary economics; for an exposition see Gravelle and Rees (2004). The nature and scope of this theoretical advance was not fully appreciated, however, until Hirshleifer's (1958) reexposition, so that Fisher did not live to see this theory's ultimate triumph.

The stock market and the subsequent cost Fisher much of his personal wealth and academic reputation. He famously predicted, a few days before the Stock Market Crash of 1929, "Stock prices have reached what looks like a permanently high plateau." " Irving Fisher stated on October 21st that the market was "only shaking out of the lunatic fringe" and went on to explain why he felt the prices still had not caught up with their real value and should go much higher. On Wednesday, October 23rd, he announced in a banker’s meeting “security values in most instances were not inflated.” For months after the Crash, he continued to assure investors that a recovery was just around the corner. Once the was in full force, he did warn that the ongoing drastic deflation was the cause of the disastrous cascading insolvencies then plaguing the American economy because deflation increased the real value of debts fixed in dollar terms. Fisher was so discredited by his 1929 pronouncements and by the failure of a firm he had started that few people took notice of his "debt-deflation" analysis of the Depression. People instead eagerly turned to the ideas of Keynes. Fisher's debt-deflation scenario has made something of a comeback since 1980 or so.

The lay public perhaps knew Fisher best as a health campaigner and eugenicist. In 1898 he found that he had , the disease that killed his father. After three years in sanatoria, Fisher returned to work with even greater energy and with a second vocation as a health campaigner. He advocated vegetarianism, avoiding red meat, and exercise, writing "How to Live: Rules for Healthful Living Based on Modern Science", a USA best seller.

In 1912 he also became a member of the scientific advisory to the and served as the secretary of the .

Fisher was also a strong believer in the now-ridiculed "focal sepsis" theory of physician Henry Cotton, who believed that mental illness was attributable to infectious material residing in the roots of the teeth, recesses in the bowels, and other places in the human body, and that surgical removal of this infectious material would cure the patient's mental disorder. Fisher believed in these theories so thoroughly that when his daughter Margaret was diagnosed with Schizophrenia, Fisher had numerous sections of her bowel and colon removed at Dr. Cotton's hospital, eventually resulting in his daughter's death. ["Madhouse: A Tragic Tale of Megalomania and Modern Medicine", Andrew Scull, Yale University Press, 2005]

* website:
** [http://cepa.newschool.edu/het/profiles/fisher.htm Irving Fisher, 1867-1947.] Includes a photograph of the young Fisher. For a photograph of the older man, see [http://www.york.ac.uk/depts/maths/histstat/people/fisher_i.gifIrving Fisher] on the [http://www.york.ac.uk/depts/maths/histstat/people/welcome.htm Portraits of Statisticians] page.
** [http://cepa.newschool.edu/het/essays/capital/fisherinvest.htm Irving Fisher's Theory of Investment.]