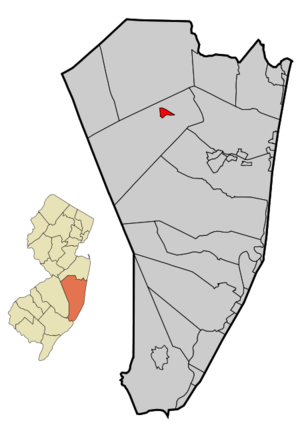 Lakehurst was incorporated as a borough by an Act of the on , , from portions of Manchester Township, based on the results of a referendum held on , .

There were 870 households out of which 41.4% had children under the age of 18 living with them, 57.5% were married couples living together, 13.4% had a female householder with no husband present, and 23.9% were non-families. 19.8% of all households were made up of individuals and 6.6% had someone living alone who was 65 years of age or older. The average household size was 2.90 and the average family size was 3.33.

The town of Lakehurst first reached international fame as a winter resort around the turn of the 20th century, following the opening of the Pine Tree Inn in 1898. In 1911, the rope factory in the town burned down, prompting the formation of a volunteer .

Lakehurst is frequently cited as the site of the "Hindenburg" disaster, when on , , the German "Hindenburg" caught fire at the . In fact, the Hindenburg exploded over portions of Manchester Township, not Lakehurst. None of the Lakehurst Naval Air Station lies within the Borough of Lakehurst.

Lakehurst is governed under the Borough form of New Jersey municipal government. The government consists of a Mayor and a Borough Council comprising six council members, with all positions elected at large. A Mayor is elected directly by the voters to a four-year term of office. The Borough Council consists of six members elected to serve three-year terms on a staggered basis, with two seats coming up for election each year. ["2005 New Jersey Legislative District Data Book", , April 2005, p. 49.]

Approximately 180 public school students from Lakehurst Borough attend in Manchester Township, as part of a with the . [ [http://www.manchestertwp.org/district/about.html About Our School District] , Manchester Township School District. Accessed , . "We are also the receiving district for approximately 180 high school students from neighboring Lakehurst Borough."]

is the main highway through the borough, which lies at the western end of . County Route 547 connects from the North after paralleling the eastern edge of .

Lakehurst is located on the former Southern Division Main Line. The Barnegat Branch formerly extended from Lakehurst through Toms River and Beachwood down to Barnegat.

Lakehurst is being considered as the southern terminus of the planned Monmouth-Ocean-Middlesex Line, which would closely follow the CNJ line.